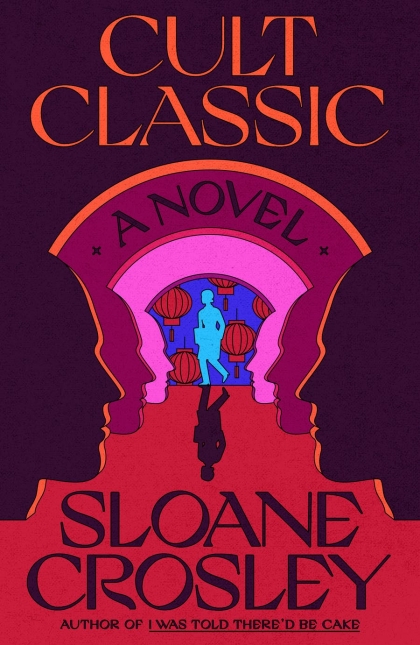 Author Sloane Crosley is probably most known for her bestselling humorous essay collections I Was Told There’d Be Cake and Look Alive Out There. She now brings that signature wit to her second novel, Cult Classic, a sci-fi-esque romcom that explores one woman’s attachment to past relationships as she contemplates the value of a present one.

Lola is the narrator at the center of the story. She’s a newly engaged New Yorker in her late 30s who is delightfully (and maddeningly) sassy and smart. Her sharp, hilarious perspective is the key strength of this 21st-century look at love.

The novel opens with Lola attending a dinner in Chinatown with several ex-colleagues, all of whom worked for the now-defunct journal Modern Psychology. The group includes Lola’s former editor, Clive, and her close friend/ex-coworker, Vadis. When Lola takes a break from the party and wanders across the street to buy cigarettes, she bumps into an old boyfriend. The following day, while meeting someone at the same restaurant, she runs into another ex. And then another.

Lola soon learns that what started out feeling like odd coincidences may not be. It turns out Clive is behind these reveals of Boyfriends Past. Since the journal closed, he’s become the wealthy leader of a New Age, cult-like startup called Golconda. And Vadis? She’s his disciple.

The encounters force Lola to come face-to-face with former flames in rapid succession and raise uneasy questions about her current relationship with fiancé Boots, an artist. When we meet him, he seems perfectly content with Lola and has no desire to learn about her past. For her part, Lola is fine with this:

“Even if I did want to up and leave Boots, dating was not a taste I’d acquired. The older a woman got, the more diligent she had to become about not burdening men with the gory details of her past, lest she scare them off. That was the name of the game: Don’t Scare the Men.”

But when Boots leaves on a two-week trip to San Francisco, Lola suddenly has plenty of time to contemplate her bond with him — courtesy of Clive’s microscope. Unwittingly, she becomes the focus of a psychological experiment that threatens to unravel her understanding of her role in past breakups:

“My whole life, I’d been telling myself the story of every breakup so that I had more agency in it. Men do not like to entertain the idea that they have destroyed someone and so they tend to behave as if they haven’t. I granted them the delusion, forking it over without a fuss. Everyone wins.”

It’s here that Crosley’s book, initially presented as a smart, acerbic take on contemporary dating and mating, morphs into something far more nuanced. The author makes Lola’s experience wholly real and relatable but also unique. Throughout, the reader watches a woman evolve from somebody who believes she has a firm grasp on who she is into one who questions her own sanity.

Lola may have placed her past in a (literal) box, but when she’s confronted with it all over again (and again and again), she begins to examine her choices — including her decision to spend the rest of her life with Boots. Crosley perfectly illustrates the confusion and panic that come with making that momentous choice, while also commenting on the dubious value of today’s pervasive wellness culture.

I see Cult Classic as being in conversation with other works that blend humor and romance with light science fiction, such as the film “Eternal Sunshine of the Spotless Mind.” Readers who gravitate toward witty, unconventional love stories will enjoy it very much. I certainly did.

Sarahlyn Bruck is a community college writing professor and the award-winning author of two contemporary novels, Designer You and Daytime Drama. She lives in Philadelphia with her family.

The Girls from Corona del Mar