As Good as Dead: A Novel 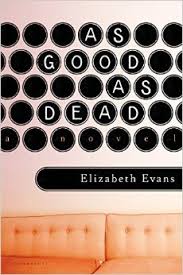 The setting for Elizabeth Evans’ novel As Good as Dead is an attractive hook for lovers of books and writing. It alternates between the Iowa Writers’ Workshop in 1988 and the University of Arizona, where, 20 years later, protagonist Charlotte Price is an accomplished writer and creative-writing teacher.

If that’s not enticing enough, consider that Charlotte’s profile reads a lot like Evans’ own. Evans attended the Iowa Writers' Workshop, earned a master’s degree in fine arts, and is professor emeritus for the Creative Writing Program at the University of Arizona. As Good as Dead is fiction, albeit in a setting the author knows well.

This is Evans’ fourth novel (she has also written a novella and short stories) and, through Charlotte, she continues to explore themes of love, deception, forgiveness, addiction, responsibility, and secrecy in a clearheaded manner, as she did in Carter Clay. Evans provides context and explanation, but never excuses, for what the characters do to themselves and to others.

Charlotte tells her students to give their stories a grounding in the world. Without that, she warns, there is no possibility of consequences. It’s a prescient moment for the reader, because this is a novel fraught with the fallout of Charlotte’s past actions. It is a compelling story, told with delicacy and compassion and with a message: Living in the world means owning the consequences of one’s acts.

At the Iowa workshop, Charlotte meets Esmé Cole, and the two accidentally become roommates. Charlotte is drawn to the vivacious Esmé, who is everything Charlotte is not: outgoing, flirtatious, manipulative.

It’s not surprising that the insecure Charlotte, younger than the other workshop participants and scarred by her mother’s depression, has difficulty navigating the psychological labyrinth of aggressive, aspiring writers.

Charlotte says, “the Workshop was famous...for its cutthroat atmosphere (backstabbing, ass-kicking, brownnosing were just a few of the adjectives regularly lofted in the hallways, at parties, over after-workshop pitchers of beer).” In this atmosphere, Charlotte’s character is both credible and likable despite her mistakes.

When the novel opens, Charlotte has not seen Esmé for two decades, but her workshop roommate has haunted her thoughts. Those memories, laden with nostalgia but also remorse, materialize when Esmé surprises Charlotte with a “fateful” visit. We quickly learn Charlotte had a drunken romp with Esmé’s boyfriend (now husband) at the workshop and that she has kept it a secret.

Evans shifts the setting in time from Tucson to Iowa and back again, skillfully building tension by the juxtaposition of past and present. Student days in scruffy apartments with mismatched furnishings and nights of boozy parties give way to settled, married life in Tucson for Charlotte and her husband, Will, an art historian at the university. Charlotte’s student apartment in Iowa is replaced by their modest home with wingback chairs by the fireplace and a ramada and oleanders outside, but a menacing undercurrent runs beneath the placid surface.

The characters are finely drawn, fleshed out with all the ambitions and doubts, virtues and faults being human implies. Details are sparingly revealed. Evans allows the characters to grow or diminish in our estimation as we see each from different perspectives: friend, lover, spouse; promising, successful, failed; innocent, deceitful, contrite.

Charlotte’s growing self-awareness drives the plot to its resolution. During the workshop, she wrote a story based on her relationship with Esmé. The tale, thinks Charlotte when she discovers a draft in a box of old writings, is a “never finished attempt to understand my friendship with Esmé Cole.”

In hindsight, she comes to terms with her behavior. “Unfortunately, I did not understand that viewing yourself as a victim could make you, poor little you, liable to do damage to others; that victimhood itself was often sustained by self-inflicted wounds.” The reader, who has been in Charlotte’s corner all along, is rewarded with a satisfying ending.

Evans’ light, easy prose is like listening in on a conversation at the next table, where Charlotte is telling her secrets to a friend. Evans’ deft writing makes you want to be that friend.