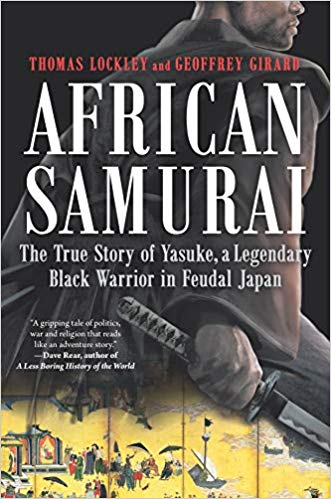 One of the most enduring legends of feudal Japan is the Samurai — warriors of unequaled courage and skill — flashing their swords and leaving carnage as they slash and conquer. These fierce men (and women) spent their lives serving their lords in never-ending warfare. Many readers in the West were introduced to Samurai in James Clavell’s 1975 novel, Shogun, a major bestseller that year.

Sixteenth-century Japan was a time of unending bloodshed, betrayal, and intrigue as various lords formed alliances and counter-alliances, not unlike what was happening in parts of Europe, Southwest Asia, and Africa.

In those years, Europeans were slaughtering the native people of South America and wiping out entire civilizations; the African slave trade was sending black humans to inhuman conditions in the New World; and the Catholic Church was force-feeding itself to millions of heretofore unenlightened heathens around the world.

The Jesuits, with a mandate from Rome and financial support from Portugal, laid claim to much of Asia and set about converting the masses wherever Portuguese trade took them. Into this mix came an African man who had been captured as a child and forced to become a boy warrior in India, and who later found himself as personal guard to a missionary whose mandate from the Vatican was to convert the Japanese.

African Samurai is the true story of the legendary man, who hangs in the minds of the Japanese yet today. The man, who was called Yasuke (pronounced YAS-kay), arrived in Japan in June of 1582 and immediately became a celebrity. Yasuke was in his early 20s and stood well over six feet, more than a foot taller than the average Japanese man of the time. He was well muscled and coal black. He’d been a warrior for most of his life. The Japanese had never seen anyone like him:

“The crowd wanted to see Yasuke. They needed to see Yasuke. And as soon was those on horseback were able to clear a space, the mob filled in behind them, surrounding and cutting off Yasuke and the other seventy porters and attendants who remained unmounted.”

This is how the African was greeted in one commercial city. In today’s world, he would be described as a rock star. The Jesuits knew an opportunity when they saw one, and Yasuke was “given” to Lord Oda Nobunaga, at the time the most powerful man in Japan, who made Yasuke a Samurai and kept him in his personal counsel.

“The Japanese lord snatched up a brush and scrubbed the giant man’s skin himself. Scouring at Yasuke’s exposed arm. Then his back…no matter where he turned, Yasuke’s skin color remained stubbornly the same…The other men in the room burst out with cheers and genuine excitement.”

As with all stories of feudal Japan, this one does not end well. Mass slaughter was the hallmark of the time, and we are left to wonder whatever became of Yasuke.

I couldn’t help but imagine that a movie about the man might be more entertaining than this book. Frankly, not much is known about Yasuke, certainly not enough to fill the 400 pages offered here. His given name is lost to time. Most of the book is a history of 16th-century Japan with cameos from Yasuke and speculation about what he may have thought of any given sunrise or battle.

Still, if you have an interest in Japan, you’ll find plenty to savor. Parts of the book read like a heart-pounding thriller. Author Thomas Lockley, a Brit, is an assistant professor at Nihon University College of Law in Tokyo and has done groundbreaking research into Yasuke. Author Geoffrey Girard is a German-born, American-raised novelist who teaches in Ohio.

I lived in Japan twice and have a fascination with the country’s history and its elegance. Much of that elegance and appreciation of beauty came out of the feudal period, when bloodshed was common. This book offers insights into both. It’s a good summer read if you have a tolerance for swordplay and betrayal.

Larry Matthews is the author of Age in Good Time, Lives and Lessons from Seven Men in Their Seventies.