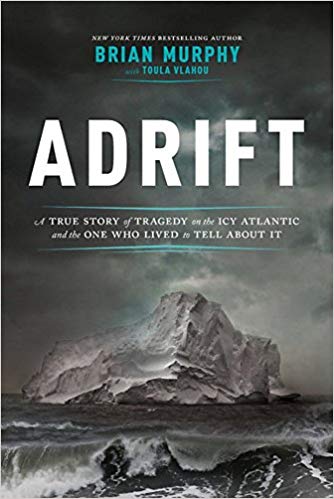 Brian Murphy's Adrift is about a boat and an iceberg. No, not that iceberg, and not that boat.

Instead, this is the story of a three-masted packet ship called the John Rutledge. In 1856, it was headed to New York from Liverpool. When it hit an iceberg, nearly a hundred people died.

One passenger, Thomas W. Nye, of Fairhaven, Massachusetts, lived to tell his story. It's a near-impossibly harrowing one, with depictions of torturous nights in a lifeboat, refugees fleeing starvation, and suspenseful turns throughout.

The disaster Murphy writes about in Adrift is not that well known, which helps make it an apt choice for popular history. The ideas are familiar — perilous crossings, people crowded in steerage — but you truly don't know how it's going to turn out.

The story has some sad sections, and some that are visceral enough to scare, but Murphy's narrative is ever mindful of its place in the past. Sometimes, seafaring stories blur history because of the universality of man versus the ocean.

But Murphy keeps his readers rooted in 1856, before the Civil War, when class distinction decided all aspects of existence, down to the detail of fighting for one’s life in a raft. Closer, then, were ideas of death, of losing loved ones to illness, accidents, and natural disasters.

Parts of the narrative make the reader seasick because they're so gutting, while other passages are pleasantly atmospheric. Murphy’s use of nautical terms and imagery situates readers in the boat with boatswains and horseshoe crabs, longboats and buoys and dock riggers.

And he has a way with sweeping sentences: "Like those in any town along the New England coast, villagers knew what the sea gave as well as what it took," he writes of Centerville, Massachusetts. Or: "Where sea meets ice, the water can shimmer with a pastel palette. As often is in nature, beauty and peril are intertwined."

At 288 pages, Adrift is not a particularly long book; its size is suited to the urgent telling of this forward-moving, wave-after-wave story. There is historical and scientific context on packet ships, the Nye family of New England, and how icebergs calve, but explanations are short, and the action of the book is propulsive. Readers get to know characters through their actions more than their backgrounds or descriptors.

"Shipwrecks are a standard crisis setting," Murphy writes. "First, there are questions about what supplies to bring or leave behind. Then, it gets more interesting because castaways bring unique personalities and inclinations." This is actually what happens in Adrift, which has a standard disaster-chronicle beginning but picks up speed and depth as the narrative moves along.

Murphy employs an unusual technique — of a kind from Erik Larson's The Devil in the White City, in which Larson recreates murder scenes using context from psychological textbooks and contemporary accounts. (Murphy tells readers about his system — and warns them not to "look on the dialogue as verbatim" — in an author's note.)

Using the diction of the day and what he knows of the various figures involved, he imagines conversations, which are differentiated from ones recounted in sources. (The imagined ones have no quotation marks.)

This takes some getting used to, but as the story goes along, one grows accustomed to what is expressed in quotation marks and what Murphy has recreated. It turns out to be an evocative and useful system, bringing scenes — sometimes queasily — alive.

The reproduced conversations echo the overall impression this gripping book leaves; Adrift colors within the lines of narrative nonfiction which place the reader in a time — and in a lifeboat — that could otherwise seem very far away.

Eliza McGraw is the author of Here Comes Exterminator! which is about the 1918 Kentucky Derby winner.

The Ghost Ships of Archangel