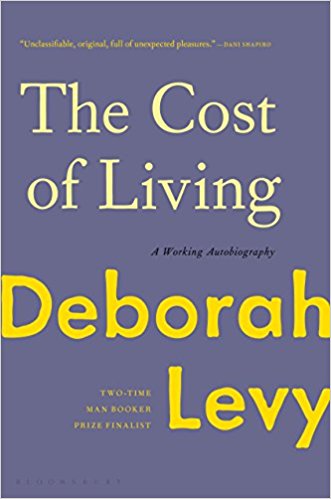 Deborah Levy, a novelist, playwright, poet, and two-time Man Booker finalist, turns her keen gaze inward in her most recent book, a slim and terse volume titled The Cost of Living: A Working Autobiography. Levy begins, “As Orson Welles told us, if we want a happy ending, it depends on where we stop the story,”

Reading like an extended meditative essay rather than a traditional memoir or autobiography, The Cost of Living is about retelling one’s story — and about continuing that story past its expected ending, which, for a woman, is the cliché of being married with children and living happily ever after.

Levy’s book is about that “ever after,” which is not necessarily happy — or at least not happy in the obvious ways. At the age of 50, Levy divorces her husband after 20 years of marriage and forges a new life as a writer, a mother of two teenaged daughters, and a woman who can solve her own plumbing problems and get around London on an electric bicycle.

No triumph is too small to celebrate in her newly forged independence. The point of Levy’s book — indeed, one of its challenges and central conceits — is that the story doesn’t stop.

The word “working” in the subtitle is of huge import, for Levy thinks of her life is a work-in-progress. Thus, there is no perfect place to stop the story, yet a book must end. It is this open-endedness, this refusal to build conclusions, to artificially grasp at larger meanings that are not there (or at least are not yet evident), this refusal to finally declare the happiness (or unhappiness) that might leave some readers dissatisfied. What happens next? they might ask. The point is we don’t know.

In the first chapter, Levy describes an interaction that she witnessed at a Colombian bar between an American in his late 40s and a young British woman. After the woman speaks to the man at great length about her experiences scuba diving in Mexico, his response is, “You talk a lot don’t you?”

Reflecting on this interaction, Levy writes, “It had not occurred to him that she might not consider herself to be the minor character and him the major character. In this sense, she had unsettled a boundary, collapsed a social hierarchy, broken with the usual rituals.” In her book, Levy inhabits herself as the major character, upsetting whatever hierarchies and rituals that might get in her way.

The young Brit, she notes, could have spoken of the wonders that she saw on her scuba-diving adventure. “That would have been a happy ending, but she did not stop there,” Levy writes. Rather, she spoke of an “undisclosed hurt” related to the trip, refusing to shrink from the pain, to sugarcoat her experiences for this older, more experienced man. This, then, is Levy’s intent: to write of her own undisclosed hurt.

As Levy begins her process, she discovers that “To strip the wallpaper of The Family House in which the comfort and happiness of men and children have been the priority is to find behind it an unthanked, unloved, neglected, exhausted woman.”

In other words, she is very much like the thwarted female artist figure that Levy’s countrywoman Virginia Woolf interrogated nearly 90 years earlier in A Room of One’s Own, another slim, meditative, essayistic book. The conflicts, the tensions, the questions remain the same, even if the writers’ circumstances differ. Woolf was married without children; Levy is divorced with children. But both women see that they — and other women artists — have been written into a narrative that they did not choose, and both must work exceptionally hard to escape its constraints.

Levy finds her own flat, creates a new home for her daughters, but she has no place to write. It is Woolf’s central problem all over again: Levy must find a room of her own. She rents a rustic shed in the back of a garden, then she acquires an electric bike for getting around the city.

The space of her own, free of family life, is exceptionally important to Levy’s development as a writer: “I did not know it then, but I would go on to write three books in that shed, including the one you are reading now. It was there that I would begin to write in the first person.”

Levy’s journey toward self-actualization is a serious one, but the book is not without its humorous moments. In one scene, Levy is riding her electric bike up the hill toward her flat in the pouring rain when her bag breaks open and out spill the contents, including a raw chicken that she was bringing home to cook for dinner for her younger daughter:

“The traffic had to stop while I looked for the chicken,” Levy writes. “It was lying like roadkill near the wheels of the car that had run it over, flattened but intact, its skin imprinted with the marks of the tyre.”

Nonplussed, Levy nonetheless retrieves the bird and cooks it. Even as she seeks a new narrative for herself, she recognizes that she cannot escape the old one, grounded in domesticity and motherhood, and she accepts that some of the storylines from her old life must continue.

Within a year of her divorce, Levy must face another milestone of middle age: her mother’s terminal illness and eventual death. In the most eloquent and deeply felt passages of the entire book, Levy writes of the hole that this loss opens in her life.

She also speaks articulately about her conflicted feelings for her mother. On the one hand, she had, as a teenager, found fault with her mother for her introspection, her private internal life. “What do we need dreamy mothers for?” she writes. “We do not want mothers who gaze beyond us, longing to be elsewhere. We need her to be of this world, lively, capable, entirely present to our needs.”

But if she is that person — the selfless mother — we find fault with her for having nothing of her own. Levy writes, “Did I mock the dreamer in my mother and then insult her for having no dreams?” These reflections are doubly meaningful as Levy herself is struggling to be both mother and dreamer.

But these contradictions are paled beside the raw grief that envelops Levy in the aftermath of losing her mother. “Sorrow does not have a century,” she writes, addressing her mother directly:

“I began to wonder for the first time how it was that Shakespeare’s pen had moved the lips of Hamlet to open and close and open again to speak the struggling words that so accurately described the way my mind could not accept your death. And then I read that he wrote Hamlet in the year his father died.”

While she is forthcoming about her grief over her mother’s death, Levy is reserved about her divorce — not just about the details of her failed marriage, but about its emotional weight. It’s as though she is holding something back from the reader, from herself, or perhaps both. Many times she turns to making observations of other people — often strangers in public — rather than scrutinize herself.

Perhaps these allegories speak to her experience, but they also serve to keep a distance from her own story. As much as Levy says she wants to tell a new story, an untold story, often she is unable to do so, except obliquely. This sometimes makes for a cryptic read, demanding that the reader be willing to decipher connections and infer what has been left unsaid.

At times, Levy leaves out as much as she tells us, coming across as someone who is not at peace with the tortuous course her life has taken. But how many of us are? As her subtitle tells us, this is a working autobiography, a work in progress.

As she writes toward the end, Levy is not interested in “the major female character that has always been written” but rather in “a major unwritten female character.” And, here, Levy has taken the first steps to creating that character, leaving it to others to develop her more fully.