A Union Like Ours: The Love Story of F.O. Matthiessen and Russell Cheney 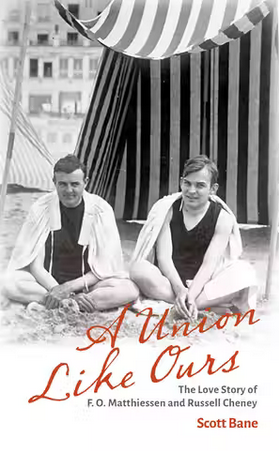 What’s more interesting than a literary biography that provides fresh historical and cultural insight? Scott Bane, a program officer at the John A. Hartford Foundation, delivers both in his debut book, A Union Like Ours: The Love Story of F.O. Matthiessen and Russell Cheney.

A Union Like Ours explores the relationship between Cheney (1881-1945), an American painter, and professor and literary critic Francis Otto Matthiessen (1902-1950). Theirs was as close to a marriage between men as society would then permit. Bane unspools their romance against their intellectual and artistic development. Along the way, he takes readers on a journey through art history, literary criticism, economics, and the impacts of class and politics on their lives.

(I met Bane close to 30 years ago when we were engaged in joint work against the American death penalty. We lost touch, and I was delighted to learn of his recent incarnation as an author.)

Cheney and Matthiessen came from great privilege. Cheney grew up in South Manchester, Connecticut, 10 miles from Hartford, where Cheney Brothers Silk Manufacturing Company was prominent. Between the Civil War and the Depression, the company grew into a behemoth, with a strong commitment to employing and supporting the local community.

Matthiessen was born in Pasadena, California, the youngest of four siblings. His father was heir to the Westclox (alarm clock) fortune, and his mother was likely a distant relative — and closely involved with — the family of Sarah Orne Jewett, a well-known Maine novelist and poet. Matthiessen’s parents divorced early in his life, unusual for the time. His childhood was disrupted by his mother’s frequent moves. Ultimately, she settled them in Tarrytown, New York, where she placed him in a Unitarian boarding school for boys, the Hackley School.

Bane’s coverage of the two men’s lives before they met is nuanced and intelligent. Psychological and historical details create meaningful context for their later time together. Cheney was the youngest in a tightknit family of 11 children. His artistic interests were encouraged. He attended Yale and was inducted into Skull and Bones, a secret society with great social prominence.

After college, Cheney traveled extensively but was waylaid by tuberculosis, which had already taken two of his siblings and endangered the life of a third. He used his time in the elegant Cragmor Sanitorium in Colorado Springs to deepen his aesthetic education. His artistic breakthrough came in 1917, at age 35, when he had an exhibition at the Wadsworth Atheneum Museum in Hartford.

Matthiessen’s life — roughly spanning the first half of the 20th century — took place during a time that began with more permeable lines between homosexual and heterosexual relationships which then became less and less tolerant. Like Cheney, Matthiessen went to Yale and was inducted into Skull and Bones. He was an excellent student, winning a Rhodes scholarship upon graduation. Although he fit the predominant mold for Yale at the time — white, upper class, Protestant — his growing awareness of his homosexuality opened his mind. While at Yale, he moved left politically, initiating a lifelong passion for the labor movement.

Matthiessen and Cheney met aboard the Paris, an ocean liner bound for Europe, in September 1924. Cheney was in his early 40s and headed to Venice and Florence to seek painting inspiration. Matthiessen was returning to his second year at Oxford.

With access to multiple archives and to relatives of the two men, Bane has clearly done his homework. (The book includes comprehensive endnotes as well.) Among other things, the author chronicles Cheney and Matthiessen’s growing bond with nuance. Over the course of the voyage, Matthiessen began speaking to Cheney candidly about sex. Offering a pear to Cheney in his room, Matthiessen said that, at the Hackley School, “I was sexually inverted. Of course, I’ve controlled it since.”

“The munching of the pear died away. There was perhaps half a minute of the most heavily freighted silence I have ever felt.” Then came Cheney’s response, “My God, feller, you’ve turned me upside down. I’m that way too.”

As their relationship blossomed, Matthiessen’s love was “modern” in the sense of romantic love, and it “became a critical factor around which he organized his sense of himself and the world.” Cheney felt otherwise, finding sex “a much smaller thing than that.” Bane posits that, as the older of the two, Cheney was more aware of the risks of the criminal charges that could come from their behavior:

“For all Matthiessen’s and Cheney’s compatibility, Cheney’s worldliness and conservatism stood in sharp contrast to Matthiessen’s inexperience and idealism.”

Nevertheless, the men carved out a rich life for themselves. They traveled considerably, often apart. They bought property together in Kittery, Maine, which served as their homebase. Matthiessen’s career took off, first as a professor at Yale and then at Harvard, where he became an eminent literary critic in part by focusing on then-lesser-known figures (many of whom were contemporaries) like T.S. Eliot, the James family (including Henry James), Sarah Orne Jewett, Sinclair Lewis, and Herman Melville. He published his best-known work, American Renaissance: Art and Expression in the Age of Emerson and Whitman, in 1941. Cheney, an impressionist painter, produced an enormous volume of work, including portraits and landscapes.

As Matthiessen’s star rose, he became Cheney’s chief financial support. Cheney became increasing bedeviled by his complex, enmeshed family relationships and by alcoholism. Toward the end of his life, he engaged in a series of frustrating cycles of alcoholic blackouts followed by time in elegant rehabilitation centers. His health steadily deteriorated, and he died in 1945.

Matthiessen, grief-stricken, grew more open about his leftist politics. He was embroiled in a series of scandals that misrepresented his writing and speaking, and he was targeted by the FBI for such activities as participating on a panel with the eminent Black intellectual W.E.B. DuBois. He was also named by Joseph Matthews, former research director of the House Un-American Activities Committee, as being an active supporter of Communist organizations in Massachusetts. Matthiessen began to complain to friends of exhaustion and depression; he committed suicide by jumping out a window in Boston in 1950.

It is a complicated task to weave together two lives. Cheney and Matthiessen had different career trajectories, and due to their generational gap, lived in separate time periods. So, particularly impressive in Bane’s work is the thorough, 360-degree view he gives to his subjects’ lives. The author’s empathy must derive in part from the poignant personal background he provides; he and his own husband met dire health challenges sequentially over the last two decades.

A Union Like Ours is an absorbing read and a significant addition to America’s sociological and intellectual history.

Martha Anne Toll won the 2020 Petrichor Prize for Finely Crafted Fiction, and her novel, Three Muses, is forthcoming from Regal House Press (fall 2022). She is a frequent contributor to NPR Books, the Millions, the Washington Post, and other outlets. For her fiction and nonfiction, please visit her website, and tweet to her at @marthaannetoll.