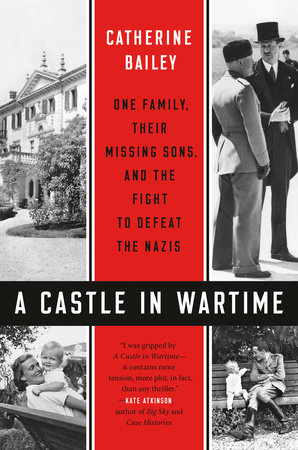 A Castle in Wartime delivers a suspenseful, emotionally gripping, and fact-based chronicle of one young mother’s plight under the Nazis in the waning months of World War II. But what takes place at the macro level is what makes this book a distinctive, uplifting read.

Here, it reveals a great deal about the sporadic opposition among Germans of privilege and pedigree to Nazi rule, and about the Reich’s oddly ambivalent response as it sputters toward defeat on the battlefield.

In an impressive display of narrative reach and research, author Catherine Bailey skillfully elucidates the grand historical circumstances unfolding beneath the close-up family saga she recounts. Her broad-gauge exposition throws the interpersonal drama at the book’s core into moving, sometimes shocking focus.

At the center is the story of 25-year-old Fey von Hassell, mother of two, a well-born German married to a landed Italian aristocrat. Their estate, replete with a ruined castle and its own mini village of tenant farmers, lies some 60 miles northeast of Venice, close to the Yugoslav border.

As the war in Italy begins to shift in the Allies’ favor, the German military descends, forcibly separating Fey from her sons and taking her into detention. Author Bailey follows Fey’s misfortunes over the next months as she and a troupe of fellow captives are sporadically moved about by train, bus, and wagon, always under guard, although mostly in relative comfort.

So why are Fey and her companions, many of them extended family groups with children, being held? And why ⸺ with such uncharacteristic respect for “guests” ⸺ is the SS holding them in kid-gloves captivity? It soon becomes clear, at least in the twisted reasoning of their captors: Members of their wider families have allegedly participated in one of the periodic failed assassination plots mounted against the Führer.

The Reich’s national police chief, Heinrich Himmler, has interned the group with no evidence of their involvement in these plots, reviving the medieval concept of “blood guilt.” Fey unwittingly qualifies under this pretext because her father, Ulrich von Hassell, a notable government official and longtime German ambassador to Italy, has been implicated in one such scheme.

At the same time, Himmler has his own reasons for keeping the captives alive. He sees them, aristocrats all, as potential bargaining chips during the inevitable runup to Germany’s surrender.

Among the captives are many members of the von Stauffenberg clan. Claus von Stauffenberg was a lead conspirator in the famous Valkyrie plot to kill Hitler and was executed for his role. Among the Stauffenbergs in Fey’s group is Claus’ younger brother, the charming, erudite Alex.

A key source for this book is Fey’s diary. (It’s unclear to this reader when these memoirs were composed.) Here’s what the entries have to say about Alex: “In the unreal and difficult circumstances in which we found ourselves, I had fallen in love with him. I sensed he felt the same…”

In Fey’s (and Bailey’s) retelling, a passionately chaste affair ensues, all four feet on the floor, only to be curtailed by the death of Alex’s brilliant test-pilot wife, a Nazi favorite, in a fiery crash. Although this latter complication is historically accurate, in the retelling, it echoes pop-romance tropes. For this reviewer, the brief love-affair sequence is a speed bump.

But what is a mark of distinction is the author’s ability to zoom back from her core domestic drama to depict the steal-your-breath settings, including death camps and alpine hostelries. Not to mention the political and military events marking the waning years of the war, notably in northern Italy, Eastern Europe, and Germany itself.

She does this repeatedly and vividly, testimony to her extraordinary skill at framing a small story in the far more vibrant context of history on the march.

The Bitch Is Back: Older, Wiser, and (Getting) Happier

A new collection of essays revisits the burdens of motherhood, marriage, and autonomy first laid out in The Bitch in the House.