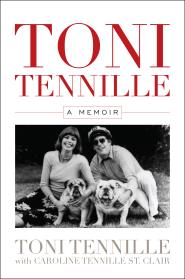 Toni Tennille’s life has been fraught with emotional fraud.

Love was supposed to have kept the Captain and Tennille together — at least according to their popular 1975 song, but her memoir, Toni Tennille, written with her niece Caroline Tennille St. Clair, divulges a different, darker tale.

Toni Tennille was raised in the segregated South of 1940s Montgomery, Alabama. In that decade just before the emergence of Civil Rights, everything — from a child’s view — looked more right than wrong: the grand houses, the precisely planted properties, the hallowed housekeepers, and the buxom black cooks with deep, rich voices that spoke in polite propriety.

Tennille loved her mother, but she idealized her father, Frank — a former Big Band and solo-act singer who taught her everything he knew about music. But appearances often amount to false impressions. Just beneath the pomade and polish, latex and lipstick, there was trouble.

“Daddy’s abuse of alcohol created a dark side to his normally sunny disposition,” Tennille writes. “He would go weeks without a drink only to fall into the trap of ‘just one,’ which would lead him into the depths of another horrible binge period…Addiction was something to be ashamed of and hidden away; when it couldn’t be concealed, it became fodder for gossip among friends and family.”

By the early 1960s, changing tastes and times, poor business decisions, and the irrational behavior that comes from unabated drinking compelled Frank Tennille to shut down his family’s century-old furniture store, declare bankruptcy, and relocate to Southern California. Cathryn, his wife, abandoned her popular radio-interview show — “The Guest Room” — during a time in which only one other woman was broadcasting on the Alabama airwaves. Tennille quit Auburn University and her regular gig as chanteuse of the school’s traveling orchestra.

A relative arranged employment for Frank at Northern American Aviation in Los Angeles and, in Newport Beach, the family quickly settled into a Spanish-style house a few blocks from a shoreline of boys and boats. Not long afterward, Tennille hastily married a drummer, Ken, with whom she had little in common. He enlisted in the Army, and they moved to Georgia; she was bored and funds were meager. “Money was so tight that our idea of a party was when we provided the Kool-Aid mix and our guests brought the sugar.”

Upon her husband’s discharge, they formed a musical group and “played…all over the country, which sounds really exciting but was anything but. We drove from state to state, in one car with all our instruments and luggage crammed in the back, and performed at hotel lounges and small clubs. The worst part for me was the cigarette smoke that billowed as thick as Newport Bay fog in every place we played.”

When they returned to California, Tennille separated from her husband, acted in a community theater production of “Picnic” with her mother, and co-wrote some of the songs for an ecologically themed musical revue called “Mother Earth” at the South Coast Repertory Theater.

“On opening night Hollywood Reporter, The LA Times, Variety and the Orange County Register all came to review it…After word got around…Hollywood producers began to come…from Los Angeles to check it out. One producer, Ray Golden…said he would take Mother Earth all the way to Broadway! He quickly offered a contract…we signed it, convinced we were on our way to the big time. We should have known better.”

In the middle of its San Francisco run, the keyboardist dropped out and was replaced by a musician on break from a Beach Boys tour: “I immediately knew he was perfect for the show…When he finished and looked up at where I stood next to him, our eyes met. I felt my heart tighten and pound like a fist beneath my breast.”

His name was Daryl Dragon.

After several Beach Boys junkets, the duo got work at various California clubs. Eventually, a DJ encouraged them to record a demo of Bruce Johnston’s “Disney Girls” but, ironically, the B‑side of the single, Tennille’s “The Way I want to Touch You,” was the surprise hit.

Momentum from that song birthed “the Captain” — a stage name in homage to the Beach Boys’ Mike Love, who admired Dragon’s captain hats and skill — “and Tennille,” whose successes included a number-one debut single, “Love Will Keep Us Together,” and follow-up triumphs “Shop Around,” “Muskrat Love,” “Lonely Night (Angel Face),” and “You Never Done It Like That.”

With considerable pressure from A&M Records to keep sales vigorous and their image pristine, the label falsely announced the couple’s marriage on Valentine’s Day 1975. Tennille and Dragon weren’t even engaged but, to satisfy this new “expectation,” they had a Veteran’s Day wedding ceremony in Virginia City, Nevada, before a justice of the peace and two strangers who were barely sober.

“After our somewhat odd but entirely legal wedding ceremony, I didn’t feel any closer to my new husband than I had before. I wonder how many other new brides…felt the same way as they waited for the romantic fairy tale, which had been promised to us since girlhood, to start.”

The couple had great musical chemistry and even segued into television with their own show and an audience of 30 million. But their personal life — the 39 years together — was loveless. They had separate bedrooms, independent interests, and ineffective communication.

By 2014, after having lived in Nevada and Arizona, the couple’s career was slowing, their house was too expensive, and their finances were deteriorating. They built a smaller place in Prescott, Arkansas. One night, Dragon insisted they buy a $10,000 generator and placed the order. Tennille objected to the cost, and he got verbally abusive.

“Daryl and I had our differences for many years, but he had never cursed at me with such rage. Perhaps he had his own reasons to be angry, reasons I could never understand even though I had tried repeatedly. Maybe I had unwittingly done something to evoke this vitriolic response. But at that moment I knew…I had no choice but to leave.”

Some legends claim dragons are fiery, loyal, passionate, and generous, but they never hurt anyone. In this very sad story, the complicated “dragon” couldn’t receive his wife’s love.

David Bruce Smith is the author of 11 books and founder of the Grateful American Foundation, which is restoring enthusiasm about American history for kids — and adults — through videos, podcasts, and interactive activities, and the Grateful American™ Book Prize for excellence in children’s historical fiction and nonfiction focused on the United States since the country’s founding.

The News: A User’s Manual

A thought-provoking look at how today’s news stokes our fears and exploits our weak hold on a sense of perspective.