The Virtues of Weil

A look at several new or forthcoming books on the late French philosopher & mystic. 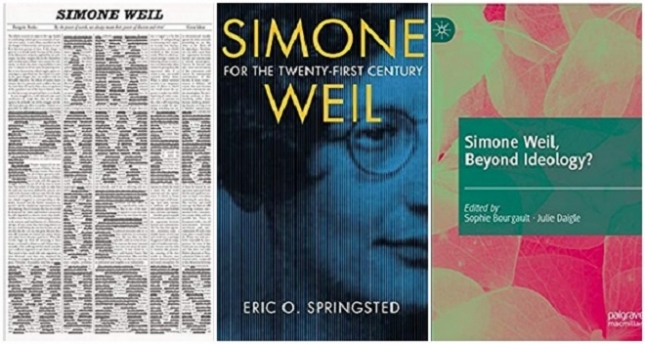 The world has yet to become weary of Simone Weil (1909-1943). There is an annual outpouring of books, articles, and conferences on this French woman who never wrote a book but whose literary output (essays, reports, letters, lectures, and diaries) was voluminous. All her writings were collected by others and published posthumously in French, English, Italian, German, Spanish, and Chinese, among other languages.

In 2020-21 alone, there is a new biography by Robert Zaretsky, The Subversive Simone Weil: A Life in Five Ideas; an analysis of her philosophical and religious thought by Eric Springsted, Simone Weil for the Twenty-First Century; and a collection of new commentaries edited by Sophie Bourgault and Julie Daigle, Simone Weil, Beyond Ideology? Plus, reports are that the NYRB imprint has a new translation by Tess Lewis of The Need for Roots in the works. And then there is Simone Weil: The Power of Words, just released in the U.K.

Why all this interest? How does one explain the preoccupation with this woman, this philosopher, teacher, playwright, activist, farm and factory worker, and mystic? Perhaps it’s just that rare profile of a person. Then again, maybe it’s the wide swath of topics she wrote about with such insight — from mathematics to physics, from Marxism to Platonism, from political philosophy to spiritualism, from Greek tragedy to Hindu scripture, and from pedagogy to prayer.

Or was it her outsider status — e.g., she first rejected Judaism and later shunned baptism — or because of how she died (starvation as an act of protest, so it is said)?

There is also the way Weil wrote, the power of her own words. Perhaps the best description of her writing was gracefully articulated in a 1975 essay by the late Elizabeth Hardwick in the first issue of Signs:

“The language of Simone Weil — be prepared for a passionate style. Certain words, simple enough in themselves, are used over and over in a peculiarly lyrical manner and with a beautiful expressiveness beyond paraphrase. Obsessive longings combine with a profound acquaintance with history as social fact, and history as the record of the spirit of man. The intention is always to extract the pure from the degradations and deformations of history, to experience the lone soul in the midst of the state, the empire, the factory.”

Notably, the attraction to Weil and her writings is owing to all of the above and more: that humanist part of her, that streak of genius, that rebellious side, that existential-like part, and that transcendent quality. Put them all together and you have Simone Weil.

Tag her the “Socrates of Modernity,” or the “Saint of the Absurd,” or whatever. Some revere her, some dismiss her, and some pick and choose whatever aspect of her thought suits them, but countless readers continue to ponder her words.

The latest publication of Weil’s works, The Power of Words, contains a pithy biography and introduction: “Simone Weil, 1909-1943.” That’s it! Thereafter, the reader of this skinny and modestly priced paperback is on her own if she wishes to link the life and legacy of Weil to the three pieces contained in the book:

The three pieces were excerpted from Simone Weil: An Anthology, edited by Siân Miles, and all of them can be accessed in toto and for free here.

Words were important to Weil. How to read them, write them, understand them, meditate on them, judge them, and how not to be duped by them. All such concerns were central to her philosophy, both political and spiritual. Not surprisingly, her “Power of Words” essay (first titled “For the Sake of a Bit of Clarity”) has become one of the mainstays of her thought.

Weil’s argument: Words are not talismanic. True, they can help us navigate reality but not conquer it. To be effective, they must find some link to the real world; otherwise, they trade in illusion and tyranny. When, for example, the language and logic of science surrender to the political propaganda of the day, words stupefy people in perilous ways. A herd mentality cannot produce herd immunity from life’s dangers; it can only produce an orthodoxy of idiocy.

Weil’s words: “Common to all our most threatening troubles is one characteristic which might appear reassuring to a superficial eye, but which is in reality the great danger: they are conflicts with no definable objective.” Where the language link is broken, where there is no true objective, there is no limit to the evil that meaningless ist (“fascist”) or ism (“communism”) words can cause.

The same holds true for slogans cast in capital letters (“MAGA”). Without thought, men surrender their lives and women their minds in the service of what Weil termed “lethal absurdities.” There is no measure, no proportion, not limit in such language; there are no qualifiers such as, “they are fascists to the extent that…” There are only murderous abstractions.

The bridge between Weil’s 1937 “The Power of Words” essay and her 1943 “Human Personality” essay is well constructed by way of the following passage: “There is a seduction in whatever [causes] us to forget the reality of the obstacles” that confront us. Intoxicating words serve that deceptive purpose. They encourage war, rationalize slavery, excuse brutality, equate fact with fiction, and justify the exploitation of the vulnerable.

They also render us oblivious to the cries of those harmed, those whom “in the teeth of all crimes committed, suffered, and witnessed, [yearn] that good and not evil will be done” to them. Yet our system of “public freedom of expression” is not designed to hear their cries if only because it presupposes that the powerless can speak and that the powerful have the will to hear them.

Neither, of course, is true. In the vociferous clamor, there is no “attentive silence” to hear the cries of those afflicted with suffering and despair.

In her “Personality” essay and the 1943 “The Needs of the Soul” excerpt, Weil’s political philosophy is infused with a spirituality at once magnificent and mystifying. In a world where rights are fiercely pitted against one another with breathtaking imperiousness and hypocrisy, “What is sacred in every being” (that longing for the good) is bum-rushed out the doors of awareness.

The Western world’s fixation with rights, Weil argued, makes us oblivious to those obligations owed to every human being. By such Hobbesian measures, everyone battles for their rights no matter how detrimental to the public interest. When one considers how partisan strife has corrupted the latter, it is no surprise that the very idea of humanity has succumbed to robotic party loyalty of the worst kind. Mean-spiritedness is now applauded with fanatical approval.

There is, of course, more to be said about the three luminous works collected under the title The Power of Words. For one thing, there is the remarkable, yet tragic, life story behind the words. And then there is the story of a young woman who, in her final years, battled “against the limitations of language” as she tried to express that transcendent something burning within her. To read Simone Weil (for all her faults) is to be moved in ways that first open the mind and then touch the soul.

Ronald K.L. Collins is a retired law professor and the co-director of the History Book Festival. His writings on Weil have appeared in the journal Cahiers Simone Weil, in the book Simone Weil’s Philosophy of Culture (Cambridge University Press, 1993), and, more recently, in the Independent and in the Los Angeles Review of Books.