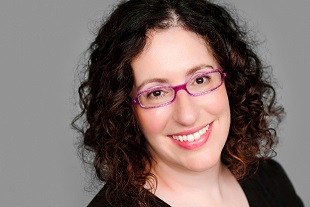 With her previous novels Still Life with Husband and Friends Like Us, Lauren Fox has earned a reputation for deft comic prose and compassionate insight into marriage and friendship. In Days of Awe, the central character, Isabel Moore, lives and relives the year her best friend died suddenly, her husband left her, and her affectionate daughter morphed into an angry, troubled ‘tween.

The term “Days of Awe” is most familiar as a reference to a Jewish observance, the 10 “high holy days” between Rosh Hashanah and Yom Kippur, but that’s not what’s happening in your book. What’s the connection?

In its very earliest stages, the title was one of the first things I knew about this book — that I would call it Days of Awe, and that it would be both a direct and an indirect reference to the days between Rosh Hashanah and Yom Kippur. There is a direct reference in the book, when Isabel goes over to Mark's house to help him move out. It's briefly defined (as 10 days of introspection and repentance), and then Isabel and Mark quickly undermine this fact by being irreverent.

So that's part of it: Isabel's vexed relationship with Jewishness runs through the book, particularly in relation to her mother. But I also imagined a faceted meaning to the title, the idea that there are times in our lives when we are both steeped in and slightly removed from the depth of our emotions. Isabel is grieving her friend and other parts of her life that have fallen away, but she also has moments of grace, of awe, of appreciating the small and remarkable people and things that she still has: her daughter, her mother, her frayed capacity to connect with other people.

Isabel has a horrible year, but, as you reveal layers of her, it’s clear she already had inside her a deep well of grief, one caused not only by multiple miscarriages, but also by her mother’s dismissal of any of her difficulties as not being as bad as the Holocaust. While that’s obviously true, it seems to distort the relationship between mother and daughter. Is this a dynamic you’ve seen in real life? How did you decide that the character Helene, Isabel’s mother, would be someone who narrowly escaped the Holocaust but refuses to talk about it?

It's always so interesting to me to find out how people interpret my books in ways that are different from what I intended (either consciously or unconsciously). I think this is why they say never trust the author! I never thought of Isabel's grief as being caused by her mother's dismissal of her difficulties, but more that Helene's experience as a German Jew so deeply informs her worldview, and that that's part of her legacy. She's passing to Isabel the pain of the world in a way (and none of our difficulties stack up to that!). I don't think it distorts the relationship between mother and daughter so much as it sheds an unusual light on their relationships to the world, to their own pain.

I think it's pretty common for people who have experienced trauma to refuse to talk about it, or to skirt the issue in complicated ways, and I've always been interested in the legacy of trauma, the inheritance of it. I think there are deep psychological undercurrents of loss that come from not knowing the whole story, but always feeling it, knowing it subjectively, intuitively.

What was the original kernel of the story, and how did you build on it? Are you a writer who outlines your novel, or do you start with a character, or one scene, and write from there?

When I was first dreaming up this novel, I had occasion to notice that there is no road map, in our culture, for mourning a friend. I think there are lots of rules for grieving the people we are bound to by blood or marriage, and those rules can be comforting. But mourning a friend seems like uncharted territory, a kind of grief we are not expected to feel too deeply or too messily. So that was what sparked the novel for me, and from there, yes, I drew up a very specific outline. I outline all of my novels pretty rigorously, because I need the security of knowing where my plot is heading...but then, having the outline allows me to break free of it.

Isabel is a teacher in a middle school, and your passages about chaperoning school trips, the atmosphere in the teachers’ lounge, and, yes, the backbiting and sabotage ring perfectly true, but I don’t see in your bio where you are (or have ever been) a teacher. Were you, or are you?

I've never been a teacher, but I've always loved workplaces in which people are very emotionally invested, so that they become like surrogate families, with all the good and bad that entails. Like most people, I've worked in environments where everybody knows too much about one another. I love the idea of communities where the bonds we create are so complicated and juicy.

Although your book deals with heartbreak, humor always bubbles up. When Isabel’s friend Josie is taking antidepressants with their made-up-by-marketing names, the two of them start making up their own: “I forgot to take my Gladiprene. I’m way too cheerful right now! I need to up my dose of Despairizeme! Despondizac! Hopelesse!” Are you someone who sees humor where others do not?

I would say that the people who are close to me would roll their eyes at that question and agree that I do see humor where others do not, and often where others should not. I don't know, though — I think most things are pretty dark and funny with a little bit of time and distance behind them. Comedy is tragedy plus time, right?

State secret. If I tell you, I'll have to kill you. In fact, I'm working on the next book, but I've learned the hard way that if I talk about a project too soon, while it's still germinating, that somehow manages to ruin it. So I'll just say that, like my previous novels, there will be lots of car chases, several robot overlords, and at least three zombie apocalypses.

An Interview with Rana Awdish

The physician/writer's own brush with death opened her eyes to patients' plights.