The Protestant Cemetery of Rome

Keats and Shelley and "Don’t Miss a Beat." 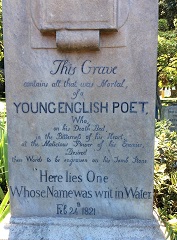 ROME. Most everyone arrives at this famous boneyard in the Testaccio neighborhood as I did this month: in search of two long-dead Brits from the early 19th century, alleged pals of the Romantic quill who apparently were not as fond as one another as we thought.

In the shadow of the 2,030-year-old Pyramid of Cestius, below the root-knotted ground with John Keats and Percy Bysshe Shelley, I discovered an American poet as cool as a ’59 Star Chief.

The cemetery gates open off of Via Caio Cestio, no charge for admission. Keats is easily found: to the left as far as you can go before hitting the wall that surrounds the cemetery, which opened in 1716, three years before the publication of Robinson Crusoe.

A frieze of Keats’ face — forever young, dead at 25 from tuberculosis — is on the wall, a place to sit nearby and a few feet in front of the bench, his tombstone with the passive/aggressive inscription: “Here lies one whose name was writ in water.”

I took some notes — a small sign near Keats’ grave declares that it is “severely prohibited” to spread cremation ashes in the graveyard without written permission — and then left a nickel (Jefferson face up, minted in 1988, the year of Raymond Carver’s death) atop the marble slab marking the poet’s grave.

The nickel was all I had on me that represented the United States. I hoped that leaving it on the grave of the man who wrote, “His soul shalt taste the sadness of her might,” might persuade whomever found it that not all Americans are as venal as the past 18 months of malignancy suggest.

Then, I set out to find Mr. Shelley — he of Prometheus Unbound and spouse of the author of The Modern Prometheus. (Herman Munster to you and me.)

Locating Shelley, even with the kindly help of volunteer scholar Nicholas Stanley-Price, took a while. Up by the back wall, by an arch near the middle and, from others winding through the rows, “It’s next to the sleeping angel.”

There are a lot of angels — cherubs, sprites, winged attendants of God, both sleeping and weeping – in any cemetery. This one seemed to have more than its share.

“When you find Shelley,” said Stanley-Price, author of The Non-Catholic Cemetery of Rome, “turn directly around and look down.”

I finally found Shelley (he was up by the back wall, by an arch near the middle, alongside an angel), had no more coins to leave, turned around, looked down, and saw flush with the ground:

Not bad for a Catholic teenage jailbird from the corner of Bleecker and MacDougal, born in the hospital where Dylan Thomas died and buried a nickel’s toss from his heroes.

Rafael Alvarez can be reached via maconstreetbooks.com.