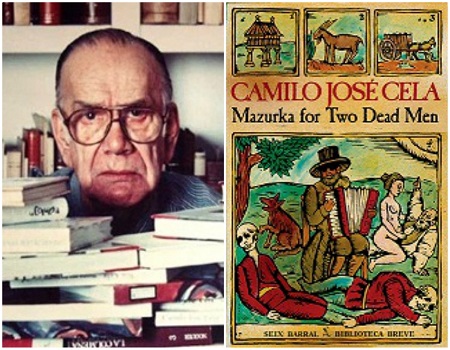 Galicia, Spain. I am winding through Galician villages from the town of O Grove, a centuries-old smuggler’s haven, to the region’s capital — Santiago de Compostela, one of the world’s great pilgrimage sites. And the spot where — though farfetched — many believe the headless body of the Apostle James is buried.

No “camino,” walking stick, and foot blisters for me. I travel by bus.

When I left Baltimore in mid-July this year, I was reading three books at once: Proust’s In the Shadow of Young Girls in Flower, volume two of In Search of Lost Time; The Catalogue of Shipwrecked Books, an account of Columbus’ biblio-obsessed son Hernando; and a casual pass through A Farewell to Arms, which I had not read since high school.

The choice was calculated. Mazurka had remained untouched since I purchased it in 1994, when New Directions brought it out in English.

(A mazurka is a lively polka, a malleable genre that crosses all ethnic boundaries — from Poland to Louisiana to Cleveland and, in this telling, Galicia, the secretive, seventh Celtic nation where the bagpipes are the traditional folk instrument.)

I knew the book detailed the fabulous (and fabulistic) history, quirks, and customs of the rocky Atlantic shoreline I was soon to wander, the land of stone corncribs on stilts where — in the village of San Vincente, Chapela, in 1904 — my namesake grandfather was born.

And I knew that, without the distractions of home, I would digest it whole on long plane, train, and bus rides. Into the suitcase it went. Through its pages and the people I met over the next four weeks, I would learn as much about Cela — and the “nine signs that mark the bastard” — as the place of his birth.

The sister of my dear friend Francisco Cabaleiro — having invited me to lunch at her home in the village of Cabanas in Redondela, Galicia — became very angry when I mentioned Cela’s name over a meal of codfish empanada, salad, and homemade wine.

“He’s a machista,” she said, nearly spitting the synonym for misogynist in front of her grandchildren, “and a fascist Franco snitch.”

No one else with whom I brought up the writer’s name disagreed, though they all said he was a great artist, and many read him in school growing up before the death of Franco the dictator in 1975.

So, the bad man of great talent is on my knee (as so many lustful farm wives and housekeepers sit on the lap of voracious parish priests in Mazurka) as I pass the ancient settlement of his birth, Iria Flavia, in the community of Padrón, some 20 miles south of Santiago.

His elaborate grave is in Padrón, and a street there is named for him but, like crab cakes in Baltimore, the area is best known for food: small green peppers — mostly sweet but now and then very hot without any way of knowing — fried in a skillet and sprinkled liberally with coarse salt.

Called “pimientos de Padrón,” I ate them throughout Galicia, waiting for the one that would take the top of my head off, and in Santiago enjoyed a full bowl of them with a plate of grilled octopus known in Spain as “pulpo.”

Mazurka — set in the 1930s of the Spanish Civil War (and earlier in various reminiscences) is a kaleidoscope of confusing narrative that somehow gels as it gains momentum, weight, and context; a buzzing hive of gooey gossip (and natural springs of bodily functions by humans and animals) that is nothing if not “a people’s history” of Galicia.

In the stories my American-born father recounted — interpretations of stories his father told him long ago — Dad said that old Galicia (damn near medieval through the early 1970s) was “the West Virginia of Spain.”

In this way, Mazurka struck me as a Spaniard’s version of the work of Harry Crews, except that Cela was born to wealth and influence (thus the superior attitude that infuriated so many), and Crews was a dirt-poor country boy from Alma, the blueberry capital of the Peach State.

In one of Harry’s novels, a man eats a red 1971 Ford Maverick, but no one in a Crews’ story, to my knowledge, coaxes a monkey to orgasm.

And, it helped me better understand my grandfather Rafael Alvarez Veiga (1904-1990), who, as a boy, bred rabbits for sale until he had enough pesetas to buy a horse; gave me some insight into why, as an aging widower, “Wonder Woman” was his favorite TV show; and, when he thought one of his East Baltimore neighbors was on the make for a hefty housewife, made a face like a small boy smelling stinky cheese.

Cela’s Galicia as wonderfully recounted in Mazurka is the Spain that Grandpop never talked about.