What Alejandro Escovedo reads on the road 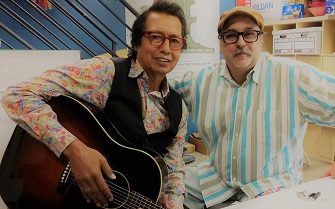 I have interviewed hundreds of musicians over the years — from Frank Zappa to Nils Lofgren to Jose Feliciano — and often end the conversation with two questions just for fun: What are you reading? And what do you think about the blues guitarist Johnny Winter?

Let’s skip the second for now, except to quote Muddy Waters, who said, in 1981, that “Johnny Winter is the only white man who really understands the blues.”

(Winter, who died in 2014, is one of my more abiding obsessions. Legally blind, he relaxed with vodka and reruns of “All in the Family” on the road. I never asked him what — if anything — he read.)

A week and a year ago, I spent some time with the Texas musician Alejandro Escovedo before he appeared with Joe Ely at the old Patterson movie theater in East Baltimore.

Now 67, Escovedo warmed to the idea of talking about books and, like many always-on-the-road musicians, said reading was among his favorite pastimes while traveling across the country, some years more than 300 days.

Born outside of San Antonio to Mexican immigrants, Escovedo and his family moved to Orange County, California, when he was 5. He remembers his father — “sort of a Mexican Clark Gable,” he said — reading the daily paper.

Escovedo’s mother — born Cleotilda Renteria before suddenly changing her named to Evita after seeing the Madonna movie — was an avid reader partial to Steinbeck and Hemingway. Of special favor with Cleo was the 1942 novel of the Crucifixion, The Robe, by Lloyd C. Douglas.

She was less fond of Lou Reed and the Velvet Underground, smashing the group’s Warhol banana LP upon hearing the song “Heroin” oozing out of the family phonograph when Escovedo was a teenager and the family lived in Santa Ana.

The dope poets were as close at hand as the public library — and a bad case of hepatitis-C for Alejandro down the road — the writers more dangerous, perhaps, than the junk that seeped into their verse.

“I read the right books,” Escovedo told a reporter in a previous interview. “But maybe the wrong books, too.”

Outside of anything by Ayn Rand and Mein Kampf, can there be such a thing?

“The [writer] that really informed me when I started writing lyrics was Raymond Carver,” said Escovedo, the father of seven. “I talk so much about family in my songs and I’ve had such shite luck when it comes to relationships” that the bleak domestic stories of Carver were a beacon for narrative.

Escovedo made his first dent in the scene in the late 1970s with a punk band called the Nuns, who opened for the Sex Pistols at the Winterland Ballroom on January 14, 1978, the final date of the British band’s only American tour.

Forty years later, he has released a new album called “The Crossing” on the Yep Roc label. The disc’s first single is titled “Outlaw for You,” and on it, Escovedo name-checks a few writers you’d expect from a literary rocker born in the early 1950s: Kerouac and Ginsberg, yeah, yeah, yeah.

But, then, just before the song fades out: “I’ll be Octavio Paz for you…”

Was ever anyone wooed thus?

Rafael Alvarez is the author of Basilio Boullosa Stars in the Fountain of Highlandtown. He can be reached via maconstreetbooks.com.

How a Greek prayer book was rescued in Baltimore