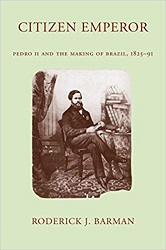 By a strange twist of fate (have I said this already?), my family and I have been able to follow the Portuguese trade routes — Nagasaki to Macau, China, to Salvador, Brazil, to Portugal itself — in our travels.

But I also believe that reading, even if the book isn’t particularly good, can transport a person to a place that provokes them to identification and empathy with those about whom they have no other means to learn.

In fact, I consider it a moral obligation to read beyond any fixed boundary and to seek out stories from other cultures, particularly those within the Portuguese colonial experience. So, when my son became a Portuguese major and recommended a book called Citizen Emperor: Pedro II and the Making of Brazil 1825-91, by Roderick J. Barman, I picked it up.

Published in 1999, it’s a dense, heavy textbook, as clunky a biography as one would ever wish to read, with 20 pages of index, 12 pages of works cited, and 90 pages of annotations. Generally, I enjoy bouncing between text and notes, but not with this one. It was a slow read, and it helped me to nap numerous times.

But the story is well-nigh fictional. A boy’s mother dies in Rio de Janeiro in 1826 when he, Pedro, is 1 year old. His father, the emperor of Brazil, remarries, and the boy loves his new mother. But his father, who, less than 10 years before, had declared Brazil independent of Portugal, abdicates his Brazilian throne to return to the Portuguese one when the boy is 5.

Pedro never sees his father or stepmother again. He and his three sisters grow up in Brazil, isolated from almost all other children and a normal life. One sister dies, and the two others are eventually married off (in their teens) to princes in Europe.

The only thing Pedro is to become is emperor of Brazil, which happens when he is 6! A regency is created to hold the reins of government until the boy comes of age, but it is tumultuous and, nine years later, in 1840, the entire society is relieved to declare the boy “of age” at 15.

Looking at that as a writer, I think this is a system made to drive anyone insane. Those European aristocrats kept marrying their cousins. Author Barman offers table one, “The Ancestry of Pedro II,” on page eight. The chart goes back five generations, from Pedro’s parents to his great-great-great-grandparents, the place where all humans should have 32 ancestors. But, Pedro’s chart has only 14 different names, one of which, Charles V of Spain, appears five times.

And that’s just the genetic inheritance.

His mother’s death and father’s abandonment, his isolation, his education in French, his incredibly heavy fate of duty, were all ready-made to create a madman, but Brazil got lucky. Neither Pedro’s mind nor his body (although he did suffer epileptic seizures as a child and he looked very much like Charles V) would betray him until late in life.

Early on, Pedro chose to take up the yoke of emperorship. Barman recounts the dull in such detail that the exciting is not always easy to fathom, but there are moments worthy of majestic fiction:

Barman reveals that Pedro’s monarchic role in the constitution was as a “regulating” power. In essence, and more so over time, as Pedro matured into his role, this meant that the monarchy controlled the government.

In Pedro’s early years as ruler, his conservatism was less apparent. But as time passed, and Brazil made economic and political progress, the burgeoning society (for example, in the debate over when and how to abolish slavery) came to regard his rule as sclerotic.

Barman highlights the very long despachos, meetings where the ministers of the government were told what to do by the emperor. Over time, and with the necessity of greater activity from the government, Pedro’s resistance to change became the force that drove him out of Brazil.

He himself said, “I would be republican if I judged Brazil sufficiently advanced for that form of government.”

A convenient position for a man who inherited the emperorship.

He was affected by his entitlement, but Barman reveals that Pedro’s use of power was actually noble. He tried, in his way, to be disinterested and to regulate the government impartially for the benefit of his country. He just didn’t believe the people could rule themselves.

Eventually, enough Brazilians believed they could rule themselves that they overthrew him, bloodlessly, and exiled Pedro and his wife to Europe, where, within two years, they would both die and be buried.

When readers keep their minds open to others’ experiences and lives, they cultivate strength. Understanding makes us compassionate and draws us to the commonality of all humanity. The story of a little orphan boy who became emperor in a faraway time and place is the narrative foundation of “Star Wars” and Harry Potter. But Pedro II was real.

Y.S. Fing wishes to stress that representative democracy is the best form of government.