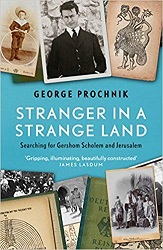 From Midas to the modern-day lottery winner, in all civilizations, through all of time, human narrative is strewn with the warning, “Be careful what you wish for.”

Irony abounds when the person who gains the thing that destroys them has been working their entire lifetime to achieve that end. The most recent example that I’ve come across of this infinitely repeated tale has been Stranger in a Strange Land by George Prochnik. Here, we have the story of Gershom Scholem and the 20th-century struggle and triumph of the Zionist dream of an Israeli homeland.

I’m a near beginner on Israeli history, and even less familiar with Scholem, Walter Benjamin, and the mystic Judaic texts that comprise Kabbalah, which are the subjects of this dense, compelling book. And, full disclosure: George Prochnik is the elder brother of a dear friend of mine, photographer and artist James Prochnik. James gifted me the book with an inscription, “Out of wreckage, new things will come!”

Another of Prochnik’s books, Putnam Camp, has a similar structure, in that he uses personal connections (his Putnam great-grandfather was a colleague of Freud’s and helped introduce psychoanalysis to America) to delve into an historical character and examine their milieu and the meaning of their work. It’s an effective approach in Stranger in a Strange Land, particularly, because I wouldn’t have understood nearly as much about Scholem without the interweaving of the author’s personal narrative.

Scholem was born and raised in Germany to assimilating Jews on whom, from early in his life, he looked down. He had a spiritual bent and a deep, scholarly longing to know more about Judaism as a means of finding a life different from the empty material world of the German bourgeoisie.

He also happened to be a great friend of Walter Benjamin, one of the mid-century’s foremost critics. Walter succumbed, as did much of Scholem’s family, in the European conflagration of WWII, but Gershom had long been in Palestine by that point.

Prochnik highlights the flawed “Orientalist” thinking that European Jews brought with them to Palestine both in the early days and once the nation of Israel was established. Those preconceptions of “exoticism” quickly became self-justifying prejudices, and the processes of the apartheid state in Palestine today were begun in the hearts of the Zionists of Scholem’s time.

The vast majority of this book takes place in the first half of Scholem’s life: the long struggle to actualize himself and to create the philosophical foundations upon which Israel would grow. As an historian and scholar, Prochnik says this of Scholem: “By conducting a herculean analysis of countless texts long viewed by Jewish historians as nonsense — Scholem had single-handedly created an academic discipline out of an obscure theological tradition, and challenged academia itself with a lush, alien spirituality.”

But Prochnik touches lightly on Scholem’s books themselves, instead using his long, complex relationship with Benjamin to examine the development of his ideas. At first, Scholem saw Benjamin in a hero-worshipful way, an ideal to strive toward. But as they grew, and Benjamin married and lived a dissolute life, Scholem separated himself both emotionally and physically. Scholem left Europe; Benjamin stayed until it was too late.

Prochnik has also written a book on Stefan Zweig, The Impossible Exile, “an object lesson in the different forms of homelessness conferred by the conflict between the nation and the individual.” For Prochnik, Scholem’s “life trajectory seemed to present not just an alternative but an antithetical narrative: the founding of a home where there had been no home before.”

He quotes Scholem himself:

“The building of the land of the Bible and the foundation of the state of Israel represent, if you will allow me to use a daring formulation, a utopian retreat of the Jews into their own history.”

Scholem’s life in Palestine and Israel was certainly more fulfilling than the way that Zweig and Benjamin ended their lives (by suicide during WWII). And the success of his life, among other things, drew Prochnik and his wife to Jerusalem, too, just a few years after Scholem died. They were only too happy to flee American bourgeois culture and take their places in the “utopian retreat.”

“Part of what I found confusing was the air of performance that imbued the actions of both sides — the repetitive, iconic gestures of defiance and command that gave the scenes of attack, flight, and capture the feel of archaic drama on a loop tape.”

And so Prochnik’s experiment failed. He couldn’t sustain the cognitive dissonance of “the utopian retreat” versus the occupation of the West Bank. He and his wife returned to the U.S. deeply disillusioned. For this reason, Stranger in a Strange Land conveys a melancholy melody. High ideals are hard to live up to. And be careful what you wish for. You just might get it.

Y.S. Fing is going to read more about Kabbalah.

Our Future Remembrance of Things Past