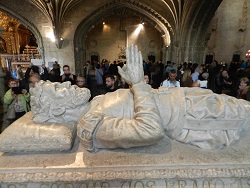 We are thus like the holy temple
That on the beaches of the sea is settled,
That the name has of the earth, for example,
Where God was in flesh to the given world.

My father was a prolific poet and, because he wrote a great American epic poem and subsequently disappeared from my life, I have studied more epic poetry than I ever expected a person could bear — Homer, Virgil, Dante, Spenser, Milton, Whitman, Eliot, Ginsberg, and Fing, among them.

Having disciplined myself by working through so many dense articulations of personal artistic vision, I enjoy the chance to encounter new writers and epic works. They seem to me to be definitive of entire cultures. Who wouldn’t admire that?

As luck would have it, I’ve spent consequential time in a couple of far-flung enclaves of Portuguese colonial reach. I lived in Nagasaki for about four years, where the Portuguese maintained a trading post from 1543-1635. I began to be fascinated by Portuguese expansion. And Macau, now in China, was far more important to the Portuguese. I had the good fortune to work for a summer in Macau, in 2010, where I first encountered Luís Vaz de Camoes.

The great epic poet and master of Portuguese literature had been in Macau in his episodic life, having been chased out of Goa for his unchaste behavior. He made a great impression in Macau and is memorialized by a park, statues, and plaques throughout the city. So, while I resided there, I took up Camoes’ “The Lusiads.” I understand that translations into English are not well-regarded, because of the rhyming and the antiquity of Camoes’ Portuguese. It can be a slog to read, with more obscure allusions than Poe.

But the life of Camoes, and the journeys of Vasco da Gama, the subject of “The Lusiads,” are compelling. Camoes was born into a lower-ranking aristocratic family who had neither money nor power. Legend has taken over where lack of evidence exists through much of his biography. His father died in a shipwreck when he was young. His mother helped to educate him at the University in Coimbra. He is supposed to have entered the court in Lisbon but been exiled for an indiscreet passion for one of the king’s mistresses.

He spent most of the next 20 years in military and diplomatic service from Morocco to Mozambique, from Goa to Macau, fighting for the Portuguese crown against the Moors of northern Africa, losing an eye, being exiled from Goa, and making a fortune in Macau. All along, he worked on his magnum opus. However, while leaving Macau, his ship went down, and he lost his many golden ducats while saving the manuscript of the poem.

Slowly taking his impecunious and wearying body backward along the Portuguese trade lines, carrying the manuscript of his epic work, written in ottava rima, eight-line stanzas, of 11 syllables per line, totaling 1,100 stanzas, Camoes stalled in Mozambique and lingered penniless until a friend arrived coincidentally and was able to fortify him with money which allowed him to return to Lisbon. He arrived in a time of plague and his work wasn’t published for three years.

When “The Lusiads,” an all-encompassing history of Portuguese trade and paean to exploration and the spirit of his people, came out, the public response was tepid, but the royal family bestowed a small pension on the great poet.

Camoes might have lived out his days in peace, if not happiness and health, even then, but the Portuguese crown withdrew the pension, and he died in un-succored sickness in Lisbon in June 1580, less than 100 years after da Gama’s great feats. Camoes was also sick for the future he foresaw for Portugal. The days of great men and great feats were over. He entered oblivion a defeated man.

His travels also happened to be the exact path of Vasco da Gama, so Camoes could recount the environments da Gama discovered and the nautical challenges he’d faced to establish the trade routes which so enriched Portugal, and which so bedeviled Camoes with splendor and squalor. As disciplined as a man can be, a conquering, self-sacrificing soldier, or an exacting ambitious poet, he can also be detached from the consequences of his actions.

Da Gama could have only little knowledge of what a globalized world would become, but he took it upon himself to embark on the journey around the Cape of Good Hope. Da Gama sailed south, “taking advantage of the prevailing winds along the coast of Africa. His choice of direction was also a bit of a rebuke to Christopher Columbus, who had believed he'd found a route to India by sailing east.”

Da Gama purposefully sought glory, did some damage, and was disappointed at his recompense. Although one must imagine his proud feeling to be named a viceroy in India in 1524, that pride only lasted a brief time, for within months of arrival in Cochin, India, he was dead.

The parallels are striking, no?

That’s why I enjoy epic poetry, because when a great theme is chosen, great work can be done. “To produce a mighty book, you must choose a mighty theme. No great and enduring volume can ever be written on the flea, though many there be that have tried it.” That’s Herman Melville. But Camoes understood it, too, which is why he swam in the open ocean with both arms holding up the manuscript of “The Lusiads.” He and da Gama were bound by fate to three-dimensionalize our understanding of that historical moment, when the Portuguese were the first truly global empire in the world.

A great epic poem is a synthesis of history, philosophy, and literature, a monument to the times and the people whom the work examines. It’s also the outward turning of the mind who has created it. Camoes was an active participant in the world he observed, and he brings such dash and delight to overcoming challenges that discovering the workings of his swashbuckling, romantic mind is a great pleasure.