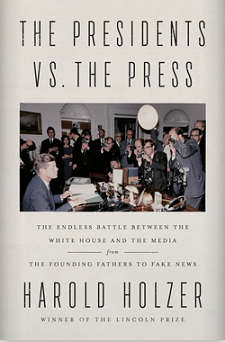 Unavoidable Truth About American Presidents: Most have had colossal egos and the thin skin that goes with it.

The 231-year confrontation between these unavoidable truths fuels Harold Holzer’s timely and informative new book, The Presidents vs. The Press: The Endless Battle Between the White House and the Media — From the Founding Fathers to Fake News.

The author starts at the beginning. Toward the end of George Washington’s first term, the press’ “escalating editorial invective,” ramped up by “a revolution in printing technology,” became the bane of his existence. Two of his leading disparagers were none other than Ben Franklin’s dastardly grandson Benjamin Bache (his most rabid assaulter, who asserted mainly bogus claims six days a week in his newspaper, the Aurora) and Thomas Jefferson (an undercover antagonist who promoted criticisms of Washington either anonymously or through the words of others).

Unaccustomed to the criticism which he deemed totally unjustified, Washington had the self-control to grit his false teeth and soldier through the avalanche of ill-considered barbs, somehow finding the fortitude to respect the new Constitution’s First Amendment, and ending his presidency as “the first to stand in the cross hairs of the press, but the last to turn the other cheek.”

Successor John Adams believed the press’ attacks on him were so dangerous that they posed a threat to national security. Thus, he was pleased when his Federalist colleagues in Congress passed the Sedition Act in 1798, which made it a crime punishable by incarceration for anyone to criticize the president or his party’s position on the issues of the day.

The Act basically worked to get rid of the problem until the end of Adams’ term, though his support of the obviously unconstitutional statute, Holzer writes, “earned [him] a resoundingly guilty verdict for dictatorial impulses and censorious overreach…and forfeited his reelection, squandered his reputation, and helped hasten the demise of the Federalist Party itself.”

While Jefferson had actively supported the partisan press as long as its guns were aimed at his adversaries, once he became president and “the artillery of the press was leveled against us,” they incensed him every bit as much as his predecessors, to the point that he left office saying, “Nothing can now be believed which is seen in a newspaper.”

Holzer lauds those presidents who, after the Founders’ era ended and science continued to advance, achieved success in overcoming the hostile media by taking advantage of new technology to get around their critics: Lincoln with his restrictive control of wires; FDR with his Fireside Chats on the radio; JFK with his charismatic performances at televised debates and press conferences; and Obama and Trump with social media.

Although the author is regarded as one of the leading experts on the life of Abraham Lincoln, he pulls no punches in his criticism of the Great Emancipator as “the most repressive censor” in presidential history. Throughout the Civil War, Lincoln refused to let the press interfere with his plan for doing what it took to save the country. If that meant arresting “scores of editors, banning disobliging news from telegraph wires, and seizing and confiscating printing presses,” then he did what he thought was needed to advance the Union’s war effort and ultimately restore the nation.

Holzer believes that Lincoln could presumably live with his conscience amidst his many First Amendment violations by his “willingness to tolerate newspaper criticism during the election cycles” of 1862 and 1864.

More than half the book is devoted to the presidents since the Kennedy assassination. Until the last 12 years, Holzer argues, the press prevailed in most battles with the White House in the modern era based on these assessments:

A surprising aspect of the book is the author’s objective treatment of Presidents Obama and Trump, given his acknowledgement that he has always leaned to the left politically, as evidenced by his past jobs with Bella Abzug and Mario Cuomo. Despite that political orientation, his accounts of Obama’s relationship with the media are highly unflattering, noting that the 44th president stood out for his “aggressive blocking of press scrutiny and making professional life difficult for his critics”; and “avoiding the press became his standard operating procedure.” He also quotes Pulitzer-winning journalist James Risen’s labeling of the Obama team as “the greatest enemy of press freedom in a generation.”

Regardless of his hostility to the media, Holzer recognizes that Obama succeeded in elevating his stature and conveying his message directly to the American people by dispensing his perspective through the White House website and addressing millions of followers on multiple social-media platforms.

In his analysis of President Trump in the book’s last chapter, lifelong liberal Holzer makes the shocking statements that, regardless of one’s politics, the current president is “one of the most effective communicators in White House history” and a “transformative genius in communication” who has achieved his goal of having close to a majority of Americans genuinely distrust the press due to the consistent application of his “golden rule: quash the message and squash the messenger.”

In the final paragraph, the author expresses his fear that the result of Trump’s arguably successful war with the media is that it “may usher in a permanent upheaval in which Americans never again agree on basic information or trust in traditional sources of news.” Holzer’s unsettling final prediction of future president/press/voter distrust should not surprise Bill Clinton, whom the author quotes in a passage from the novel the former president wrote with James Patterson:

“The media knows what sells — conflict and division. It’s also quick and easy. All too often anger works better than answers; resentment better than reason; emotion trumps evidence. A sanctimonious sneering one-liner no matter how bogus, is seen as straight talk, while a calm, well-argued response is seen as canned and phony.”

With this observation, Clinton essentially expressed the sentiments of all his Oval Office predecessors and successors. The Presidents vs. The Press proves once and for all the fact that history not only demonstrates how much things change because of technological advancements, but also how much they stay the same because of the inevitable collision between the irresistible force of enormous presidential egos and the immovable object of the capitalistic American media which has always operated under the credo “money talks.”

Talmage Boston is a trial and appellate lawyer in Dallas and an historian whose most recent book is Cross-Examining History: A Lawyer Gets Answers From the Experts About Our Presidents.