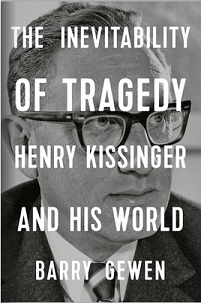 A beneficiary of his own theory, Harry Truman once observed that historians should wait 50 years “for the dust to settle” before making final assessments. Sounds reasonable. It’s now been over 43 years since Henry Kissinger stepped down as Gerald Ford’s secretary of state and, thus, close enough in time for New York Times Book Review editor Barry Gewen to satisfy Truman’s preferred schedule for historical analysis and have confidence in his conclusions in his deeply insightful new biography, The Inevitability of Tragedy: Henry Kissinger and His World.

During his eight-year run as America’s top foreign-policy leader during the Nixon and Ford presidencies (1969-1977) and ever since, Kissinger has had plenty of admirers and detractors. The lack of consensus about the wisdom of his decisions arose, on one hand, because of his shrewd manipulation of international affairs: He succeeded in opening the door to China; negotiating the SALT Treaty with the Soviets; engineering shuttle diplomacy in the Middle East during the 1973 Arab-Israeli War; and bringing an end to America’s involvement in the Vietnam War.

On the other hand, Kissinger’s protracted détente game plan prioritized achieving global order by effecting a balance of power (in lieu of supporting democracies and advancing human rights), and was thereby guided by realism over idealism, and diplomacy over military hardball. Thus, his approach to foreign policy has caused his critics on the far right and far left, as well as among neoconservatives, to view him as amoral, evil, and/or weak.

This more-than-four-decade split of authority suggests the need for fresh views and intellectually honest discourse on Kissinger’s diplomatic career, and Gewen has risen to the challenge.

The book gets off to a fast start with the author’s explanation of his subject’s controversial position in opposing Salvador Allende’s Communist reign in Chile after he became president there by winning the democratic election in 1970. Kissinger shocked American sensibilities at the time with his statement, “I don’t see why we have to stand by and watch a country go Communist because of the irresponsibility of its own people.”

Per chapter two, Gewen is certain that his subject’s response to Allende’s rise to power was tied to Kissinger’s own adolescence having been upended in the mid-1930s due to Hitler’s becoming leader of Germany via the democratic process. Though Kissinger has always denied that his experience with the Nazis impacted his foreign-policy philosophy, as with other claims he’s made through the years with a straight face (like saying he “never supported” the war in Vietnam and “never recommended” wiretapping government colleagues), Gewen’s research makes clear that these stated positions have not always been forthright.

Chapters three and four cover Kissinger’s most influential mentors: fellow German-Jewish, Hitler-influenced, Realpolitik scholars Leo Strauss, Hannah Arendt, and Hans Morgenthau. These 131 pages are not for the dilettante. The author must surely believe that understanding them is essential to grasping what inspired Kissinger’s ultimate foreign-policy outlook, though getting through this dense material requires heavy lifting and will test the reader’s willingness to delve deep.

The author’s having succeeded in making the argument that Kissinger’s international perspective arose from his early experience with Hitler, intellectual interplay with Strauss, Arendt, and Morgenthau, and extraordinary knowledge of world history (which allowed him to be guided by parallels from events centuries apart) sets the table for the biographical feast contained in the final three chapters, entitled “Vietnam,” “Kissinger In Power,” and “Kissinger Out of Power.”

These 165 pages provide a persuasive analysis of why many American foreign-policy decisions have been made over the last half-century, for better and for worse, by Kissinger and others when, too often, the difficult choices were not between bad and good options, but between bad and less bad, meaning every choice has necessarily been a tragic one.

During this era, of course, the watershed event was America’s involvement in the Vietnam War: “the wound that will not heal”; “the greatest single foreign policy error made by the United States”; “where 58,000 Americans died for a mistake”; and whose “evident meaninglessness [was] the sixties generation’s defining experience.”

Vietnam, at the height of escalated warfare by both sides, and as mis-analyzed, mis-engineered, and misrepresented for over five years by Lyndon Johnson, was the real-life nightmare Kissinger agreed to enter in January 1969 when he accepted President-elect Richard Nixon’s invitation to become national security advisor. To their eternal regret, Presidents Kennedy and Johnson had started and then ramped up U.S. military involvement in Vietnam in the mid-1960s on the basis of believing the “intellectually untenable” Domino Theory.

Once hundreds of thousands of American soldiers began making their stand there, mounting casualties in the quagmire combined with a national outpouring of protest and led the United States toward a “national nervous breakdown,” which drove LBJ to such despair that he refused to seek a second term in the Oval Office. Nixon then defeated Johnson’s vice president, Hubert Humphrey, in the 1968 election on the ambitious platform of getting America’s 550,000 troops out of Vietnam while somehow achieving “peace with honor.”

That desired result could happen only through negotiation, and given that North Vietnam’s leaders justifiably believed they were winning the war, they saw no reason to negotiate except on the basis of a unilateral withdrawal by American forces.

What to do? As Nixon withdrew America’s ground troops to fulfill his campaign promise, Kissinger persuaded his boss to bring the enemy into a bargaining frame of mind by having the U.S. conduct a massive air-bombing campaign, thereby creating the paradox of pursuing “a war for peace,” which many understandably found unintelligible.

Regardless of the bombings’ tactical rationale and Kissinger’s ultimate success in getting the United States out of an unwinnable war while saving at least some face, too many Americans saw no meaningful difference in the conduct of Johnson and Nixon vis-à-vis Vietnam.

At the heart of the great “Kissinger assessment” divide is the issue of whether U.S. foreign policy should be guided by the desire to spread American ideals and values around the world or the desire to maximize global order by achieving a balance of power — i.e., the split is between proponents of idealism and realism, which has brought on the battle of passionate crusaders vs. existential Realpolitikers.

For over a century, every step of the way, crusaders have waved Woodrow Wilson’s ideological flag, “We must make the world safe for democracy!” Thanks to their heavy-handed moralism, they have inspired the United States to tilt at windmills in Korea, then Vietnam, and then Iraq.

Thus, to Gewen, history has proven Wilsonians’ approach to foreign policy ineffective and often counterproductive, while the results of Kissinger’s doctrine have been more satisfactory, as evidenced by the balance of power he pulled off during Nixon’s terms by playing the Chinese off the Soviets, Middle Eastern countries off each other, and the U.S. off the Soviets in the SALT talks.

The main problem with championing Kissinger’s approach is that it requires the advocate to make the case for a cause that’s complicated, not simple; ambiguous, not clear; grey, not black-and-white. Pushing a complex agenda anchored by the recognition that America’s influence in the world has its limits is not a cause that inspires standing ovations — though, if its truth had been promoted by political leaders and accepted by the voting masses since World War II, the United States would likely have avoided or at least lessened the disastrous outcomes of at least three wars.

In The Inevitability of Tragedy, Barry Gewen accurately depicts his subject as a man with many flaws who’s made mistakes. In spite of that, there’s a reason why every president from JFK through Barack Obama has sought and relied on Kissinger’s advice.

He’s now been advising leaders over the last half-century with an international-affairs analysis based on the lessons of history; diplomatic strategies based on an intimate knowledge of world leaders’ priorities and personalities; and an awareness of America’s limits that prevents our country from having the resources to function as the world’s policeman.

As the dust settles on Henry Kissinger’s lengthy career, prudence dictates that his approach and vision continue to be heeded in order for the United States to maintain its power by avoiding well-intentioned but devastating errors.