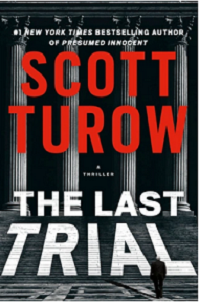 A well-written, fast-paced plot can, by itself, cause a novel to be deemed “good” by the masses. Add to it some engaging, nuanced characters depicted so vividly they become imbedded in the reader’s psyche, and the evaluation needle moves to “great.”

Finally, those who seek to grab the brass ring in creating fiction manage to insert into their vigorous plots from the minds of their intriguing characters a few head-snapping insights on life’s big issues. The writer who pulls off this trifecta positions himself for the ultimate tribute: recognition that his novel is a “classic.”

No one checks all three boxes by luck or accident. To create a classic work of fiction, stars must align inside the novelist’s heart, mind, and soul in a way that pushes his creativity, word power, and deepest feelings to places where he and his readers have never been before. Meeting these requirements doesn’t happen often, but it has with the release of Scott Turow’s new book, The Last Trial.

The author, who first brought the legal-thriller genre to the top of the charts with his blockbuster Presumed Innocent, has now returned home to his sweet spot — Kindle County (aka Chicago’s Cook County) — and to his most enduring character, criminal defense lawyer Sandy Stern.

The 85-year-old Stern has practiced law the last few decades with his steely daughter Marta (now in her late fifties). They have as their paralegal Sandy’s granddaughter and Marta’s niece Pinky, a whip-smart, edgy free spirit whose face features a nail through her nose and whose volatile past includes drug arrests, competitive snowboarding (until she broke her neck), and lovers of both genders.

For “the last trial” in his legendary career, Stern has taken on the representation of old friend Dr. Kiril Pafko, a Nobel Prize-winning scientist whose company, Pafko Therapeutics (“PT”), has invented the miracle drug g-Livia. In its trials, the med successfully treated lung cancer, though to get FDA approval, Pafko failed to disclose that, after taking it, some test patients died suddenly from mysterious causes.

Upon gaining regulatory approval under false pretenses, PT’s stock price surged through the ceiling and stayed there until a Wall Street Journal article revealed the drug’s occasionally fatal side effects. Before the story hit the wire, however, Pafko managed to dump his shares for a cool $20 million. From these facts, Stern’s client has been indicted for racketeering, fraud, insider trading, and murder.

The trial’s other main legal participants — Judge Sonya “Sonny” Klonsky and lead prosecutor Moser Appleton — both have long histories with each other and the Sterns. As for the characters who aren’t officers of the court, Pafko’s long-suffering wife, Donatella, has endured his ceaseless philandering for a half-century, and now watches from the gallery. His son Lep, PT’s second in command, arrives on the scene to testify against his father.

Pafko’s former lover, Innis McVie, another PT leader for many years, also appears to testify against him. And his current hot-blooded mistress, PT’s marketing director, Olga Fernandez, injects herself into the middle of the trial’s action. These characters are all so richly etched that the reader can readily visualize and empathize with them.

Interweaving profound answers to life’s big questions into the flow of a novel is not advisable for a lightweight writer. For example, many have taken an ill-advised shot at attempting to go deep on how sexual intercourse figures in the grand scheme of things. Here’s Turow hitting the bullseye in three sentences through the mind of his protagonist:

“Stern had never seen sex as the only motivating force in life. Greed, glory, the love of children or God matters as much or more to some, but it is the most secret of our deep desires, revealed only in utter privacy. There is good reason that the Bible refers to the sexual act as ‘knowing’ someone.”

Another tight insight on a complex subject comes upon Stern while he’s reflecting on the trial’s developments, when he has a startling and sudden recognition of Nature’s plan:

“We mix and mate as part of her goal to combine and recast DNA. She is eternally looking for a better set of chromosomes. From her perspective, humans are essentially a race of shape-shifters, present temporarily before leaving our genetic material behind. We are all Nature’s fools, tricked by instinct into believing in the importance of The Self.”

Unlike most bestselling authors of legal thrillers, Turow has continued to practice law, which explains why he’s written fewer novels than his competitors. Staying grounded in what actually happens in courtrooms, his novels merit study by those who try cases for a living, as they provide some sage advice on conducting voir dire, making an opening statement, asserting evidentiary objections, staying in a judge’s good graces, cross-examining a witness, and delivering a closing argument.

“The law is humanity’s sanctuary, where we retreat from unreason. And humans need the law, because they need to believe there is some justice to their interactions, a justice that God or Fate or the Universe, call it what you like, will never provide on their own.”

From another angle on the same subject, as he pauses at his office window, watching the sun rise before he heads to the courthouse, Stern “thinks suddenly about his career”:

“Was it really worth it? But he has no doubt. Some speak of the nobility of the law. Stern has not always found that to be true. Too much of the grubby bone shop, the odor of the abattoir, emanates from every criminal courtroom. It is at heart a very nasty business to accuse, to judge, to punish. But the law, at least, seeks to govern misfortune, to ensure that a society’s wrath is not visited at random. In human affairs, reason will never fully triumph; but there is no better cause to champion.”

Yes, Scott Turow is a writer’s writer. And the literary device that separates the pro from the amateur in bringing images on the page into full bloom is the metaphor. These days, no one connects parallels quite like Turow, and he injects them into his books with high frequency.

Stern’s “childhood in poverty still clings to him like the scent of smoke after a fire.” On the witness stand, until the unexpected arrival of Olga Fernandez in the courtroom, Innis McVie “has looked as cool as a gangster machine-gunning enemies.” When her testimony crashes and burns from the heat of Stern’s piercing cross-examination, McVie’s “mouth is moving like a landed fish’s, desperate for breath.”

Though The Last Trial is Sandy Stern’s final hurrah, his creator has given him a proper sendoff. The character, the justice system where he’s worked, and the world in which he’s lived, all with their indelible strengths and flaws work together to make the turning of Turow’s pages sheer bliss for the reader with the horsepower to recognize and savor a piece of classic fiction.

Talmage Boston is a trial and appellate lawyer in Dallas and an historian whose most recent book is Cross-Examining History: A Lawyer Gets Answers From the Experts About Our Presidents (Bright Sky Press, 2016).