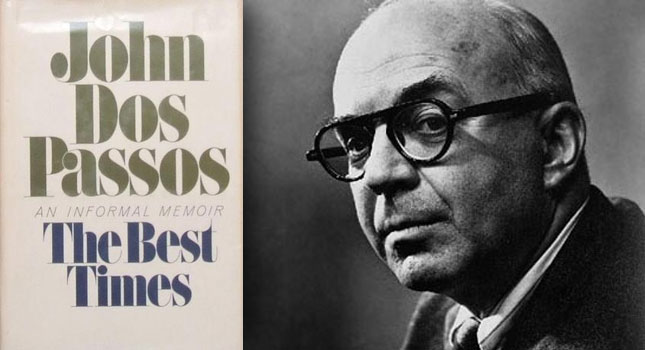 My grandfather, American author John Dos Passos, begins his memoir, The Best Times (1966), with a remembrance of his father, eminent New York City attorney and second-generation Portuguese immigrant John Randolph Dos Passos. In his elder years, the son finds the father’s letters on the mantel. “Time and again I have started reading the letters,” the son writes, “but each time it has been as if a great fist squeezed my heart. I just couldn’t go on. These are the letters my father wrote to me during the last seven or eight years of his life.”

If the time gap between grandparent and grandson is large enough, all that connects the living with the dead are letters. The older I get, the more I appreciate the eloquence of my grandfather’s memoir. Since I decided to write as a career, his printed words have gained value exponentially in my eyes.

The Best Times imparts information and inspiration. The book presents only a partial chronology; it stops in the 1930s. But its impressionism is so masterful that the story feels whole. The big branches on the Dos Passos family tree are detailed vividly and crisply. John Randolph Dos Passos, also known as “John R.” and “The Commodore,” enjoys bold portraiture. Even my Madeiran great-great-grandfather, Manoel dos Passos, receives a few telling brush strokes.

The Commodore’s overwhelming and influential personality lives in the memoir. “As I remember him he was a short broad-shouldered man, very bald, with gray mustaches that bristled like the horns of a fighting bull…There was a happy defiance in the way the curled points of his mustaches bristled. They responded to his mood. The few times I saw them droop I felt sick with dismay.”

My grandfather inherited that tendency to speed into life full sail. The method to his memory in The Best Times, which utilizes smell, sight, and sound, results in the same sensory feast found in his novels. John Dos Passos was a born sommelier of wine and all other delicacies of life—a foodie before the term popularized itself. Yet, he believed common, cheap pursuits could flex the spirit. A productive day of weeding or a long walk through the mountains would do wonders for him.

Nearly every aspect of Spain was cause for him to pick up the pen. “My chief joy,” Dos Passos writes, “is the Sierra Guadarrama; the long range of brown mountains to the North and West. Behind them the sun sets with numbing glory. I’ve never seen such sunsets; they stir up the soul the way a cook stirs a broth but with what a golden spoon.”

John Dos Passos hated to see friends succumb to self-destruction. He admired F. Scott Fitzgerald and praises his talent in The Best Times. When Scott talked about writing, his mind “became clear and hard as a diamond. He didn’t look at landscapes, he had no taste for food or wine or painting, little ear for music except for the most rudimentary popular songs, but about writing he was a born professional. Everything he said was worth listening to.”

Having outlived most of the Lost Generation, my grandfather found social spaces to fill in his later years. He strengthened friendships new and old with writers, scientists, and farmers who shared his unalloyed zest for life. He preferred company who mixed ambition with an equal part of common sense. Since The Best Times was written just four years before the author’s death, old acquaintances are filtered through this mature mindset. “Picasso was a small dark closed man,” Dos Passos writes. “He had none of the offhand geniality that makes Spaniards in general easy to get along with…He was skill incarnate. It was humanity that was lacking.”

The Best Times contains joyous odes to E.E. Cummings, poet and painter and animal lover. Perhaps my grandfather saw some of himself in Cummings—an earnest appreciation for life’s smallest gifts. “Cummings’s delight in certain things,” Dos Passos recalls, “was contagious as a child’s. Christmas trees, stars, snowflakes. Elephants were his totem. I would never have enjoyed snow so much if I hadn’t walked around Washington Square with Cummings in a snowstorm. He loved mice. He had a great eye for sparrows and all pert timid bright-eyed creatures.”

For me, nearly every passage in my grandfather’s memoir is a blueprint for how to live and how to write. No didacticism—just descriptions of emotional peaks and epiphanies only available to those who voyage as long and as determinedly as he did, in search of new and diverse friendships, customs, cultures, and cuisines.

When I read The Best Times on a winter day, I’m delighted to imagine my grandfather strolling along on one of his thousands of endless walks, up hills and down valleys and through badlands. Like other great American walker-explorers, John Muir before him and “Walkin’ Lawton” Chiles after him, Dos Passos found rejuvenation and illumination on the road. Whether he found a rock or a snakeskin or a strangely shaped cloud along the way, if it provoked thought, it was cause for excitement. I like to imagine him ending his journey at a mountaintop vista, surveying and recording the vast country below—doing what he did best.

My grandfather knew the value of good memoir. “In times of change and danger when there is a quicksand of fear under men’s reasoning,” he once wrote, “a sense of continuity with generations gone before can stretch like a lifeline across the scary present.”

John Dos Passos Coggin, author of the political biography Walkin’ Lawton, is a freelance writer and environmental advocate in Richmond, Virginia. He is currently working on his second book, a collection of critical essays on Hollywood film scores.