Sailing with the Greats 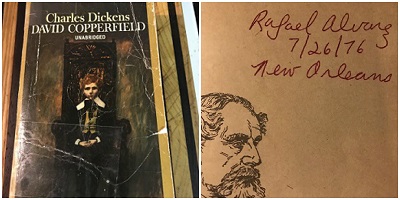 “[Charles Dickens] will teach any writer how to plot and can turn a sentence into an incantation...”

Funny, isn’t it, the way a book affects you depending on how old you are when you read it? Just like people: If only I had met her when…

The difference with a book, no matter how you are changed by the years, you can always go back to the shelf for another pass, while the would-be lovers of missed chances have moved far down the line, if not the grave.

After years of regretting that it wasn’t until my early 30s that I read On the Road, I am grateful that I did not read Ti Jean’s gem as a teenager. I might not be around today if I had.

I wound up taking in Kerouac’s 1957 classic at stoplights while running morning carpool for my children and a few neighbor kids. And was divorced soon afterward, by my own doing (see Roth, Philip) but not of my own choosing.

But, oh, what might have been if Sal and Dean had come my way back in ‘76 when I was right out of high school and worked a cargo ship that shuttled between Baltimore, Puerto Rico, and New Orleans? My life took plenty of hairpin turns without crisscrossing the country with Neal Cassady at the wheel. I do not regret that I did not take that ride as a teenager.

Instead, I wound up reading David Copperfield between my 4-to-8 shifts as an ordinary seaman and learned — at least in a very primitive way — how to connect the dots that keep a story moving forward, as referenced above by Ms. Leon.

First, a digression (a literary device I may have absorbed over my summer of Dickens) to the sallies of the Ingenious Gentleman Sir Quixote of La Mancha.

“When life itself seems lunatic, who knows where madness lies?” wrote Cervantes in Don Quixote, the mother of all Western-civilization novels, part one published in 1605.

What degree of lunacy is necessary to want to be a writer at age 18 and not knowing (blessedly) that others went to school to learn how those dots connect? (If you persevere somehow, they will.) Instead I pestered my father to get me a job on a ship and, pulling a few strings with old shipmates at the union hall, he did.

Like Moby-Dick and War and Peace, Quixote was one of those intimidating (at least to my teenage self) novels; a “great book” thick enough to hold the lid down on a crab pot while the Big Jimmies steamed.

Copperfield, just as thick, give or take a hundred pages, somehow did not seem as daunting, perhaps because I had read Scrooge McDuck comics as a kid at my Polish grandmother’s house in Baltimore’s old Canton.

My maiden voyage as a deckhand took place long before the Internet, when seafarers — however lacking in formal education — were among the best-read people in society. In every port of call, volunteers from union halls and various ministries would bring boxes of books on board and leave them in the mess hall for anyone to take what they wanted.

First box in San Juan: all junk — a small library of Louis L’Amour; spindled paperbacks with large-breasted women held by creeps brandishing long knives; and books made from blockbuster movies, as opposed to great books from which movies are made, like Doctor Zhivago.

(The moving picture of Pasternak’s 1957 classic — in hindsight, quite a year for books, romantic delinquents, and romantic Russians — was my Italian grandmother’s favorite movie. Although she was legally blind, she absorbed the film through shadows and light and dialogue. She “felt” the story as real as fingertips moving across braille, which she did not read.)

When I saw the book guy again, I asked him — with equal parts self-consciousness and a bravado I had no cause to exhibit in my shipboard duties — if he could bring some “literature” the next time he came aboard.

At the next port, in the next box — though the literary pickings were slim — I found a Signet paperback copy (1964 edition) of Don Quixote.

Unlike Herman Wouk — who died last week at 103 — I did not read Cervantes’ masterpiece on board, as the author of The Caine Mutiny had done while serving in the U.S. Navy during World War II.

But I did stow it in my sea bag and, when next in New Orleans (where I forsook the Quarter in favor of the public library, receiving a card entitling me to borrow anything I wanted, a keepsake I have to this day), made my way to the nearest bookstore.

It was there that I purchased David Copperfield (also Signet, 1962 edition) and commenced reading between shifts on deck. I knew it had originally been published in installments and persuaded myself that, because of this — the knee bone’s connected to the shin bone — I might learn something of structure along with the entertainment.

(I was such a 1970s metal-head — partial to the second generation of the British Invasion — that I knew of the band Uriah Heep before I knew that the name came from an especially pernicious character in the book.)

“Learning ain’t for me,” says Heep, his eye upon any pocket or soul to be picked without notice. “A person like myself had better not aspire.”

But I aspired. Oh, my heavens, how I aspired, writing to the Playboy “Advisor” — a column in one of the magazines brought onboard by those concerned with the intellectual health of sailors — to ask for advice on getting published.

After receiving a personal reply from Playboy recommending literary agent Scott Meredith’s Writing to Sell, I used my New Orleans Public Library card to borrow a copy. I needed to see my name in print even though I hadn’t completed anything beyond what only generously could be called poetry — lyrics set to the more melodic songs of Robin Trower and Led Zeppelin.

Through all that summer, Dickens was my guide. Reading and scribbling and smoking pot as the sun went down behind the fantail, Baltimore a hundred miles away up the Chesapeake; scribbling between shifts of chipping rust and heaving lines. Copperfield on my knee as I drank rum with the bosun, a man who resembled a Spanish Barney Rubble, an old salt who took his liquor with ice and milk in an empty vegetable can; writing letters about my unfolding dreams to Jeannie Goebert and Sandy Baker and Kathy Konopik and Janet Karcz; borrowing the steward’s typewriter to see how the scribbles might look on the page if they were published.

I still have that copy of Copperfield (as I do the donated Quixote, which I would read about 25 years later), but skimming it recently, I was disappointed to find that I had not written a single note in the margins.

(No book I read these days survives without enthusiastic, virtually uncontrollable defacement.)

I am sure I put down thoughts about what I was reading in the journal I kept that summer, the same one to which the poetic juvenilia was committed. But I stupidly threw it away, watching as a City of Baltimore garbage truck crushed it between rotten fruit and pizza boxes, not long after my first wife (who, on our first date, confessed that she, too, wanted to write) said, “Joe, I gotta go...we had it once we ain’t got it anymore…”

I have to believe that notes were taken when I came to chapter 55: “Tempest,” one of the great ocean storm tales in all of literature, the one where Ham Peggotty the brave and simple is drowned trying to save men from a battered schooner approaching Britain with a cargo of fruit and wine from Iberia.

Would not I have been a bit spooked to cross the Gulf of Mexico every 10 days or so having read the following:

“At length [Ham] neared the wreck. He was so near, that with one more of his vigorous strokes he would be clinging to it — when a high, green, vast hillside of water, moving on shoreward, from beyond the ship, he seemed to leap up into it with a mighty bound, and the ship was gone!”

I don’t remember, and I have no way of finding out.

The Protestant Cemetery of Rome

Keats and Shelley and "Don’t Miss a Beat."