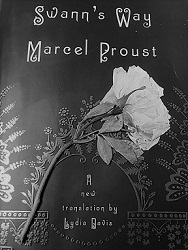 Ten months ago, I began reading Swann’s Way — volume one of Marcel Proust’s seven-book novel, In Search of Lost Time. I was by the pool at the Sportsmen’s Lounge in L.A. when I turned the first page of Lydia Davis’ heralded 2004 translation.

As I waded into the narrative alchemy of butter cookies and lime blossom tea and everything that follows, Frank Black of the Pixies, looking like a rumpled newspaperman from the 1950s, sat at the thatched patio bar, banging back what appeared to be mid-afternoon martinis.

(Later, I bumped into the guitarist/songwriter on the elevator, but instead of asking him about Proust, which I would bet five bucks he has read — perhaps more than once — we had a brief conversation about Johnny Winter.)

I finished Swann’s Way this past Halloween in Baltimore, copying out the glitter from the last paragraph — “the reality I had known no longer existed…the places we have known do not belong solely to the world of space in which we situate them for our greater convenience…” — in between tossing candy to kids at the door.

(No one came dressed as a Madeleine, no one as a liveryman or a haughty beauty with an ostrich plume in her crown. The closest any of the masqueraders who cried “Trick or Treat!” came to resembling the literary feast I had just consumed — but will be forever digesting — was a teenager without a costume who said, when asked, “I’m not anything.”)

From Valentine’s Day through All Hallow’s Eve is a long time to read a mere 444 pages. Yet somehow it felt as though it took me too long and not long enough all at the same time.

It is a book of small moments — trifles and tarts, both confection and coquette — a non-story propelled by the cinematic imagination of an especially sensitive boy, the kid I was long before the vocation assigned to me at birth had revealed itself; the kind of kid whose mother took long, worried looks as he swayed alone on the swing set in the back yard and asked herself, “What’s wrong with him?”

Ah, for the wherewithal to have replied, “Read Proust, Ma. It explains everything.”

I was not reading Proust when I visited the author’s grave in Paris in 2017. I was, however, carrying a book by Patrick Modiano, the Nobel Laureate (like Proust, half-Jewish) whose 1968 debut, Place de l'Étoile, features a self-loathing, anti-Semitic protagonist who spits the word “Jew” when mentioning Marcel.

But I was reading Proust this past summer in Tuscany, where my family rented a villa in Romola. One of the many bookmarks I used while wading through minutiae about the village of Combray and Monsieur Swann’s obsession with the woman sporting the aforementioned ostrich feather was a white rose. The flower had perfumed the table where the mother of my children and I celebrated our 60th birthdays, the reason for the holiday.

It is now flattened and beige, brown around the edges, slipped atop page 191, where Proust writes: “The dwelling I had rebuilt in the darkness would have gone off to join the dwellings in the maelstrom of my awakening, put to flight by the pale sign traced above the curtain by the raised finger of dawn.”

Back in East Baltimore, in order to finish the book in one year instead of two, I kept a duplicate of the same edition, its pages equally as scribbled upon, though not the same pages, as I alternated back and forth between the two, always having a copy close at hand.

My notes are free of annoying highlighting (the university is the public library, not the university), but marked with impassioned marginalia, associations with the text as exuberant as the narrator’s boyhood crush on the child Gilberte.

Who hasn’t had such a crush, the kind where every pebble — or, in Proust’s story, an agate marble — contains the universe if the object of our desire has but touched it?

“With admiring eyes I saw, luminous and imprisoned in a bowl by themselves, the agate marbles which seemed precious to me because they were as fair and smiling as little girls…

“Gilberte, who was given a great deal more pocket money than I ever had, asked me which I thought the prettiest. They were as transparent, as liquid-seeming as life itself. I would not have had her sacrifice a single one of them. I should have liked her to be able to buy them, to liberate them all.

“Still, I pointed out one that had the same color as her eyes. Gilberte took it, turned it about until it shone with a ray of gold, fondled it, paid its ransom, but at once handed me her captive, saying: ‘Take it; it is for you, I give it to you, keep it to remind yourself of me.’”

And who — be it the 10-year-old on the swings with Brian Wilson songs in his head that he doesn’t quite understand, or the 60-year-old who paid the price to empathize with Brian — has not lost his marbles at one time or another?

I am on to volume two, In the Shadow of Young Girls in Flower, and, perhaps by the next All Souls Day, will dutifully report back from the margins of lost time.

Rafael Alvarez is the author of the Orlo and Leini tales. He can be reached via maconstreetbooks.com.