Authority and American culture in The Wonderful Wizard of Oz. 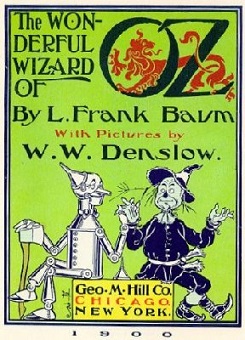 In the opening chapter of The Wonderful Wizard of Oz, a cyclone whirls madly toward Dorothy’s house. As it nears, her little dog, Toto, jumps from her arms and cowers beneath a bed. Dorothy goes after him without hesitation and, in so doing, loses her last chance for shelter.

By this time, Aunt Em has fled into the manhole, leaving Dorothy and Toto to fend for themselves. Though it reads like a minor detail, Em’s self-preservation is the story’s first crisis in the home/brain/heart/courage department, a failure of authority that sets the tone for a story ostensibly all about what happens when authority doesn’t live up to expectations.

But no bitterness here. Without the disconnect from leadership, there would be no odyssey. As Dorothy and Toto (along with their house) are thrilled away from Kansas to the land of Oz, it’s liberation and opportunity the reader feels, not betrayal.

When the house finally lands, man-slaughtering the Wicked Witch of the East (and earning our Midwestern heroine some mystical silver, not ruby, shoes), Dorothy is received by the Witch of the North and the Munchkins as a mighty new ruler.

Dorothy’s having none of it: “She knew very well she was only an ordinary little girl who had come by chance of a cyclone into a strange land.” She refuses the mantle of leadership and sets out to meet the Wizard of Oz, whom she believes can help her go home.

The friends she meets along the way — brainless Scarecrow, heartless Tin Woodman, and cowardly Lion — reflect homeless Dorothy’s naïve bearings in relation to hierarchy: The four of them are counting on a legendary higher power to give them what they want.

And yet Scarecrow is intelligent and proves a fine strategist when he instructs Tin Woodman to chop down a tree at the edge of a gorge, making a bridge for the group to cross. Sure, Scarecrow trips over his own feet and stumbles into ditches from time to time, but that’s true of many intellectuals.

Likewise, heartless Tin Woodman cries after he accidentally crushes a beetle, and cowardly Lion sends a gang of tiger-headed monsters scurrying with one savage roar.

Dorothy, too, wants something she already has. She yearns to get home, but her actions — chasing runaway Toto twice at pivotal moments — show home is with the little dog, just as he is at home with her, the latter being revealed after a dip into Toto’s perspective.

The collapse of authority charted through the second section of the story, then, is the characters’ lack of authoritativeness in how they see themselves, which sets the stage for the foursome to be manipulated by the Wizard of Oz, who uses their desires to send them on a journey they don’t want to undertake.

When he tells Dorothy and the others they have to kill the Wicked Witch of the West before he’ll grant their wishes, Dorothy says, “I never killed anything” — not quite true —  before rallying her band of brothers and setting off toward a reluctant assassination. (A dark lesson on the perils of being blind to one’s own resources and recourses.)

I petitioned people for their thoughts on The Wonderful Wizard of Oz and came away with a range of morals: Dorothy’s character as a feminist precursor; the importance of getting help from friends; and the inherent righteousness of fighting evil forces, particularly the Wicked Witch, who’s enslaved the Winkies.

One friend gave me a fascinating take on the story as a spiritual awakening, with the various colors — yellow bricks, City of Emeralds, etc. — as stand-ins for the Hindu Chakra system.

In the end, most agreed that, on a very general level, The Wonderful Wizard of Oz is a story about growing up.

For me, what makes the narrative most interesting is how it points to a set of core American values. In the earlier canon, The Scarlet Letter, with its themes of shame and conformity, stands up as a story about any fundamentalist community, not just the Puritan colonies. And Moby-Dick, set to heady transnational rhythms, introduces the sea and its creatures as an exhaustive, metaphorical statement on the nature of masculinity writ large.

That these 19th-century American classics cut across culture is evident in the way one can imagine that a Russian (for instance) might have written Moby-Dick, or that an Englishman (or woman) could have conceived The Scarlet Letter. What I can’t imagine, though, is The Wonderful Wizard of Oz existing outside its American context.

Listen for the echoes: Amid enslaved people, a diverse, advantaged group of seekers comes together to pursue individual aims. Their relationships with power are contradictory and ambivalent. They cooperate in order to meet personal goals. They have at their disposal new, do-it-yourself religions that assist in the push for self-optimization. And they’re fiercely protective of private property, as when Dorothy melts the Wicked Witch of the West for stealing her shoe.

After much insisting, Dorothy and her friends win superficial concessions from the wizard, who turns out to be the ultimate (and much foreshadowed) failed authority in the book. Will Oz’s quick fixes be enough? Of course not. Another journey awaits, and although mystery shrouds the way, Dorothy, Scarecrow, Tin Woodman, and Lion know it’s up to them to figure it out.

Dorothy Reno is a senior review editor and classic-books columnist for the Washington Independent Review of Books. If you would like to share your own interpretation of The Wonderful Wizard of Oz, we’d love to hear from you in the comments section below. You can join Dorothy in reading War and Peace, which will be the subject of her next column on August 10th.