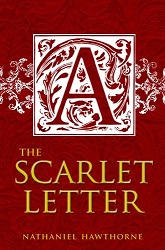 Hester Prynne emerges from prison with a 3-month-old baby in her arms. Blazing on the front of her dress is the ornately embroidered “A” branding her as the colony’s adulterer. A gifted seamstress, Hester has sewn this crest-of-shame by hand. As she’s led through the jeering crowd to stand on a scaffold in the center of town, her disgrace is on full and unbearable display.

Who has fathered this child? This is what they all want to know — the magistrates, the ministers, the gossip-hungry ladies at the front of the crowd. It can’t be Hester’s husband, because he went missing two years before and is now presumed dead.

But Hester refuses to out her lover. “And would that I might endure his agony,” she tells the crowd, “as well as mine!”

But who is that cool-eyed stranger among them, the one who is so dreadfully familiar to Hester? And why, dear reader, is the deeply respected village minister, Arthur Dimmesdale, so bereft over Hester’s ordeal?

Nathaniel Hawthorne’s classic novel, The Scarlet Letter, is a robust act of liberalism for its own time as well as ours. While Hawthorne felt connected to his Puritan roots, taking great pains to mention them in the semi-autobiographical introduction of the book, The Scarlet Letter is nevertheless a pointed anti-tribute to his forefathers. He casts them in a coruscating light, saddling them with a bad reputation that endures to this day.

(One needn’t ponder the meaning of the insult “puritanical,” a hint at the story’s cultural reach.) At its base, The Scarlet Letter is a social-justice story born of Hawthorne’s willingness to repudiate the gauzy comforts of glorified lineage in favor of an early feminist reckoning.

What’s being reconciled through the fictional story of Hester and her “illegitimate” daughter, Pearl, is based on historical examples of Puritan intolerance. Hester and Pearl’s being set apart from the rest of the colony, the name-calling from village children, and, of course, the scarlet letter Hester must never take off, are in the spirit of what Hawthorne wants to atone for with his novel.

Blameless Pearl, innocent to what has happened, knows no other way of life than that of a pariah. She develops an eerie disposition as a “witch-child,” further justifying Hester’s alienation from the rest of the colony.

But Hester’s not an archetypal victim, and her distinct lack of self-pity flies in the face of our notions of the bullied personage. She retains self-respect, counterintuitively, through submission. What she resists instead is the urge to petition the community for understanding and compassion. Her psyche is strong enough to bear the Puritans’ scorn, their disgust rendered all the more impotent for her game acceptance of it. (She does, however, ask them not to take her child away.)

In fact, Hester understands how much they need her. Scapegoating aside, there’s a demand for her embroidery work which livens up the Puritans’ otherwise gloomy garb. And thou hast sinned too, is the implication every time she attends to a ruff, a band, or a pair of gloves.

With the passage of time, even the Puritans can’t deny Hester’s remarkable self-possession, and members of the village come to see the scarlet letter as a token of her abilities. Near the end of her life, she’s becomes an Elder whose wisdom is sought in matters of the heart. A rather lofty position, finally, and one she’s earned through years of dignified suffering.

The non-bullied victim of the story is Arthur Dimmesdale, the preacher who is revealed to the reader early on as Hester’s one-time clandestine lover and father of Pearl. Revered by the people, he suffers more than Hester from guilt and self-hatred. Not a complete flunky, Arthur channels his anguish into sermons which touch and inspire the community.

But his secret is poison to the body, and his health fails. Before he passes, Arthur confesses his sin to the colony and reveals the central secret of the novel, the one that has been kept even from the reader.

The scene of Arthur’s confession, though, is strangely anticlimactic. Is it because seven years have passed? Or is because the Puritans can’t hear anything negative about him? Here, Hawthorne seems to be saying something chilling: Outcasts are strategically chosen not to protect the integrity of the community, but to satisfy a political climate.

On the face of it, The Scarlet Letter has remained relevant for its universal lessons on the mechanics of social coercion. In this vein, it’s encouraging to see the story pop up on high-school reading lists, even if the bullying link is a tenuous one for students to make. It’s easy, after all, for youth and adults alike to miss the moral gravity of the story given our temporal and cultural distance from it.

We underestimate the depth of Hester’s shame and Arthur’s self-loathing if we fail to transpose their ordeal onto the ethical framework of our times. To weigh Hester’s extramarital affair by our own standards will simply not do; we must learn to see her as a person in deep violation of a closely-guarded taboo if we are to appreciate the iron-nerve of living in the glare of a bad reputation.

As we read, we might imagine “that one time” we felt like Hester or Arthur, punished by the rules of an overly righteous office, neighborhood, or committee. And we might even ponder whether an open secret is better than a silent one.

We might wonder, too, whether fate has its own brand of justice, pairing us with enemies as it does with Arthur and Roger Chillingworth, Hester and her witch-child. But Hawthorne may have had something even more subversive to our sense of self in mind, as evidenced by his use of the “we” point of view throughout the story.

After all, don’t “we” (most of us, anyway) adhere to the convenient mores of our communities and police those who fail to fall in line? Don’t “we” acquiesce to the conventions which require the least risk to our own reputations and livelihoods? Are we not the Puritan mob?

And who can tell of the blindness we suffer from today, of the unenlightened groupthink our descendants will see so clearly by the light of tomorrow.

Dorothy Reno is a senior review editor and columnist for the Washington Independent Review of Books. Her short fiction has been published in literary journals such as Prairie Fire, FREEFALL, and Red Tuque Books. She lives in Tbilisi, (former republic of) Georgia. If you would like to share your thoughts on The Scarlet Letter, please respond in the comments section of this article. Dorothy hopes you’ll join her in reading Mrs. Dalloway, which will be the subject of her next column.