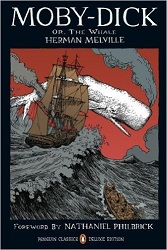 Moby-Dick has been hailed one of the greatest English-language classics of all time. Nineteenth-century adventure author Herman Melville evoked the White Whale as a catch-all allegory, and in doing so, wrote America’s foundational literary epic. Over 150 years after its publication, the story of Captain Ahab’s contra-Christian obsession is as ambitious as it is beguiling — and not easy to finish.

“Bad storytelling,” a friend once complained. Even at the time of Moby-Dick’s publication in 1851, the Boston Globe wrote: “Not worth the money asked for it, either as a literary work or as a mass of printer paper.”

If the topic under scrutiny here is the sperm whale in all its mammoth glory, there’s also a current at work tugging out to sea — and stranding — the notion that humans were ever central in the cosmos. At the heart of this, an existential dread. One that gluts Ahab’s need for mastery of the wilds.

A wild thing himself, Ahab wills forward the dot-like Pequod to search the oceans of the world for a singular whale. He paces the quarterdeck, his whalebone leg knocking madly on the planks, then disappears into his cabin for more lucid calculations of Moby Dick’s whereabouts.

Even a disengaged reader gone numb from the countless chapters of “whalesplain” will be electrified when Ahab proclaims the Pequod shall sail the world, only to be met with an ominous sign: a school of fish swerving decidedly away from the ship.

Then there’s the horrible bloodbath that ensues after a harpoon comes loose from a whale while the line is still tangled around its tail. As the whale flails, it sends the harpoon piercing into the flesh of its pod-mates.

In a chapter called Fast-Fish and Loose-Fish, Ismael tells readers about the difference between whales that are the domain of a ship and those which are free for the chase. In the chapter’s closing sentence, he turns aggressively on the reader, suggesting we are all bound by the fishing lines of possession, each of us a Fast-Fish.

Ahab’s inscrutable harpooner, Fedallah, interprets his captain’s dream in a sequence that reads like a gothic version of Joseph and the Pharaoh from the Book of Genesis. “I am darkness, leaping out of light,” is Ahab’s response after the sails blow off the Pequod and her masts are set afire by a lightning strike. Ahab’s harpoon, which is awakened by the blood of the ship’s four pagan harpooners, ignites with forked flame.

While the best in-story example of man-against-nature and man-against-his-own-nature is Ahab’s character, the theme is pursued further with the unusual and challenging form of the book itself. Ismael’s need to transfer a complete body of whaling knowledge is the cool-blooded parallel to Ahab’s searing obsession, and illustrates the totalitarian nature of the book’s central conflict. Nature’s indifference is not just vexing to Ahab; the entire crew aboard the Pequod must grapple with their mortality in whatever way they can.

Ismael goes a-whaling in the first place to cure the “November” in his soul. He believes the meaning of life will be found in the Earth’s waters — over which the mysterious ocean lords. Before embarking on his voyage, though, Ismael’s psyche will be readied and opened through an intimate relationship with Queequeg, a royal Polynesian harpooner.

It is perhaps in the manner of a literary Myers-Briggs test that Moby-Dick expresses the different ways in which these characters cope with life at sea. There is Ahab’s fervor; Starbuck’s gentlemanly work ethic; Queequeg’s fatalism (he builds his own coffin when he gets sick); Pip’s break with reality after a near-drowning turns him wilder than Ahab; Fedallah’s dark arts; Stubb’s practicality; and finally, the characteristic which most defines we literary types, Ismael’s deep and unsolvable ambiguity.

What some might call Melville’s point of view “slippage,” this reader takes as an insight into Ismael’s psyche. Like the giant squid from chapter 59, Ismael’s perception is tentacular, feeling around in many places at once but going mostly undetected by others. (That is, except for Queequeg, who identifies Ismael as omniscient from the beginning — the reason Queequeg asks him to unilaterally choose their whaling ship near the beginning of the book.)

But how can Ismael choose correctly when all perspectives assail him at once? Ismael’s between-the-story teaching voice is loud, but his character becomes increasingly thin, an out-of-body experience that intrudes into the private thoughts and conversations of the crew, most notably those of Captain Ahab.

For being psychologically agnostic, Ismael will suffer the ills of solitude as the only surviving member of the Pequod. It’s from this bitter end that the reader finally understands what all of his whale-cataloguing has been about. A shell-shocked reply from one who has seen the truth: That human endeavor is but pitching a harpoon at mother nature, and modernity, with its death-staving technologies, is little more than chasing a whale about the world.

Dorothy Reno is a senior review editor and columnist for the Washington Independent Review of Books. Her short fiction has been published in literary journals such as Prairie Fire, FREEFALL, and Red Tuque Books. She lives in Tbilisi, (former republic of) Georgia. If you would like to share your thoughts on Moby-Dick, please respond in the comments section of this article. Dorothy hopes you’ll join her in reading The Scarlet Letter, which will be the subject of her next column.