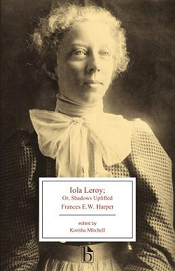 Unless you’ve gone out of your way to seek classic African American literature, perhaps taking courses at a university, chances are you haven’t heard of Iola Leroy: Or, Shadows Uplifted by Frances E.W. Harper.

I hadn’t heard of this 1892 story — the first novel by an African American woman — or its author either until a few years ago when I Googled “19th-century writers of color” to explore making my columns more diverse. I was aiming for sensitivity and due diligence but found a much-overlooked trove of personal and historical records, humor, and wisdom-writing that has been housed, rather suspiciously, off-canon.

Iola Leroy opens in North Carolina. Two slaves, Tom and Bob, speak to each other in code about the progress of the Union army as it presses south. When the troops arrive, Tom, Bob, and others plan to run away from the plantations and join forces with the North.

But first, a mission: Tom sees to the rescue of a newly enslaved young woman named Iola Leroy. Iola’s youth and attractiveness, along with her lack of work experience, alert Tom to his master’s shadowy motivations. Once free, a profoundly changed Iola is offered refuge at a Union hospital, where she works as a nurse while Bob (Robert) and Tom go off to fight the Civil War.

In time, these characters meet again. When Iola sees Tom a few years later, their roles are reversed, giving her the opportunity to help him through an important transition of his own. Later still, while nursing Robert back to health, Iola makes an astonishing discovery about his identity. This “come back around” cycle, which includes other joyful chance meetings, would seem to make up the “light” part in author Harper’s theme of shadows and light.

The notion of light, in the sense of elation, is unusual in a Civil War book. Particularly that Iola is born of “the Tragic Mulatta” tradition, which features doomed, mixed-race protagonists whose European appearance and certain deaths are geared to humanize the plight of slaves for a white readership.

Harper writes within this convention while also defying it, creating heroines and heroes who survive traumatic experiences and (mostly) go on to thrive. Iola, for instance, uses her shocking reversal of race and class (she grows up in wealth thinking she’s white) to find purpose in a life of community service, a vocation that would not have been available to her as a coddled woman on a plantation.

Likewise, the family reunions and cheeky conversations between friends and loved ones — Aunt Linda’s story of how she made her money selling pies to Union soldiers; another character’s admitting he now owns the house of his former overseer — are gentle rebellions against powerlessness, delivered up in a Trojan horse of amusing irony whose levity centers Iola Leroy on African American experiences and perceptions.

If Harper’s focus on the celebratory aspect of African American communities is a refreshing form of protest, it also softens readers for an intense encounter with the book’s darker material. These literary stones, as it were, sink deeper into the flesh: Aunt Linda getting her fingers whipped for teaching herself to read; Robert and his little sister being sold away from each other as children; and intimations of Iola’s exposure to sexual abuse — these ordeals get closer to the marrow than they would in a straightforward tragedy, where the reader knows to be girded.

Who is the woman behind this highly nuanced, political book? Born free (of a free mother), Frances Ellen Watkins was orphaned young and reared by a maternal uncle who was a preacher and an intellectual. It seems Harper’s uncle had a profound influence on her, because she excelled in her studies, later becoming the first female instructor at a seminary. By then, she’d already published her first collection of poems.

As she aged, Harper felt called to the antislavery movement. She visited several cities across the United States as a traveling lecturer; sometimes, it was rumored, she accompanied slaves on the Underground Railroad. At 36, she married a widowed single father named Fenton Harper. When he died only four years later, Harper continued to rear and support his three children (plus one of their own) under the considerable financial strain left by Fenton’s debts.

Harper, like Iola, used the downturns of life to strengthen her resolve in leading with principle, duty, and love. “Thoughts and purposes,” says Iola, “have come to me in the shadow I should never have learned in the sunshine.”

For the characters in Iola Leroy, shadows and light define their lives, while the shades in between make those lives remarkable. Nowhere is this more apparent than in the range and diversity of the characters’ ancestry, social class, and political views. In such a slim book, Harper created personalities more intricate and surprising than those we sometimes encounter in real life.

All of which makes me wonder: How might American culture have been shaped if the author who said, “We need more unselfishness, earnestness and integrity,” were more widely known and read?

Dorothy Reno is the classic-books columnist for the Independent. If you would like to share your impressions of Iola Leroy, we’d love to hear from you. You can join Dorothy in reading The Turn of the Screw, which will be the subject of her next column on February 22, 2021.