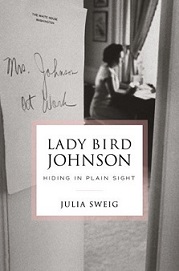 "Sometimes it’s hard to be a woman,
Givin’ all your love to just one man…
But if you love him, you’ll forgive him,
Even though he’s hard to understand…
Stand by your man."

In 1968, Tammy Wynette, “the First Lady of Country Music,” wrote and recorded “Stand by Your Man,” and it became her signature song for the rest of her career. Yet singing its lyrics hundreds of times over the next three decades somehow didn’t prevent her from divorcing four husbands.

Also in 1968, Lady Bird Johnson, the first lady of the United States, epitomized the song by the sustained commitment she gave to her “hard to understand” husband through 39 years of marriage, until his death in 1973. Julia Sweig’s solid new biography, Lady Bird Johnson: Hiding in Plain Sight, makes the case for her protagonist as being the ultimate presidential helpmate spouse, as well as a woman who quietly worked hard to make her country better than it was before she moved onto Pennsylvania Avenue.

Sweig definitely took on a challenge in seeking to go deep on what made her subject tick. While Lady Bird maintained a voluminous diary, gave speeches, wrote articles, and sat for interviews during her five-plus years as first lady, the author concedes on the book’s last page that Mrs. Johnson’s carefully chosen words about herself are mere “breadcrumbs” that she dropped along a concealed path that leads to a destination likely never to be found.

The book focuses almost entirely on the Johnsons’ White House years, with Sweig offering just enough of Lady Bird’s prior and subsequent life to frame into context her time in the spotlight between November 1963-January 1969. Thus, there’s limited mention of Lady Bird’s small-town East Texas upbringing, where she was reared by a highly successful father whose straw stirred the drink in their little neck of the woods. Her mother died when Lady Bird was only 5, which caused her to spend most of her formative years at home in the company of housekeepers, who gave young Claudia Taylor her lifelong avian nickname.

After high school, Lady Bird attended the University of Texas at Austin, majored in history and journalism, and graduated in the spring of 1934. She then took a sightseeing trip to Washington, DC, and, while there, met emerging fireball Lyndon Johnson, who was working as a legislative aide. Head-over-heels infatuated, he proposed on their first date. In his trademark approach to every situation in life, LBJ relentlessly pursued her, she soon acquiesced, and, on November 17th of that same year, they married.

In 1937, using Lady Bird’s money to finance his campaign, LBJ started his political run in the U.S. House of Representatives. Then, in 1948, he beat Coke Stevenson by 87 fraudulent votes to enter the Senate, rising to majority leader eight years later. During Lyndon’s 23 years at the Capitol, the Johnsons became wealthy as Lady Bird bought radio and television stations in Austin that they turned into money-making machines.

Knowing it makes little sense to compete against a Pulitzer-winning historian, Sweig wisely chooses not to plow the fertile ground covered in Robert Caro’s multi-volume biography of LBJ, which unforgettably details Johnson’s personal and political shenanigans, his years twisting arms and grabbing shirt collars as the “Master of the Senate,” and his misery while serving as John F. Kennedy’s vice president.

By November 22, 1963, when Johnson became president, Lady Bird had served as a full-time political wife for more than a quarter century, catering to her husband’s needs while weathering the storms of his extramarital affairs, mood swings, interpersonal manipulations, frequent socially unacceptable conduct, and almost fatal heart attack in 1955. She knew him inside and out, forgave his transgressions, and regardless of the emotional fallout over Kennedy’s death, was ready to maximize “our presidency,” demonstrating a drive to accomplish as first lady great things comparable to Eleanor Roosevelt’s.

President Johnson ran the West Wing, and Lady Bird ran the East. Both had press secretaries and agendas, and Lady Bird provided enough emotional support to keep her husband functioning as they worked at a frantic pace that caused LBJ to sweat through several shirts a day (while she managed to keep herself going on a steady diet of coffee and hardboiled eggs).

As husband and wife, they were the quintessential yin and yang. Lyndon was front and center; Lady Bird was “hiding in plain sight.” He never wanted to be alone; she reveled in rare moments of solitude. He was crude and rude; she was smooth and gracious. He read people; she read books. He was emotional; she possessed a “near Buddhist inner calm.” He struggled to make personal decisions; she could see what he needed to do and then nudge him to closure.

For the two of them, politics was “oxygen” — not surprising since they both liked being around people and were ambitious, shrewd, and fearless. Regardless of LBJ’s sexual escapades, they were ferociously committed to each other as marital and political partners, every bit as tightly interwoven as Ronald and Nancy Reagan, so much so that Lady Bird once stopped cooperating with a female biographer who failed to grasp that, in their marriage, “there is no way to separate us and our role in each other’s lives.”

In spite of how well they meshed, the Johnsons’ White House years were filled with heartburning anguish arising from the Kennedy assassination, the exploding Civil Rights movement, and the disastrous Vietnam War. The East Coast media never forgave LBJ for being from the state where JFK was shot and crucified him over his escalation of the war in Southeast Asia (despite his decisions having been guided by Kennedy’s own foreign policy advisors).

In addition, the press gave much less attention to Johnson’s unequaled success with Congress in pushing through the landmark Civil Rights, Voting Rights, and Fair Housing acts, and other Great Society legislation, as compared to the avalanche of criticism they threw at him as the person most responsible for the “sickness” in America triggered by the war and the urban race riots that had erupted all over the country.

The “morass” of Vietnam absolutely controlled the public’s perception of LBJ’s time in the Oval Office, as the president found himself in an unsolvable dilemma over whether to escalate or withdraw, which he articulated with this killer metaphor in June 1965:

“I have the choice to go in with great casualty lists or get out with total disgrace. It’s like being in an airplane and I have to choose between crashing the plane or jumping out, knowing I don’t have a parachute.”

The war caused Martin Luther King Jr., his legions of followers, and ultimately most of the Democratic Party to turn against LBJ and make the president’s and Lady Bird’s life a living hell, with protesters shouting at them wherever they went. As hysteria ramped up with each passing month, White House aide Jack Valenti lamented: “Never has one president done so much and ignited so few.”

Given how history has been kind to Johnson since his death — to the point that he’s now ranked as the nation’s 10th-greatest president in the most recent C-SPAN poll of historians and has been lionized in the last decade as second only to Abraham Lincoln in advancing the lives of African Americans — LBJ was right when he predicted during his waning months in the Oval Office: “If the American people don’t love me, their descendants will.”

Through it all, Lady Bird not only “stood by” her man; she advanced her own worthwhile projects: improving the natural environment around the country and pursuing urban renewal in DC (prior to its becoming a home-rule city) with a comprehensive agenda camouflaged by the buzz word “beautification,” a term pressed upon her that she loathed because it implied form over substance.

Furthermore, her well-crafted, diligently rehearsed speeches, filled with short sentences that provided the desired “pacing and drama,” made her an effective early advocate for women’s rights because she was never strident or cynical, but rather a force for purveying “optimism and a forward thrust.”

The most stunning revelation of Sweig’s book is found in the prologue. Lo and behold, in the “Hartland Strategy Memo,” Lady Bird wrote to her husband on May 13, 1964, while he was deciding whether to run for election in November and laid out their future: He should run for the presidency that year, serve one term, and then announce “in February or March 1968” that they were going home to Texas. Lyndon took her advice and fulfilled her prophecy.

Nothing about their White House years caused Lady Bird to waver from her plan. In fact, one of her projects as first lady was to move forward with the design of the LBJ Presidential Library, on which she planned to break ground in early 1969 and open in 1970. Such a timetable made sense only in the context of LBJ’s serving just one full term in the White House, yet for some unknown reason, no one connected the dots. When Johnson announced on March 31, 1968, that he would not seek a second term as president, the news shocked everyone except Lady Bird.

There are many important questions about Lady Bird Johnson unanswered by Sweig’s biography. How did she rationalize consistently prioritizing her husband over their daughters? Did she ever confront LBJ over his infidelities? Did she challenge her husband’s decision to escalate the war in Vietnam? Was she traumatized by the number of people killed because of his flawed foreign policy? Did LBJ’s dark side bother her, or was she 100 percent loyal to him no matter what? Was she satisfied by the caliber of advice her husband received from his inner circle? And how did she really feel about Martin Luther King Jr.?

Presumably, such questions are not answered by Sweig because they cannot be answered by anyone without engaging in rank speculation. The “breadcrumbs” regarding her inner thoughts that Lady Bird left for historians to chew on clearly lack the critical mass necessary to be assembled into anything close to a loaf.

Regardless, Lady Bird Johnson: Hiding in Plain Sight reveals the compelling story of the 50-50 partnership of a couple who genuinely attempted to enhance the quality of life for the many Americans of their era who faced uphill battles and depressing plights.

On every occasion during the Johnson presidency, Lady Bird pulled the laboring oar to keep their boat afloat amidst the stormy seas that arose from the sudden end of John and Jackie’s Camelot, the Domino Theory’s invalidation in Vietnam, and Civil Rights leaders’ running out of patience in their quest for racial equality in America.