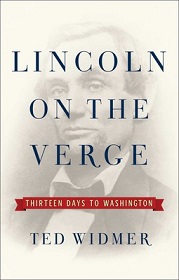 As the coronavirus drives the country toward a combined health and economic breaking point, those reviewing American history in search of an equally devastating time can look back eight score years and find it. Upon Abraham Lincoln’s election as president in November 1860, the nation moved so far past its breaking point that it broke in two, leading to the four-year Civil War that produced over 750,000 deaths.

With perfect timing, historian Ted Widmer’s Lincoln on the Verge: Thirteen Days to Washington arrives today and covers the four tumultuous months between Lincoln’s election and his inauguration in March 1861, with the thrust on the circuitous 1,900-mile odyssey he traveled, rather than take the straight-shot route to cover the 800 miles between Springfield, Illinois, and Washington, DC.

Over the course of that roundabout journey, he rode on 18 different rail lines; visited small towns, big cities, and five state capitals; and spoke (in the days before microphones) to at least a million Americans in 101 speeches. And he did it while operating under constant threat of assassination from several schemes devised by Southern scoundrels, who aspired to take over the nation’s capital before his swearing in.

To most people in the northern United States who encountered Lincoln on his February 1861 trip, the president-elect was a rapidly acquired taste. Yes, his “wild and wooly” appearance meant that he did not come out of central casting for what an American leader was supposed to look like — with his bushy hair, rumpled clothes, awkward gestures, twangy accent, and towering height.

But when the time came for someone to speak about the country’s past, present, and future, and the moral imperative of preventing slavery’s westward expansion, Lincoln answered the bell and usually threw a knockout punch.

Widmer uses a recurring one-word metaphor to describe the connection between the words that left Lincoln’s mouth and the souls who heard him: Electricity. Once he turned on his oratorical juice, Lincoln’s negative first impression melted like ice in a fire. Within a few minutes, after he “seemed to reach up into the clouds and take out the thunderbolts,” and then speak “with the precision of a surgeon and the feeling of a poet,” the needles in crowds’ moral compasses surged toward true north, while the tall, strange-featured man awakened “the better angels” of their nature.

How did a man with less than one year of formal schooling possess the power to access and deliver verbal thunderbolts, especially in the context of his 1860 victory, where “no one before him had ever been elected president from so far away, with so small a mandate, in a climate of such hatred”?

Widmer artfully lays out the factors that made Lincoln the most effective public speaker in American history, as he repeatedly demonstrated throughout his 13-day train ride. First, he had a one-two punch: He was not only well read, but, blessed with a photographic memory, he remembered what he read.

Growing up in poverty doing farm work that he despised, Lincoln found solace by reading every good book he could access, reading so much that neighbors wondered if he was “altogether right in his mind.” In particular, he devoured Shakespeare’s plays, the King James Bible, and history books (with a special fascination for George Washington and the creation of the Declaration of Independence).

Because he could remember so many passages, “few Americans read about American history with more passion or purpose.” Having highbrow knowledge readily available to enhance his rhetorical flair, he used it to maximum effect, guided by his conviction that “the point of history is not to blame people for their shortcomings, but to gain wisdom for the struggles to come.”

With that perspective, Lincoln took everything he knew about the history of the Declaration of Independence and used it to make his era’s most compelling arguments against the spread of slavery.

Second, he had a heightened sense of logic in structuring his political arguments that came, in large part, from his passion for Euclid. Widmer does a terrific job of explaining Lincoln’s genius for transferring the Greek mathematician’s key concepts into his tight speeches, as demonstrated by how he advocated his position on slavery: “If A. can prove, however conclusively, that he may of right enslave B. — why may not B. snatch the same argument, and prove equally, that he may enslave A.”

Once Lincoln began putting his logical train of thought into words, momentum built, and soon “it felt like watching a blacksmith forge a chain, link by link. It was irresistible.”

Third, Lincoln mastered the art of precision editing. In his early 20s, before becoming a lawyer, he worked as a surveyor and, thus, had a “surveyor’s exactitude with which he charted every word.” Having that commitment to precision, when writing his speeches, “he carved away what wasn’t needed…[and]…like any artist, worked to conceal the sculptor’s marks.”

He insisted on selecting the perfect words for every occasion because he knew how much they mattered. He once acknowledged the heightened power of his carefully chosen words when speaking to his law partner, William Herndon: “I may not emit ideas as rapidly as others, but when I do throw off a thought, it seems to me, though it comes with some effort, it has force enough to cut its own way and travel a greater distance.” The author concludes that Lincoln’s extraordinary oratorical skill allowed him to become the first president to use his elected position as a fully realized bully pulpit.

Widmer’s book is enhanced by several extra-mile features, including, but not limited to, the following:

Ted Widmer’s Lincoln on the Verge is quite simply as good as it gets in the art of writing biography. Besides his thorough research and fast-paced storytelling skills, the author’s deep insights into this tipping-point experience in Lincoln’s life as he traveled to meet his ultimate fate as president charged with the nation-on-his-shoulders responsibility of reuniting the states while acting as commander-in-chief during the most horrific war in American history makes for a saga to be savored.

Through this book, the reader can better understand not only the sights and spirit of this pivotal time, but more importantly the superhuman powers that made Lincoln our greatest president. In attempting to articulate his unique heroic stature that has allowed generations of Americans to develop a special bond with our 16th president over the last 160 years, perhaps Andrew Carnegie said it best: “I never met a man who so thoroughly made himself one with all men as Abraham Lincoln.”