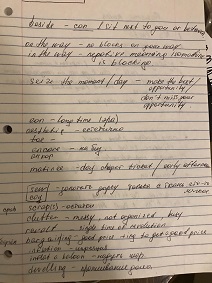 “Cuz we was all ridin' …right on the subway train…”


Last month, the weekend of St. Patrick’s Day, I traveled to New York to see “Nylon," a new play by my daughter, Sofia Alvarez. I arrived on Saturday, March 16, 2019. The day before, the celebrated American poet W.S. Merwin died at his home in Hawaii, age 91.

I was well aware of the former poet laureate and have several anthologies of his work. But like about half the authors in my collection — I’ll get around to all of them one of these days — I’d never read the native New Yorker.

But there, on the wall of the G train from Manhattan to Brooklyn, was a public-service poster of Merwin’s Remembering Summer:

“In between is the best because you never give it a thought/but it goes by too fast...”

The in-between is autumn — perhaps spring, the season right around the corner as I rode the train, a copy of The Moon and the Bonfires on my lap, Merwin on the wall of the rattling carriage. Or, because it is poetry, the in-between is our life on Earth.

Launched by the Poetry Society of America in 1992, the “Poetry in Motion” project provides lyricism on public transportation from Boise to Baltimore to the Bronx; art breaking up mattress ads and “If You See Something, Say Something” cautions the way the Baltimore Love Project gives pedestrians a break from booze and burger billboards.

I’d seen poems in public before, but Merwin was the first one I truly appreciated — reading it twice, slowly — in wake of the author’s death the day before: “...the sound of a bell from down there somewhere/I can sit here now still listening to it…”

Later, coming home from the play — a drama about the consequences of decisions made (or avoided) in youth — I rode a very crowded Saturday night Q-train. Amidst the drunks and headed-out-to-get-drunk revelers festooned in green, I overheard the folks in front of me talk about Baltimore.

Of course, I had to put in my two cents. How could I not, even though Healthy Holly had yet to jump from the pages of a children’s book onto the front page of local newspapers and prosecutors’ notepads?

After the standard Mobtown chitchat (crime, Orioles, crab cakes, and, oh yeah, crime), I was surprised to find that I was in conversation with City Councilman Kristerfer Burnett, whom I did not know.

Representing the southwest chunk of the city (where I went to Catholic high school), Burnett said that things were being put in place for improvement. I told him I was tired of waiting — that love for one’s hometown, even for a delusional romantic such as I, only goes so far. We shook hands, and he and his friends got off at the next stop.

Once they did, the woman sitting next to me turned and asked, in heavily accented English: “Are you in politics?”

In her early 30s, the woman appeared to be dressed for a conservative dinner party — too formal for the office, not dolled up enough for something fancy — and, to my provincial eyes, appeared to be Chinese. Her hair was cut short and dyed blonde, though you could tell that black was her natural color. In another suit of clothes, she could have been an Iggy Pop fan.

Her name was Cholpon Argy (I wrote it down, the subway car noisy) and she hailed from the Kyrgyz Republic, a former Soviet satellite along the ancient Silk Road between China and the Mediterranean.

“No,” she said in halting English, “Kyrgyzstan.”

“Aha,” I said, as if I knew the difference, ear as ignorant as the eye.

I told her I was a writer, and she said she was a lawyer in her home country and had saved for more than a year to live in New York to study English and sit for the Empire State bar. She’d already failed once because of difficulty with the language and, determined not to fail again, was eager to talk to strangers to improve her English.

(Unlike me, who talks to strangers as a way of poaching narrative, but mostly because I can’t help myself.)

Cholpon avoids hanging out with others in the Apple from Kyrgyzstan (how many can there be?) because it’s too easy to fall back on Russian and a dialect of Turkic, both official languages of her country.

So we yakked it up quite a bit in the short time we rode together. I talked about Elvis (“of course I know Elvis,” she said) and my children and the rowhouse I have turned into a library.

Remembering that I’d brought a book from the Macon Street “Nobel room” to give away — a marvel of which I own about eight copies — I took Love in the Time of Cholera from my canvas bag and gave it to her.

My first copy was given to me a quarter-century ago by a young woman who wrote out the 1985 novel’s opening sentence in a frontispiece salutation: “It was inevitable…”

After picking up other editions at yard sales and library clearances, I acquired a very nice edition — released by Everyman’s Library — on the set of the second season of “The Wire.”

It was part of the assassin Brother Mouzone’s moveable literary feast, and when the scene wrapped, I asked the prop master if I might have it. That copy went to another woman — a Magnolia State singer-songwriter I met near the village of Avalon on my way to the homestead of Mississippi John Hurt.

And this one — Spanish translated into English — went to a woman from Kyrgyzstan trying to master English in the land of Manhattoes belted Round by Wharves.

A week later, I received an email from Cholpon listing the words she has been looking up to better enjoy the story and get her tongue around the palabras of a maestro:

Is this the vocabulary to help an ambitious immigrant practice law in 21st-century America?

But I bet Merwin could make something beautiful out of it.

Sailing with the Greats