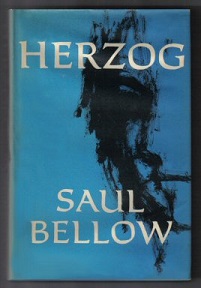 “If I am out of my mind, it's all right with me, thought Moses Herzog…”


I have just finished a manuscript based on more than a thousand long-buried World War II letters. They were written by a young wife raising a toddler and her soldier husband, a supply captain following the Allied front lines from D-Day through the fall of the Third Reich.

Both sides of the correspondence have been preserved and, thus, when discovered in the basement of an old Baltimore apartment house, could be synchronized to re-create long-ago conversations across thousands of miles.

The work was painstaking (1,400 letters, each several to many pages long); illuminating (great swaths of the Belgian countryside had yet to recover from the First World War when GIs passed through to liberate Brussels); and very rewarding, a ticket to time travel in tattered envelopes.

One chapter of the book is devoted to the way mail once dominated the culture. Stationery was a popular holiday gift and free (both envelope and paper) at hotels, often embossed with deco logos. Colorful stamps, just a few pennies, had to cross your tongue to adhere to the envelope. And distinct handwriting (whether elegant Palmer or the scratch of Flannery’s fowl) covered un-lined pages. Until April of 1950, mail was delivered to U.S. residences twice a day.

Herzog, the title character of the 1964 Saul Bellow novel that turned its author into a superstar, tells much of his story through letters (never mailed) in the immediate wake of the JFK assassination and the Beatles on Sullivan; back when letter writing was customary, not quaint.

(How quaint has genuine communication by handwritten missive become? There are now letter-writing “workshops” to instruct and encourage people to put pen to paper and stamp on envelope, a sibling enterprise to labors like those at Philly Typewriter, which sells, repairs, and celebrates la máquina de escribir en todo su esplendor.)

Herzog, a historian of the Romantic Movement and a bit of a sad-sack academic in his early 40s, bounces between beds and books, the Berkshires and Broadway, with a paperback of poems by Blake in his satchel. In his letters — addressed to a constellation of people both alive and dead, public and private — Herzog strives to settle scores, asks forgiveness, and angles for the last word.

Herzog would be wise to accept a verity Bellow embedded in a later novel: “Sometimes the truth will hitch a short ride with your finest lies…” But as he announces in the novel’s opening sentences, he’s more than a little cracked.

From chapter to chapter, an entire day passes while Herzog is writing letters, the world passing by Moses and his problems (ex-wives and mistresses, young children to support both financially and emotionally when he makes time to show up) as he tries to sort it out with ink on bleached pulp. Some scholars have noted that Herzog’s letters — reproduced whole and, in part, in italics, at times tedious — are the key symbol of the story, more of a diary than a missive.

My favorite non-recipient of a Herzog letter is Nachman, a childhood friend whom Herzog sees on the streets of New York “in a beatnik cap...there, suddenly was Herzog’s childhood playmate. A heavy nose, hair white, thick unclean glasses. The stooped poet took one look at Moses and ran away.”

Through Nachman and memories of their shared youth on Napoleon Street in the Jewish ghetto of Montreal (the city of Bellow’s birth) come passages far more moving than Herzog’s musings on his sexual (he’s been cuckolded by his best friend) and intellectual angst. Bellow’s writing in revisiting those slums (the author’s word), is the best in the book.

“Their dry turds crumbled in the darkness with a spicy odor. Reb Shika had a yellow color, Mongolian, a tiny handsome man. He wore a black satin skullcap, a beard like Lenin's. His narrow chest was clad in a winter undershirt-Penman's woolens. The Bible lay open on the coarse table cover. Moses clearly saw the Hebrew characters — dmai ochicho-the blood of thy brother. Yes, that was it. God speaking to Cain. Thy brother's blood cries out to me from the earth…”

I visit the post office and various street-corner mailboxes about three times a week, no matter where in the world I happen to be. (Beware of the postal service in Italy, it has failed me numerous times; long letters written over espresso, properly stamped, dropped in the proper box and never delivered to confidantes back in the States.)

I stand in line to buy stamps (self-stick, seldom our nation’s statesmen these days, more frequently toys and cartoons, apt for our epoch) and mail letters to correspondents as far-flung as the olive groves of Greece, a street named Myrtle near what was once Ebbets Field; and, believe it or not, a very short artery in Chattanooga named Money Tree Lane.

If Pittsburgh had not demolished “Dream Street” — made famous by W. Eugene Smith in the days when mail was still delivered twice a day — I’d write a letter to someone there. I’ve been obsessed with the mail since the fourth grade, when our teacher told us that if we wrote to the embassies of different countries in Washington, they’d send us cool stuff. From the embassy of Norway, I received a map and a can of sardines and I was hooked. Not all of the people who receive my notes and collages, however, are as faithful as the good Norwegians were.

Soon, without fail, I’ll be writing to someone, I’m not sure yet just whom, about Herzog, the letters that drive the story and the prose.

On my idiosyncratic stationery, often the backs of drugstore-developed snapshots I take with disposable cameras, I will copy out passages from the novel, just to feel (as Hunter Thompson typed out the whole of Gatsby as a young man) the power of Bellow’s gift.

The words will be of Nachman and his becursed sweetheart, Laura, a young woman who loved books — especially by the French — more than life.

Says Herzog, in effect writing to himself about a memory disguised as a letter to Nachman, Laura was a “slender, thin-legged girl with the dark brows that rose high and recurved again beside her eyes, and the wide mouth which curved down at the corners — she had committed suicide, and Nachman ran away because (who could blame him) he would have had to tell [Herzog] all about it.

“Poor thing, poor thing — she too must be in the cemetery.”