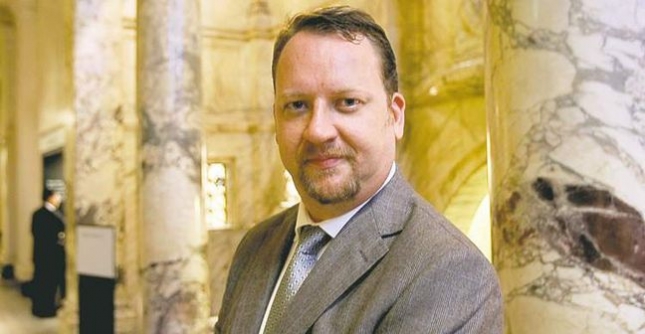 Philip Hensher’s book The Northern Clemency was short-listed for the Man Booker Prize. His latest novel, Scenes From Early Life, captures the “collective memory of a family and country.”  The novel, which is a fictionalized memoir based on the life of Philip Hensher’s husband, is at once a coming-of-age novel and a history of the civil war in Pakistan.

Philip Michael Hensher is an English novelist, critic and journalist. He was the youngest author included in the Oxford Book of English Short Stories, edited by A.S. Byatt.

You write from the perspective of a Bangladeshi boy, based on the life of your husband, with such detail and richness of description. What was your creative process?

I talked to Zaved about episodes in his life, many of which were stories he’d told me before, and asked a lot of detailed questions about the texture of life as he remembered it — furniture, clothes, habits, food, that sort of thing. There was also a lot of use of my own experience of Bangladesh, though of course it’s changed an enormous amount between Zaved’s childhood and the time when I got to know it. I made a huge quantity of notes and then wrote each morning in a disciplined way. Occasionally, I needed to make sure I knew what the real larger history of the war was, and I read a good amount of first-person memoirs, Bengali fiction, what observations from the time I could find and so on, and I talked to other Bengali friends about their experiences of that time. I tried to anchor as much as possible within one voice, however.

How involved was your husband in the creative process? How were your narrative choices shaped by that — for example, as we are pulled out of Saadi’s voice to reveal that this is, in fact, a story being told to a third party?

He fed me a lot of memory, and when I was near the end he read what I had written and made a lot of suggestions for changes. In the middle, he didn’t see what I was doing, and I tried not to be influenced by him in the creative process in the sense that he didn’t tell me what to put in and leave out. He would have written a very different book.

What was your decision-making process for photo selection and inclusion?

They were just my photographs from trips to Bangladesh. I’ve always wanted to have illustrations to a novel, and it was always nixed on the grounds of expense. So this time I thought I would argue that not many English people knew from firsthand what Bangladesh looked like, so perhaps we should give them a clue. They are quite remote and timeless images. Also, three of the photographs in the book are of houses that are still standing that play an important part in the narrative.

Do you consider Scenes From Early Life politically motivated? Why or why not?

Yes, of course. One of the things that drove me is that the episode is one of the worst and most brutal genocides of the 20th century. The number of Bengalis murdered may exceed the numbers of dead in Rwanda. You couldn’t write about the history of this country and not feel some political motivation. The single thing I wanted this book to achieve, in an ideal world, is to add to the swelling movement to bring perpetrators of genocide and their collaborators to trial, 40 years on. Pakistan has never accepted responsibility for the hundreds of thousands of murdered Bengalis.

The only people being tried, even now, are Bengali collaborators in Bangladesh. The war criminals sheltering in the West should face trial. I didn’t write any of that as a demand. I just wanted people to think about the situation.

Early in the book, the children connect to the mini-series “Roots” and play the characters in it for weeks. How does that relate or not relate to the civil war that occurred in 1971?

I don’t know. That’s the sort of calculation that novelists don’t make, and ingenious critics should. I suppose I wanted to show how the aftermath of the war dripped into everything afterward, even small children playing a game.

While set against the backdrop of war, in many ways Scenes From Early Life does not directly address it. Why did you make this choice?

Because hardly anyone experiences a war. You only experience what the war thrusts into your purview. I only ever write about intimate experiences here. I wrote a book once about a whole war, though it was a tiny one, and found the task of writing about tactics and issues quite destructive to novelistic texture, unless you kept an eye on it. There is also the point that Burke makes in his essay on the sublime and beautiful, that when the eye only glimpses a small part of a whole and has to reconstruct the larger mass from its own powers of imagination, the effect of the unseen whole is the greater. You just see in the book how the murder of up to 3 million people affected one family and two musicians, and start to wonder, I hope.

Scenes From Early Life is a rare glimpse into the upper- and middle-class characters in the 1970s in Bangladesh. Although men are main characters, much of the color of the plot seems to pivot on the aunties. How did women shape Saadi and his future choices?

Well, if you know Bangladesh at all, you’ll know that powerful and vocal women are a very important part of its culture. You wouldn’t want to argue with a Bengali woman making a point. I saw a similar connection here with my home country of Yorkshire, which similarly has an “official” culture of machismo and strong men, but is full of, and largely run by, no-nonsense women with a clear idea of where they want to go and what they want everyone else to do on their behalf. I love women like that.

Even as the book ends, the reader has an overwhelming sense of the comforts of home and food and rich smells. How do you want your readers to feel as they leave the pages of the story?

Happy and hopeful and amused, and with a bit of a yen to go to this marvelous part of the world, if they haven’t already been there.

Ann Canela is a published poet and a founding member of the 12 Gauge Brooklyn Writing Group.  Her work has been featured in literary journals and online publications. She graduated from Hunter College in New York City and is currently a marketing and fundraising consultant in Washington, D.C. Twitter: @ann_canela

The journalist’s new collection shines a light on “hidden Maryland.”