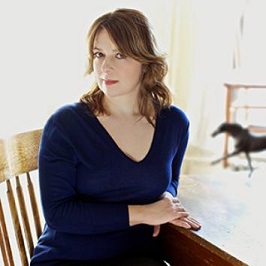 Deep in the heart of Texas, a storm pushes up a long-hidden container of chemicals buried on a tract of land that, a decade ago, was known as Rosemont. By now, most people have forgotten the illnesses the toxins caused, but not Lee Knowles.

Still haunted by her daughter’s death from a blood disease — which she blames on the chemicals — Knowles protests when a developer plans to build a new subdivision atop Rosemont. As the scars left by the earlier disaster are brought to light once again, a violent crime rocks the community. Both stories unfold and intertwine in the powerful novel Friendswood, by René Steinke, a starkly realistic work with an unsettling poetic quality.

Is the plot of Friendswood based on a real-life happening, or is this something entirely from your imagination?

I imagined all of the characters and the story itself, but Friendswood is the town where I grew up, and there was a neighborhood just outside of town, which, like the fictional Rosemont, had to be demolished because it had been built so near land that had been contaminated by an old oil refinery. Houses were literally bulldozed. The Rosemont part of the novel is very loosely inspired by this real event, and also inspired by similar environmental catastrophes around the country. But I'm mainly concerned with the personal lives of characters in the aftermath of this event. What does it feel like to stand on the crumbled remains of your home after it was bulldozed? How do you find a sense of safety after you've been through a catastrophe like this, especially if you now live just a few miles away? Or what does it do to you if you ignore what happened or try to forget it? There's a way in which the feeling of the landscape affects every single character in a different way.

The novel includes a number of vivid peripheral characters — Willa’s friend Dani, Hal’s former lover Dawn, Lee’s best friend, Rush, and Dex’s mother, among others — whose inner workings you never delve into, but who nevertheless stick strongly in the reader’s mind. How did you decide which characters you would follow and which you would not?

It's important for me to make even minor characters feel original and alive. The four central characters came to me early on, I'm not sure why. Somehow, each of them interested me in a different way — Hal's slangy Texas phrasing, Willa's perceptiveness and her visions, Lee's obsessive thinking, Dex's attempts to understand things. I needed multiple characters to tell this story with the complexity and breadth that I wanted, but I'm always most interested in my characters' interiors, and that's why each has his or her own discreet section.

The characters display a range of reactions to the chemicals in Banes Field, from Lee’s obsessive crusade to have them acknowledged and destroyed to Hal’s flat refusal to believe anything might be wrong. How much do you think the characters’ “beliefs” are driven by facts, and how much by their emotions?

Well, Lee and Hal interpret the facts differently, and then, as things usually go, their emotions get tangled up with what they think they know. I wanted to explore those dissonant understandings of the same event. Each of them, in his or her way, is trying to do the ethical thing, but for both of them, that causes heartbreak.

A person remembers one story and not another for all kinds of individual, emotional reasons, I suppose, and then there are those collective stories (like the Alamo) which seem to represent the way a culture wants to see itself.

I've always been fascinated by the way Texas embraces its history. If you grow up in Texas, you learn a lot about the state's history in school, and the stories are epic and memorable. The story of the Alamo is so rich, partly because it's a literal defeat that Texans have somehow turned into a psychological victory. And the Alamo was originally a Catholic mission, a place of worship, essentially, that then became a military fortress — that part of the iconography also interests me. What does it mean to turn a church into a battlefield? And then there's all these wonderful personalities and legends involved in the battle itself — it's a really engaging story.

On the other hand, I think it's hard for most people to focus on events like what happened to Rosemont — anxiety about the environment can feel so overwhelming — and I wanted to interrogate that a little bit. When it comes to toxins in the environment, it's often difficult to get a handle on the facts, and I think most people just feel there's nothing anyone can do about it, and it's too much to bear. What happens in the Friendswood of the novel happens all around America. Usually, we see some crisis in the news for a few months, and then it's forgotten. What happens to the people who still live in these places? How do they come to terms with what happened?

Willa thinks about Emily Dickinson at one point, “The meanings of the poems seemed to move as soon as she thought she’d found them,” which could also be said of the visions she has and of the imagery you use throughout the book. This stands in contrast to a lot of modernist literature or more “traditional” symbolism, where the images that appear in a work mean one single thing. Do you have fixed meanings for images in your mind as you shape your story?

In the novel, Willa is thinking about her interpretations of the poems in contrast to the way her minister talks about interpreting scripture — he wants her to interpret the very mysterious and poetic text of Revelation as "fact," and she can't come to terms with that.

My favorite modernist writer is probably Virginia Woolf, and right now, I happen to be teaching To the Lighthouse. I've read this novel many times, and I find that I interpret the imagery differently each time. And even within the novel, the image of the lighthouse at one point seems to represent artistic vision and at another point joy, and at another point memory, or family, and a number of other things. If an image is resonant, it can have several meanings at once. The most powerful images in literature, for me, don't have fixed, single meanings. That's one reason why I love poetry.

When I write, the imagery comes about organically, very much through my engagement with the character, and not through any intended fixed meaning. I wanted Willa's visions to remain mysterious so they'd retain their power. I also wanted readers to have a certain amount of freedom in how they read those beasts. Although the visions don't represent any single thing, they are obviously entangled with images from the book of Revelation, which some people have interpreted rather narrowly, and I wanted to kind of write against that.

A strong sense of punishment dogs many of your characters. Do you see this as particular to the community of Friendswood you created, or is it a characteristic of broader American society?

One of the reasons I loved writing about a small town is that it feels like a democracy in miniature. I wanted the novel to ask questions about punishment and forgiveness, and I hope that opens up some conversation.

In the narrative surrounding Willa, you face the difficulty of writing about a terrible crime without necessarily making those involved in it into monsters. How did you approach this task? Was it important to you to show the different effects of that crime on both the perpetrator and the victim?

Yes, absolutely. I think it's essential to find the humanity in any character you write, no matter what they do. I also very much wanted to show the repercussions of this sexual assault on the larger community, to figure out the forces that put the assault into motion, and to find whatever small chance there might be for some kind of recovery.

I worked very hard to imagine these characters with all the texture and idiosyncrasy of their daily lives. That moment, for instance, when Cully tries to confide in his father in the car in the oil fields, and Hal won't let him. Or the incident when Willa tries to explain what she thinks the beasts mean to her pastor, and he interprets this as arrogance. Or the final scene with Willa and Lee, when it's Lee who feels responsibility for helping Willa to recover, even though she doesn't know Willa very well. I'm interested in the mysterious connections between people and how they manifest themselves in a crisis.

Sarah Vogelsong is a writer and editor from Richmond, VA. Her work has appeared in Style Weekly, the Neworld Review, and Hometown Junket.