One of Africa’s most accomplished writers, Ngugi Wa Thiong’o has taught at Nairobi, Northwestern and Yale Universities and at Amherst College. He is a distinguished professor of English and comparative literature at the University of California at Irvine and an honorary member of the American Academy of Letters. 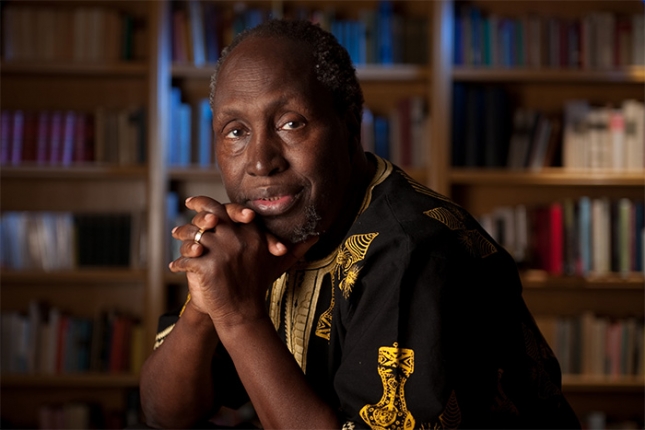 Kenyan novelist, playwright and essayist Ngugi wa Thiong’o’s two riveting autobiographies offer a view of Kenya under colonialism, from the perspective of a child in the first, Dreams in the Time of War: A Childhood Memoir, and from that of a teenager in the second, In the House of the Interpreter, A Memoir. They both explore the oppression and the two-ness of being both Kenyan and British, admiring and exploring the wider, literate culture of Britain but more and more horrified by the injustice and inequality of that culture.

In both Dreams in a Time of War and In the House of the Interpreter you describe how it felt to grow up in Kenya under British rule. There are many ways to do a memoir. W.G. Sebald’s The Rings of Saturn is almost dream-like, with its old photos and hypotactical syntax. Did you take the child’s matter-of-fact point of view as a way to exacerbate the horror of colonialism and British oppression?

In Dreams in a Time of War, I take the viewpoint of a child growing up. Memories of the first impact of things are clear as images. I adopt a kind of stream-of-consciousness, as if I am experiencing things in the present. But it is the present of a past. In the second memoir, I adopt the more distancing stance of a past tense, and then that of an unfolding present. In both, I am writing about myself and my experience, or rather, my memory of the experience of the Kenya history, in the everyday sense.

Particularly striking in Dreams in a Time of War is the comity among your four mothers.  Even the idea of describing them as “our mothers” is startling to many Western readers because the idea of multiple wives living in harmony and mutual respect is alien. Was this kind of accord common in traditional Kikuyu families or is the arrangement an example of polygamy that just happened to work?

A polygamous family means just that: you are a family that is rooted in many mothers and one husband. The family sense was enhanced by the fact that we lived in the same space. There were, of course, four huts, and each of us was identified with one mother. But we shared the yard. Life was lived more in the open than inside the huts. The hut was where you went to sleep. But the yard was where we all met. I suspect that for us children it was paradise; you did not have to go out to look for playmates, and any of the mothers could feed us when we were hungry. For our mothers, of course, polygamy may have played out differently, as I have tried to explain in Dreams in a Time of War. Not every family was polygamous. The more property one had by way of land, goats and cattle, the more likely that one would marry an extra wife. Today’s polygamy is less a family; it’s more like separate units joined together by their links to one man. Sembene Ousmane calls it geographic polygamy. It’s more akin to families of divorced parents in the West who marry again and again. Linear polygamy.

Did your father’s ability to care for his family add to the harmony and did his inability, after losing his land and livestock, undermine that harmony? Or were there signs of strain before his loss of economic sovereignty? Do you see any parallels with the demise of your traditional culture and impact on the black community in the United States as a result of slavery? The same kind of brutal suppression of a people?

In a traditional polygamy, each woman is the sovereign ruler of her household economy. Each mother is basically independent, self-sufficient; she disposes the produce of her labor anyway she wants. The man has control over his economic sphere. There are always strains when more than one person lives in the same compound, but there are moments of cooperation. In my case, my father’s loss of his own independence made him dependent, but in a patriarchy. He crossed boundaries by wanting to control that which he had not had a hand in producing. The family of enslaved Africans was deliberately broken by the slave master. It’s a different kind of loss.

If indigenous Kenyan culture had subsumed that of the British, what impact do you think it would have had on present-day Kenya?

It could not have happened in a situation of the colonizer and colonized. The dominant social force always tries to impose its culture on the dominated.

Few African writers of your generation who lived through colonialism and post-colonialism live in their home countries and write about where they now reside. Is it the fate of the exiled artist, as Iranian-French photojournalist Reza Deghat writes, to always have “a feeling of mourning for your native land” regardless of the freedom a new country may offer. Are your memoirs a mourning for your native country?

I would describe it as longing — longing for home. Reach out for home. I suppose in time it may become the ideal home, the platonic home so to speak, and everyday you reach out but never able to own it, so you try again.

Few American writers write as lyrically as you do about the joy of learning or the mental expansion that education brings — the magic opening up to other worlds and other cultures, but also the loss of what came before. Do you think your feeling would have been the same if the same education had been available in Kikuyu? Is that behind your retaking your original name and writing in Kikuyu and then translating your books into English —a way of synthesizing the colonial and indigenous experience?  Do you think you’ve accomplished it?

The normal cognitive process is to start with what, where and how you are, and then add to it, integrate the outside into self. Colonialism breaks that process; it normalizes the abnormal. It tries to make its victims integrate to the outside of themselves. I would rather start with my language, whatever it is, and then add other languages to my linguistic arsenal. But colonialism wants you to start with the colonizers language, and even forget your own in the process.  Mine is a struggle to free the normal from the abnormal so that African languages can relate to each other and to other languages and cultures on the egalitarian and democratic terrain of give and take. I reject the hierarchy of languages and cultures and embrace networking of languages and cultures.

So much now, language is described as a framework for thinking, a sort of construct of how one sees the world.  How different is the way you see the world in Kikuyu from the way that you see it in English? Do you have to struggle to find the words? Are you always your own translator?

We see the same world. But each language has a musicality unique to itself. I struggle to find words, whether I am writing in English or Gĩgĩkũyũ or Kiswahili. I have translated some of my books into English. Dr. Wangui Goro has done some others.

In which language do you think most often?

It depends on the situation. I am currently distinguished professor of English and comparative literature at the University of California at Irvine. I have been an English professor all my working life. The books I read on regular basis are nearly all in English. There are very few books in Gĩgĩkũyũ.

Much writing seems to be coming from Africa these days, from long-known writers to debut authors. Why now? Is there a convergence of events? Or is it just the coincidence of writers finding and using their own unique voices?

The term post-colonial is problematic as periodization or as a description. There is no genre called post-colonial. I have talked about it fairly extensively in my book Globalectics. I look forward to next year when novels by some of my children are published. Mukoma wa Ngugi has already published Nairobi Heat, with Melville publishers.  His second novel comes out later this year. And my daughter, Wanjikũ wa Ngũgĩ, will have her debut novel published by Simon & Schuster later this year or early next year. Nducu wa Ngugi has a novel coming out with East African Educational Publishers. So you see, I have a lot waiting for me within my family. But really what the younger generation are producing from all parts of the continent is exciting, something I welcome as a reader, teacher and, of course, fellow writer.

How different was the collaborative experience writing a play with Micere Githae Mugo? Would you do it again?

It was great experience, a mission really. I think both of us are proud to have rescued the memory of Dedan Kimathi and the Mau Mau Resistance from what then, the early 60s, looked like an official attempt to bury it, through silence.

Do the waves of students that you teach each year make you optimistic about the future? Why or why not?

Life is like a relay race. We pass on the baton of our experience to others; these others will pass it to others. That’s the beauty of teaching in general, literature in particular.

What is next for you?

I am still working on my memoirs.

Karen DeWitt was a journalist for many years and for the last decade has been a senior communications professional for nonprofit organizations. She covered the White House and national politics for The New York Times; foreign affairs and the White House for USA TODAY; and was a senior producer for ABC’s Nightline.