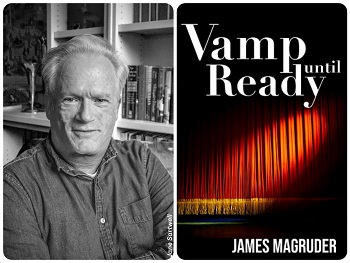 You might call James Magruder a quadruple threat. Not only can he sing, dance, and act; he can also write, capably and hysterically, the playbill. The author of multiple titles, including 2014’s Let Me See It, Magruder, a playwright himself, now finds his métier in Ithaca, New York, following the lives of a bunch of townies in a collection of linked stories.

His new Vamp Until Ready begins life with Cary Dunkler, the underachieving foster brother of Dave, who has recently graduated from a full ride at Cornell and is sure to continue his charmed life. Dave convinces Cary to audition for a local theater company's production of “Damn Yankees,” and...scene!

The rest of the book jumps around in time and focuses on Kristy, a minor character, and Isa, her babysitter, another actress who not only steals the hearts of Kristy's kids but also who becomes involved with Kristy's bum of an ex-husband. The book then jumps again to follow two more minor characters before circling back to Cary in the final section. Throughout, Magruder's gimlet yet sympathetic eye and razzle-dazzle dialogue make the characters come to life as they sing their hearts out until the final curtain.

And now, on with the show.

I grew up on musicals but never appeared in any (unless you count singing in the chorus in my high school's production of “Oklahoma!”). What about you? Ever chew up the scenery?

My parents had the original cast recordings of “Irma La Douce,” “Fiddler on the Roof,” and “Man of La Mancha.” I listened to them a lot as a boy but can date the birth of my obsession with musicals to the 18th of April 1976, the night “A Chorus Line” swept the Tony Awards on ABC Television. What happens next is the subject of my first novel, Sugarless. In high school, I was in the chorus of “How to Succeed in Business Without Really Trying” and “The Music Man,” did a cartwheel as Motel the Tailor in Fiddler, and sang “We Beseech Thee” in “Godspell.” At Cornell, I played Claude in “Hair” and the Padre in a production of “Man of La Mancha” that never opened because the actor playing Don Quixote had a mental breakdown. “Hair” was probably my favorite, not only because Claude was a big, fat part, but also because I was having a wonderful showmance with the actor playing Woof, still a good friend after 41 years.

What was behind your decision to set the story in the 1980s?

My actual lived life. My fiction has always been very autobiographical. One thing that I’m proud of with Vamp Until Ready is that I’ve completely invented three of the five main characters, and all of them are heterosexual. My post-80s life in the theater has been dramaturgy, playwriting, and criticism. In writing Vamp, I remembered how much fun it was to just dance in the chorus. I’d forgotten that sense of play and youth.

The book is in five parts, with a minor character from the first part taking center stage in the last. It reminded me of what Elizabeth Strout does in her stories.

Vamp was initially conceived as four novellas linked by Ithaca and the Hangar Theatre. The last one was supposed to be from the point of view of Leigh Bailey, the Cornell professor who legally adopts Dave. By the time I finished the third part, Leigh took a back seat to Mark Shinner, the lonely, well-meaning straight man who had gained my sympathy. When the four novellas were done, my friend (and dedicatee) Kennie Pressman read them and idly remarked that he was hoping he would get to hear from Cary Dunkler (part one) again. A light bulb went off, and I wrote part five swiftly, attempting to knit all five together. I’ve been unfairly avoiding Strout’s Olive Kittredge books all these years but will make amends to her now.

In part three, which is, I think, the most complex and serious section (although the name “Mango Roses” cracked me up), you have Judy visit a juju, or healer, so she can write it into a play. Did you also have an experience where you witnessed a similar event, notebook in hand?

My husband, Steve, and I spent 10 months in Kampala, Uganda, starting in June 2013. He retired this July from Johns Hopkins after 16 years as a neonatal research nurse, working in East Africa to prevent HIV transmission from mothers to infants during breastfeeding. They’ve had astounding success. I went with him thinking one could do anything for a year, even at 52. I was wrong on many counts. Let’s just say I was a gibbering, mental wreck when Hopkins commanded us to come home in April 2014 after the Ugandan government passed a “kill the gays” bill. Inventing Judy and her story was a way for me to reclaim some of the positive experiences I’d had in Kampala, which included writing the book for the cockamamie “Mango Roses” musical with two high school girls. A composer and a lyricist from Manhattan had been dragooned into writing the score. The two of them, myself, and the deluded producer (“Emil”) took boda-bodas to the outskirts of the city to visit a juju for song and lyric research. That particular scene in Vamp Until Ready — antelope hide and all — comes directly from the journal I kept that year.

An Interview with Joel Fishbane

The author talks history, height, and moving past guilt.