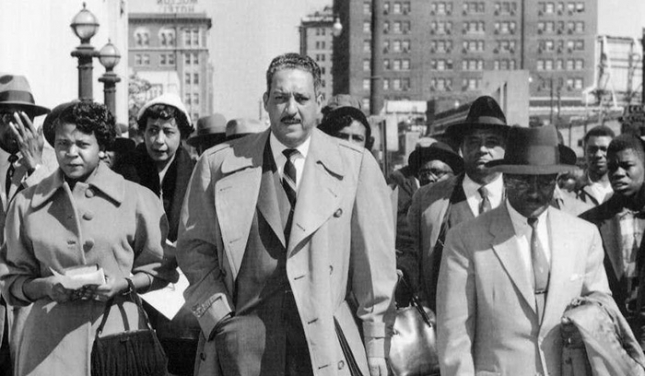 Larry Gibson’s Young Thurgood, The Making of a Supreme Court Justice is filled with wonderful details about black Baltimore and the legal community that molded Judge Marshall. Few details are left out. Gibson manages to tell Marshall’s very human story without losing a sense of his greatness. Thurgood Marshall changed the nation’s legal landscape by challenging the system of racial segregation, winning 29 of 32 arguments before the United States Supreme Court.

Larry Gibson is a professor of law at the University of Maryland Francis King Carey School of Law in Baltimore.

I found your book to be both informative and challenging. There are several points throughout the book where one might interpret you as suggesting we see Marshall as plainly human. This is most evident in your discussion of Marshall’s youth. However, you also soft-peddle or apologize for Marshall’s behavior in situations one might understand as purely human and, yes, youthful reactions to racially charged situations, like the fights between black and white youths on the streets of “Old West Baltimore.”

The book reports, without apology or minimization, any faults of Marshall that the research uncovered. For example, the book describes at least five occasions when Marshall was less than candid and occasions when he was unfairly critical of others. The brief mention of his childhood fights with neighborhood boys contains all that could be learned about those encounters.

Do you think that Marshall, like many black youths of his era, might have regarded the relationship with white youths more in terms of competition rather than of friendships?

Undoubtedly, Marshall’s encounters with white youths in his neighborhood involved elements of friendship and competition. That would be typical of groups of youngsters in any neighborhood, especially when they attend different schools.

How did his views of racism and his own beliefs about himself change with age?

I looked for but could not detect any major shift in Marshall’s attitude about race during his formative years. From his youth, Marshall seemed to evaluate people on an individual rather than a racial basis. Perhaps it was because he grew up in a racially mixed neighborhood and had so many positive contacts with white people.

One of the most important comments in your book is one made by Cyrus Marshall Jr. He states that “in those days a group of dedicated teachers who knew everybody, knew all the children just about. That extra knowledge and concern was to [the children’s] benefit.” The importance of this statement appears vital to our understanding of current pedagogy and its failings, particularly in the majority black school systems of the 21st century. In your opinion, why were the teachers of Marshall’s era more successful with the students in Marshall’s community? Moreover, why are the teachers of this pre-integration described as more caring?

There were at least two main reasons that the teachers in the black schools took such nurturing attitudes. First, the teachers were well educated and the largest professional group in the African-American community. Second, the students were the children of the teachers’ neighbors and friends. Marshall’s parents probably knew personally most of his teachers, who lived within a six-block radius of Marshall’s home.

Marshall is a respected leader and important part of American and Black History. The reader recognizes that you have the uneasy task of describing less than admirable moments in Marshall’s youth. One instance is Marshall’s application to Lincoln University. He responds to the question “What church do you attend” with an obviously false answer. You comment very little on this incident.

Marshall incorrectly stated on his college application that he was a Presbyterian. The book reports this matter, shows an image of the application, explains that it was false and suggests a reason for the misrepresentation. The book also reports other instances when Marshall may have been untruthful, such as the inaccurate date of birth on his B&O railroad employment records and the semester when he took off from college to work when he was supposedly ill.  The book makes no effort to minimize or to exaggerate these occurrences. They are placed in context with the other events.

To readers like me, you write in an almost apologetic tone about Marshall’s behavior. Similarly, you write of Marshall’s role in hazing in much the same way. Why did you take this tack?

The books put into perspective a college hazing incident that is greatly exaggerated in earlier biographies. Reading earlier accounts of Marshall, one would get the false impression that he had repeated disciplinary problems in college. An image emerged of Marshall as a prankster prone to get into trouble. One biographer even claimed that Marshall had been repeatedly suspended from college for pranks.

That impression is false and not consistent with the primary written sources or the recollections of persons with direct knowledge. In fact, Thurgood Marshall was a rather serious and orderly young person. His only disciplinary incident occurred when Marshall and 21 other sophomores at Lincoln University were suspended for hazing freshmen, in an incident where Marshall was mainly a spectator.

Do you think that his early indiscretions would matter to the current reader?

These indiscretions are reported in the book because they show Marshall’s human side.

Is it always difficult in biography to select what to put in, what to leave out?

Fortunately, I was able to put in the book very significant facts that could be verified about Marshall’s first 30 years.

Were you in any way swayed one way or another by his reputation?

One of my motivations for writing the book was to correct misimpressions that had become repeated elements of Marshall’s reputation. For example, Marshall had developed a reputation for being a far less serious young person than he was actually. Furthermore, he did not learn the U.S. Constitution in his elementary school basement while being punished for repeated infractions. He did not go to college intending to be a dentist. He did not apply for admission to the University of Maryland law school. He did not open his law practice in a rundown unattractive office. There are sufficient interesting and verifiable facts about Marshall without myths that needed to be cleared away.

After reading your book, one can walk away with the impression that Marshall was merely a lynchpin for a broader discussion about Baltimore’s black legal elite and the challenges and successes of that community’s professionals. While writing this book, did you find it difficult to talk about young Marshall without telling the story of Baltimore’s black legal professionals?

As the book developed, I found it increasingly important to write about Marshall’s lawyer predecessors in Maryland who were his role models. I had not planned to write as much about these earlier lawyers. But I ultimately concluded that those people and their careers were important to understanding Marshall.

Baltimore was unique. I have for many years taught about its border-state character in a law school seminar called “Race and the Law: The Maryland Experience.” Baltimore was the most northern southern city, politically, culturally and socially, and had a very ambiguous attitude about race. Baltimore also had the most aggressive group of black lawyers in the nation.  Marshall concluded that although Maryland suffered from many of the vestiges of slavery, the state also had several scholarly and honest judges who respected the U.S Constitution.   Consequently, Marshall was able to obtain in Maryland courts several important early civil rights victories.

Marshall did not appear inspired by traditional lawyering. His civic-mindedness appeared to pull him away from the more lucrative work of law. I find it hard to tease out Marshall’s personal thoughts in your book. But if you were to speculate, what would you say were the pivotal moments that helped him focus his avocation and vocation into one?

I often wonder what direction Marshall’s career would have taken had not certain specific events occurred as he began his legal career. These pivotal moments include an automobile trip to the deep south that Marshall took with his law school dean as he awaited his bar exam results; the lynching that occurred on Maryland’s Eastern Shore one week after Marshall joined the bar; the national convention of black lawyers held in Baltimore during Marshall’s first year as a lawyer; and the NAACP national convention in Baltimore two years later.

Were there any surprises?

I was surprised at how impecunious Marshall’s immediate family was, how political and diplomatic Marshall was in his professional relationships, and how important certain mentors were in Marshall’s early development.

After all of the research, after writing the book, does knowing more about him raise or lower him in your esteem? Why?

The research raised my esteem for Thurgood Marshall because I came to understand that Marshall, while having options to develop a regular fee-producing law practice and a comfortable living, chose to become a hard-working, lowly paid civil rights advocate. In the book, the reader watches Marshall, during his first three years as a lawyer, come to realize that civil rights law was his passion and would be his career.

Tom Dawson is a Washington lawyer and lobbyist. He holds advanced degrees in philosophy and the health sciences. Tom is a fan of foreign cinema who enjoys writing and traditional jazz.