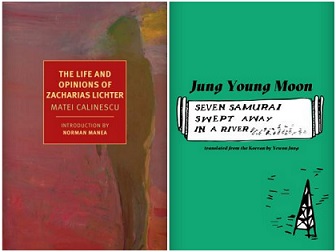 From the mists of the middle ages, a man with a freakishly long nose rides slowly over the horizon, his appendage dangling, catching the attention of the shepherds and farmers around German Strasburg. By the time he enters the gates of the town, he is drawing curious onlookers from every street corner, all of whom wish to touch his phantasmic nose.

His presence causes such a stir in the town that, unable to walk the streets unmolested, he leaves, with the promise of returning in one month.

While he is gone, the town is engulfed in speculation about the origin of such a prodigious proboscis. They gossip and argue about how God could allow such a nose to exist. Two rival factions develop, the Nosarians and the Anti-Nosarians, and the town is riven and driven into wild flights of imagination.

On the appointed day of the man’s return, the townspeople gather excitedly on the road outside of town to meet the object of their unbalanced attentions. But the man has encountered Fernandez, the brother of his former lover, Julia, and the brother has convinced him to return to Spain to reconcile with her. The townspeople are devastated that the man has disappeared, and when they return to town, they find it has been taken over by the French.

This is a synopsis of Slawkenbergius’ Tale, from Book Four of The Life and Opinions of Tristram Shandy, Gentleman. I’ve written about its author, Laurence Sterne before, and my admiration for writers who unabashedly examine, and communicate their understanding of, the workings of the mind.

All the key elements are present: sexual innuendo (sometimes a nose isn’t just a nose); association of ideas (the nose and, well, this is a family publication); irrational adherence to speculation; the tendency of humans to faction and fight against each other; mad desire; and the failure of resolution of that desire, coupled with the irony of the actual resolution. These are eternal generators of philosophical wonderment and novelistic expression.

You don’t need to have Victorian plot structures and “realistic” presentations of fictional scenes of real life to write an exciting book. I don’t begrudge anybody those structures — they can be pleasurably worked with — but they are no less artificial than Sterne’s way, which is, like Scheherazade, using the frame of man’s eternally repeating foibles to tell the same story over and over, with endless variation.

So, I thought I’d call attention to a couple of more modern writers whom I’ve encountered recently who also examine the workings of the mind: Matei Călinescu and Jung Young Moon.

Călinescu was born in Bucharest, Romania, in 1934 and lived the first 11 years of his life under a fascist regime. When World War II ended, the Communists took over. One guesses that these differing ruling parties appeared much the same to Călinescu, who finished his education in 1965 and published criticism and poetry both before and after he published The Life and Opinions of Zacharias Lichter, in 1969.

That this book was published at all, due to a political thaw during dictator Nicolae Ceaușescu’s first years in power, must have seemed a miracle to Călinescu, whose work was so subversive, the censors couldn’t understand it. But by 1973, Ceausescu had seen enough to know the ill effect this book had on discipline behind his iron curtain. Further publication of the book was prohibited, and Călinescu fled Romania for the rest of his life, living and working as a scholar in Bloomington, Indiana.

But the book went on to samizdat and cult fame, and protagonist Zacharias Lichter — vagrant, loiterer, circus viewer, and clown — became another Tristram Shandy, defining his age with irony and madness. The key is reminding people that the things they believe, the ways they act in belief, and the forces they use against those who don’t believe reveal not strength and righteousness, but only philosophical and psychological paradox both vulgar and divine.

This is from the third chapter of Zacharias Lichter:

“Circus — the lowest stage of the spiritual — may be expressed as an awareness of the absurd spectacle of our existence. Reduced to the figure of a clown, forced to play a humiliatingly vulgar role, suffering and rebelling against his state, yet knowing he can never overcome it, realizing that all his effort will be in vain, such is the man who lives beneath the coarse canvas panoply of the world as circus. His suffering and his revolt can only be expressed through irony.”

That’s worth the price of admission right there!

Jung Young Moon is our contemporary. I just met him a couple of months ago. He was on a book tour for Seven Samurai Swept Away in a River (translated by Yewon Jung), and his reading drew me — like Gertrude Stein and Laurence Sterne and Matei Călinescu — immediately in.

In this work, Moon intends to fail. Early in the book, his friends (whom he is visiting in Texas) ask him what his book is about. He says:

“It was a novel written by someone who didn’t know much about Texas because he didn’t know about Texas, a novel that didn’t really have much to say, a halfhearted attempt to come up with a series of groundless hypotheses, a mixture of stream of consciousness technique, the paralysis of consciousness technique, and the derangement of consciousness technique, a novel that even a passing dog would laugh at, and after I said these things they rang true and my friends seemed perplexed, and I said the novel was going to be a disastrous failure to be mocked by everyone we toasted. But…that failing to write a failure wouldn’t really be a failure, so the fear of failure wouldn’t weigh you down as heavily as you wrote.”

Again, that just transports me! It’s madness. It’s the reflection of a reflection, ad infinitum. It’s purposely not telling a story, but still conveying the ineffable stuff: striving, intellect, humor.

I wish I could say more, but I’ve probably taxed your mind enough. If not, seek them out and read them. Let your mind play!

The Genius of James Boswell

Samuel Johnson's biographer set a high bar for the rest of us.