The Genius of James Boswell

Samuel Johnson's biographer set a high bar for the rest of us. 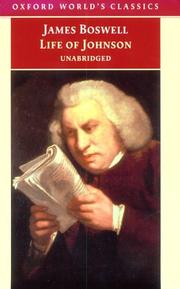 I’ve had the good fortune over the last 10 years to be associated with the Washington Biographers Group. I joined them because I was seeking the methods and perspective to tell my father’s story. More than simple biography, I was interested in finding a narrative for my personal knowledge and a means to fill in the gaps in that knowledge.

I make no claim to be a biographer of the caliber of Kitty Kelley or Brian Jay Jones or Barbara Burkhardt (or even David O. Stewart), but I have, I daresay, the same curiosities about narrative as the greatest biographer of them all, James Boswell.

Boswell is best known, and should be entirely better known, for The Life of Samuel Johnson, which, in 1791, pretty much invented modern biography. Dear friends, if you’ve never taken any advice from me in your intellectual ramblings, read (or better yet, allow to be read to you via audiobook) The Life of Samuel Johnson. It is riotously funny, and human civilization has rarely created a hotter bed of ferment than London in the 1760s, when Boswell and Johnson commenced their historical friendship.

Because they were friends, because of the intimacy they established and maintained, Boswell saw the value of conveying his personal experience into the narrative structure of his work examining the towering intellectual figure against the actual person Johnson was. Yet, this wasn’t a miraculous occurrence in Boswell’s mythically dissipated life; it was the central animating, meditative proposition of his literary genius.

Boswell examined himself far more thoroughly than he examined Samuel Johnson. His London Journal (not published until 1950!) is now considered of equal importance to the Life of Johnson in Boswell’s oeuvre. Here is an excerpt from the London Diaries in his freshest youth. Notice the finely stated purpose of the journal. In this 18th-century Latinate, educated, British English, he is saying what Thomas Jefferson said, that a man is both his internal feelings and his outward actions. Boswell studied himself with ruthless but forgiving objectivity.

In the first three entries of the Louisa episode, we see him developing his technique. He even notes it parenthetically, “(I think such conversations are best written in the dialogue way.)” Boswell’s purpose is to display the immediacy of the scene, the powerful emotions, the need for a social veneer, as he gained intimacy. While he is going through it, he sees his amorous pursuit as an urgent, personal, dramatic scene, but also one played out endlessly by humanity. (And the parentheticals are beautiful stage-directions.)

However, Louisa in particular (with whom Boswell behaved poorly), and love in general, were only a minor concern to Boswell. He was born to be Lord Auchinlek in Scotland, but he wanted to live in London. His domineering father forced him into duty as a lawyer and representative in Edinburgh. The obliging son gave into conformity and married his first cousin, with whom he had five children.

Really, though, James Boswell wanted fame and to be among the great. In this, he was a recognizably modern citizen. He could transcend his backwater upbringing in a meritocracy. Of course, he had every benefit in education and opportunity, but his ambition drove him to London (where he met Johnson in 1763), and onto the Continent (in 1765). There he met Voltaire and Rousseau, who suggested that Boswell visit with the Corsican rebel Pasquale de Paoli.

At the time, the British were fighting the French, and independence was in the air in Europe. Boswell, one of those naturally and intently ingratiating people, published a travelogue that revealed a biographical narrative of Paoli in An Account of Corsica, in 1768. Boswell was 28 years old, had known Johnson for five years, probably knew he wanted to write about him, and had begun to outwardly practice his art.

He was already dealing with such issues as: How can one person reveal another in written language? What traits are best highlighted? How do the quotidian and the mythic interact and bond? The Account of Corsica was a success, and Boswell attained the kind of fame that his peers in Joshua Reynolds’ Club required to join them.

Several years later (and after many piercingly rapier-witted retorts about Scotland and the Scottish from his beloved mentor), Boswell prevailed upon Johnson to travel to the northernmost reaches of the British Isles in the fall of 1773. Like the London Journal and the Account of Corsica, the Journal of a Tour to the Hebrides is a daily accounting of Boswell’s personal experiences against the backdrop of his admiration, in this case, for Johnson, and his anxiety to show him that Scotland is a majestic and wondrous place.

This book also made clear to Johnson that Boswell most certainly could and would write his biography. They must have talked about the innovative structures that Boswell was using. Johnson had written a number of biographies in The Lives of the Poets and was an essentially conservative person. He might have humbugged Boswell’s technique, but they loved each other.

After Johnson’s death in 1784, Boswell spent seven years bringing the Life together. Here is a comment from Richard Altick, a scholar from the 1960s: “The man who is the subject of the biography [Johnson] is constantly placed in a social milieu. He is surrounded by others, and their interaction, as mirrored by their conversation, provides an unexcelled immediacy of impression, both of him and them.” So many biographies have this dual idea in the title, “The Life and Times of…”

Boswell perfected that style, and it’s a balance that modern biographers, such as those in the Washington Biographers, still strive to attain.

Y.S. Fing is imagining a story where Johnson and Boswell meet Laurence Sterne somewhere in London in 1765. What hilarity ensues!