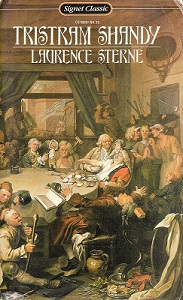 My reading interests are always in the life of the mind. What goes on there? Where does it come from? How can the mind be regulated? That’s one reason I love 20th-century literature, because the mind came to predominate writing in a liberating and vastly expansive way.

But the great modern novel was actually written (imho) between 1759 and 1767, by a northern English Anglican arch-prebendary named Laurence Sterne. A 900-word column like this can only be lame in relation to his masterwork, Tristram Shandy, but few works reveal the mind so well. It is written in a stream-of-consciousness style that predates Joyce by 150 years.

It’s actually quite refreshing to read a deep, compelling, funny book, and not to be forced to seek its Freudian meanings at every turn. Still, sex drives the narrative. Desire and impotence are forever intertwined, yet incapacitated, unfulfilled, interrupted.

From the first lines of this 800-page book: “I wish either my father or my mother, or indeed both of them as they were in duty both equally bound to it, had minded what they were about when they begot me”; to the last, “A COCK and a BULL, said Yorick, and one of the best of its kind I ever heard,” sex is “the force that through the green fuse drives the flower.”

Let’s consider that first quotation more closely. He’s saying that during the sexual act which caused his life to begin, neither of his parents “minded what they were about.” He goes on to suggest that the “animal spirits” that were interchanging between his parents in the primal act were disturbed when his mother asked his father, “Pray, dear, have you not forgot to wind up the clock?”

Sterne didn’t have to use Freudian mythologies because he had Lockean epistemology, which, in paraphrase, demonstrates that the mind works by association. Words and their various associations are a central theme in Tristram Shandy. Sterne even makes his debt to Locke clear when he says Locke was writing the history of a man’s mind. What Locke wrote in his philosophical wanderings is what Sterne takes as his landscape, putting into practice the many ideas the Locke had, and playing them out.

Thus, after Tristram’s Uncle Toby is grievously wounded in the Battle of Namur, he spends the rest of his life recreating battle scenes in order to ride out his hobby-horse. It’s like the characters get Locke-d into their obsessions and can never escape them. Tristram’s father has a few hobby-horses, noses, proper names, and contracts, and every one of his elaborate and overdone expectations is dashed.

Enjoyable as it is, it’s a famously difficult read. Sterne’s is a scintillating mind, effervescent, self-denigrating, and triumphant. His 17th-century English, the barrage of innuendo, the digressions within digressions…

Unless you are, like my wife, some preternatural intellect capable of grasping others’ conceits in a moment, you would do better to read Tristram Shandy in a group with people who have open minds and who like to bandy about with the ineluctable and paradoxical.

For myself, my breakthrough in comprehension came as I delved into Sterne’s biography and discovered that he had lived most of his adult life as a low-ranking official of the Anglican Church in its second most sacred British home, York.

Once Tristram became a smash hit in London in 1760, he fled his pastoral obligations at the same time that he published his collected sermons as The Sermons of Mr. Yorick. My great discovery, after reading and enjoying (as did Thomas Jefferson) the Sermons, was that Sterne had taken one, “On Conscience,” and re-presented it in a fuller context than just an arch-prebendary preaching in a cathedral in York.

In Tristram, the sermon is by a preacher, Yorick, who is already dead, but it’s read aloud by a Corporal Trim, who is Uncle Toby’s devoted friend and servant. In the room with him are Uncle Toby, his brother Walter, the father of Tristram, and a Catholic quack named Dr. Slop, who will, shortly after this scene, deform Tristram’s nose by botching his delivery with forceps. They all interrupt the text of the sermon with their hobby-horsical responses to the moral exhortations contained. Imagine a Monty Python sketch…

The sermon, all of six pages, is sincere and ends with a hopeful note that both morality and religion are there to help the conscience in a wicked world. The treatment in Tristram occupies 13 pages and is rife with the irony that Sterne could never preach, but offered me the key to understanding his meditations.

We know our ideals are unattainable. We know we’re bound to fail, to fall short of our goals. And even if we get what we want, we’ll be unsatisfied. But we should keep trying. Failure should be accepted and not struggled against, for we come closest to our ideals when we share our failings and frailties with each other.

As a result of his writing and shameless (truly modern) self-promotion, Sterne toured Europe to be feted by and introduced to the great thinkers, writers, and artists (Hume, Voltaire, Goethe, Diderot) in France and beyond. Few authors in history have gone from such quiet, sickly desperation to such Olympian heights.

Sadly, Sterne was unable to enjoy his acclaim and notoriety for long. He’d always had bad lungs and poor health, and he died in 1767, shortly after publishing his second great work, A Sentimental Journey, which is a book we’ll explore in another essay soon to come.

Yorick is the common thread through the three books, so we’ll consider the part he plays in Sterne’s writing. By examining Yorick, we can further discern the idiosyncrasies and pleasures of Sterne’s mind, a veritable treasure trove.