An Interview with Thomas Dolby

The former rocker talks music, memoir, and “She Blinded Me with Science.” 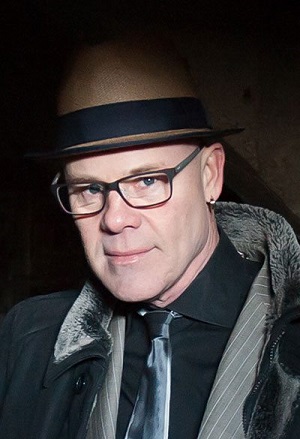 If taking only a cursory glance, it might be easy to label musician Thomas Dolby a classic one-hit wonder. While he’s scored several Billboard Top 100 hits, it’s 1982’s “She Blinded Me with Science” that will forever remain his signature song and video. A staple of MTV’s early days, Dolby continued to broaden his musical palette — often to the detriment of traditional commercial success. He didn’t care. In fact, he thrived on going in new directions, seemingly reinventing himself every decade or so.

In the 1980s, he was the techno-music whiz who produced an ill-fated Joni Mitchell album and performed alongside Stevie Wonder, David Bowie, and other greats. In the 90s, Dolby moved his family to the Bay Area in the nascent days of the dot-com boom. There, he founded a company, Beatnik Inc., that helped pioneer the advanced use of audio in the earliest stages of website design. He emerged from that experience a rich man, now under even less pressure to bow to dictates from the commercial marketplace.

Most recently, he’s been working at Johns Hopkins University as its first Homewood Professor of the Arts. He’s helping to create a new center that will serve as an incubator for technology in the arts.

We spoke recently about his life, his work, and his new memoir, The Speed of Sound: Breaking the Barriers Between Music and Technology.

Two things struck me as I was reading your excellent memoir. The first was to see how early the seeds of music and technology appeared in your life. Even as a teen, you were interested in those things, and, obviously, it has played out in your life. The second was what a good diarist or archivist you were. How much of the material in the book is remembrances, how much came from your own diaries? What was the mix?

Yeah, well, I found an old box with all my old Filofaxes, palm pilots, and yellow pads. Everything I had kept. Notes and journals going back to the early seventies, and that’s what sort of prompted me to put it together as a memoir. My original plan was to keep it in a journal's format and fill in the blanks, but the publisher thought that wasn't the trendy way to go, so he tried to persuade me to put it all in first person and put it in past tense. I was worried because I didn't want to write a music-tech-guru book which would have all the benefits of hindsight. What I liked about the journal was that I really wasn't clear what I was doing.

You worked with so many amazing people: Stevie Wonder, Michael Jackson, David Bowie. I didn't know you produced a Joni Mitchell album. You talk about it in the book as a less-than-wonderful experience. Was it “Dog Eat Dog” from 1984?

'85 actually. Joni Mitchell’s “Blue” was one of the first albums I ever bought with my own money, so it was a huge honor when she asked me to work with her. It ended up not being that great an experience. I was probably a bit of a brat at the time, as well, and things didn't work out too well. The album was quite electronic, and I think that her fans didn't receive the album well and they [wanted] someone to pin the blame on, and that was me. I'm still glad to have done it. To be touched by that much grace and genius was very fortunate.

You had more positive interactions with people like David Bowie, and Jerry Garcia and Bob Weir from the Grateful Dead, and performing “The Wall” live with Roger Waters. You had some interesting experiences with Michael Jackson, too. I know you didn't record together, but you spent some time with him.

I did, yeah. I mean it's a strange coincidence. He was in London and was editing the videos for “Billy Jean” in the edit suite next to me, when I was doing “She Blinded Me with Science,” and we actually met at the water cooler one day and got talking.

So, much to my surprise, he'd heard of my music and was very curious about the equipment I was using and production techniques. He said, you know, “Well, look me up if you're ever in L.A.,” and on a very rainy night a few months later, I was in L.A. doing a live TV show. I was jetlagged and suffering from mononucleosis, and my record had just taken off in the States, and I had this entourage of record company executives who wanted to take me out on the town. I had images of me being hauled around Sunset Strip by these execs and their limo.

I said, “Well, actually, I've arranged to see a friend tonight.” They sort of handed me a silence and said, “Well, go ahead, we'll drop you off wherever you like.” Basically, the only Los Angeles number I had in my Filofax was Michael Jackson's; to my surprise, he answered himself and said, you know, well, come on over. So I spent the rest of the evening at his mansion in a casino. It was bizarre, but it was very enjoyable.

“She Blinded Me with Science” has an interesting creation story. It sounds as if you'd plotted out the video first, almost like you'd made the movie first and then wrote a soundtrack song. Is that right?

Yeah, I came up with a storyboard for a video. I'd recently seen a Japanese magazine awarding a Young Scientist of the Year in 1981. I took that as kind of amusing. If I was going to be a scientist, I'd need a hot Japanese lab assistant and I'd need a cool vintage motorcycle hat, kind of an homage to deranged scientists. I phoned up this famous TV scientist for the BBC, Dr. Magnus Pike [to appear in the video].

The record execs liked the idea of the video, but said, “Where's the song?” I said, “Oh, how about I bring it in on Monday morning?” and went home over the weekend and did the first bit of the song.

You’re now at Johns Hopkins. How did you end up there?

Well, they were looking to launch a media center. Johns Hopkins took over an old abandoned art-deco cinema, and I helped them turn it into a media center. I designed my studio and I've been teaching music. I'm also helping people at the conservatory, which is one of the most honored conservatories in the USA. So I've been living here for the last two-and-a-half years. [My family and I] really like Baltimore, so we're gonna try and stick around for a few more years.

There's a tension at the heart of your work and your life, and I don't mean that in a melodramatic way. You've reinvented yourself professionally several times. You've had what I would call an expansive life, and yet in the book, you say that your motto should be “Small is beautiful.” I wonder what you mean by that.

The way I keep my creative juices flowing is by deliberately launching headlong into an area that is rather mysterious and unknown to me, and this is frustrating for the people around me because where I have commercial success they would like to accumulate [money] and be part of a team that turns that into a fortune.

Fortunately, I’ve been able to pay the rent for years without having to worry too much about commercial success. But I think there is an underlying tension between art and commerce, and I often wonder if I'm doing the right thing. I think, in the long term, it has paid off. Sometimes I turn my back on the most obvious commercial route. The fact that I've kept coming up with reinventions and explorations, that's what's kept it fresh for me.

Michael Causey writes about music for Washingtonian, Bethesda Magazine, and other publications.