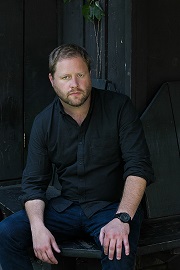 In his new novel, The Perfect Liar, Thomas Christopher Greene proves once again that there’s nothing more enthralling than an unreliable narrator. But in his novels, we’re never really certain if the narrator is the only one whose words we shouldn’t trust.

The Perfect Liar tells the story of young widow and mother Susannah, recently married to Max, an artist whose charisma competes only with his physical charms. The new family of three moves into a beautiful home in a Vermont college town, where everything seems idyllic until foreboding notes start appearing on Susannah’s door: “I KNOW WHO YOU ARE.”

To say Greene’s thriller is a page-turner doesn’t do it justice. The plot and characters are far more complex than we’re first led to believe, and the author admits that keeping the truth from readers until the perfect moment of reveal was quite tricky.

“People read to discover, to find out where the story is going,” he says. “Part of revealing plot twists is doing it at the right time so you don’t disappoint the readers.”

Regarding the surge of unreliable narrators in thrillers, Greene explains that it helps keep people interested in the plot, particularly at a time when we look to fiction for escape.

“With all the competition for people’s time and entertainment, when they read, they want to be completely immersed in a book,” Greene says. “One of the beauties of psychological thrillers is that you can binge it the way we do with television or other forms of entertainment.”

Greene didn’t begin his writing career immediately. When he was 18, he left college for a year to work on the presidential campaign of Michael Dukakis.

“Had we won that election, I would have ended up working in the White House,” Greene jokes. “But we lost badly, so I ended up in my hometown in Massachusetts. I was figuring out what to do with my life, and I had always been a reader. That’s the first time I started to write.”

Like a lot of young people who started out reading Jack Kerouac, he began writing a novel about his life, but admits it was “terrible writing and not very interesting.” Greene decided then to go back to school and take some creative-writing classes. He later tried penning short stories, none of them thrillers.

“I actually started out writing love stories because I wanted to write [about] topics that appealed to me, such as relationships and people,” he says. “I think I found my way to thrillers by writing about obsession more through the lens of love and passion than thrillers.”

For Greene, getting into his characters’ psyche in The Perfect Liar wasn’t as difficult as it might seem considering their deeply flawed, complicated personalities. But it wasn’t easy, either.

“The characters were so real to me, so much more flawed than most of us,” he says. “People behaving badly in general are more interesting than people behaving well, and I think there’s something about watching people move down rabbit holes we never would. One of the tricks of writing fiction is creating problems for your characters and watching as they overcome them.”

Although a full-time writer, Greene also has another extremely demanding job. He’s the president and founder of the Vermont College of Fine Arts, which he launched after an historic college in Montpelier was about to close three critically acclaimed MFA programs.

“I was naive enough and had enough hubris to think that I could create a new nonprofit, start a college, save the campus, and create a new institution, which I spent two years doing,” he says.

“I was successful, and I’ve been running it ever since. We’re one of the top fine-arts graduate programs in the country, especially for writers. In fact, half of our students are writers. But we also have graphic designers, filmmakers, musicians, and visual artists.”

Despite his busy schedule, Greene is already working on a new novel. And though he can’t reveal much, he does say that the story deals with a bartender/aspiring screenwriter in New York City who receives a stipend and a guesthouse from a wealthy patron to work on his screenplay.

Of course, it’s all far too good to be true and, says Greene, “he stumbles into a new world where something very different is going on.”