An Interview with Martha Anne Toll

The debut novelist talks ballet, the Holocaust, and leaving JFK on the cutting-room floor. 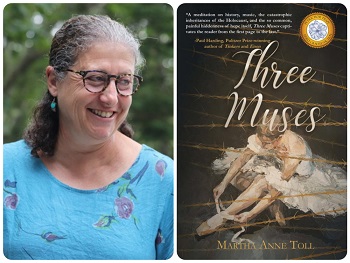 The former director of the Butler Family Fund, a member of the PEN/Faulkner Foundation’s board of directors, and a longtime social-justice advocate, Martha Anne Toll is also an accomplished writer. Her essays and book reviews have appeared in the Washington Post, Pointe Magazine, the Millions, and NPR, as well as the Independent, while her fiction has been published in Catapult, Slush Pile, Poetica E Magazine, and many other outlets. Her debut novel, Three Muses, which comes out today, won the Petrichor Prize for Finely Crafted Fiction from Regal House Publishing.

In this novel full of complicated characters, the first that really grabbed me was Frau Koch, who — without ever being kind or gentle — saves protagonist Janko from dying in a concentration camp. How did you conceive of such a complex and contradictory character?

Frau Koch grew on me. She was in my head as soon as I started writing Three Muses; I always imagined a cook at the kommandant’s who was responsible for feeding Janko/John. As I spent time with her, I began to wonder about her own oppression, having to work in that murderous, psychotic environment. I wondered if she, unlike those around her, had any humanity left, and if she did, could she hold onto it? It is very hard for me to access these questions and consider any humanity when thinking and writing about the Holocaust, but I feel that as a member of the human race, it is my duty. If we do not hold onto our humanity, exercise it, and act with intent, we risk falling into bigotry and genocide. I believe no one is immune from these risks. We see these issues rising up in our country and around the world every day in terrible ways.

The novel stretches from 1944 to 1973. What were the challenges of covering that much history?

These dates came with constraints and helpful guardrails. Because I was writing about a Holocaust survivor, certain dates had to be fixed if John was to be in his 30s for most of the novel. But you’re right, there are challenges in covering so much history. I wrote a lot of backstory that ended up on the cutting-room floor. For example, at one point, I had 20 pages about President Kennedy’s assassination, but none of it made it into the novel. Sometimes, I cut too much history and had to add it back in. A very helpful reader suggested I end the book with a look into the future. I thought that was a good idea, so I added the section from 1973. The challenge is to set the reader in a very specific time and not go overboard! I did specific research about specific years, but again, I ended up not using a lot of it. So, while I can now describe President Kennedy’s funeral with great specificity, I didn’t end up using any of it.

The novel makes a strong case for dance as an artform that can represent its historical moment. What drew you to dance as Katya’s art form?

I wish I could say this was a rational choice. But Katya came into my head fully formed, and she has always been a ballet dancer. Always. What I learned over the years in writing Three Muses, and more so in talking and writing about Three Muses in anticipation of publication, is how deeply imprinted on me were my early ballet lessons, which stopped around age 12-13, due to utter lack of talent. Not only the discipline of the ballet workout, but also the joy of watching professional dancers rehearsing, stayed with me. I was inspired by the artform in general. I am an avid balletomane and just can’t get enough of watching it.

In a more traditional romance, the female artist would have to give up her work for love and family. Were you consciously responding to those tropes?

Yes. Unfortunately, we still live in a society that criticizes and condemns “ambitious” women while applauding ambitious men. In my view, a woman who is committed to her vocation is someone to be applauded in all senses of the word. I have always loved and tried to honor Katya’s dedication to her art. Ballerinas have such a short time to dance; many are retired by age 35 or earlier due to injury. I wanted Katya to have the chance to be her fullest self on stage and in the studio.

The choreographer character Boris Yanakov is abusive and controlling — a real candidate for the #MeToo Movement, except that his behavior comes 50 years too soon. How might his relationship with Katya work out differently today?

There is a lot of #MeToo, 1950s-style, in Three Muses, you’re right. So much horrible, destructive behavior went not only unnoticed, but was sanctioned, and in some cases celebrated. I would like to say things are better today, but it is not really true. We are nowhere near where we need to be. The world of the arts is still filled with terrible instances of people taking advantage due to uneven power dynamics. We have seen a few prominent figures (Peter Martins, James Levine, Harvey Weinstein) lose their jobs and reputations over such behavior, and I would hope Katya would have a different experience today.

You’ve been writing for a long time, so I’m sure you have other projects you’re working on.

I do! I am wrestling with the first draft of a surreal novel in which a girl gets stuck in a painting. I have been working on it for about three years but with significant, long interruptions, so I’m not quite there. I’m hoping to complete a draft by early 2023.

An Interview with Sue Eisenfeld

The writer talks history, Southern Jews, and releasing a book during a pandemic.

An Interview with Jen Conley

The short-story writer talks crime fiction, Jersey, and the Boss