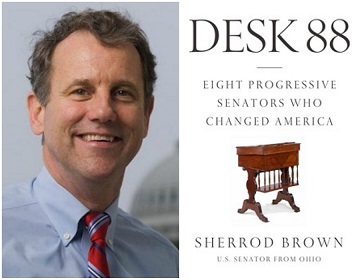 A Democratic senator from Ohio first elected in 2006, Sherrod Brown is also the author of Desk 88: Eight Progressive Senators Who Changed America. Along with featuring well-known lawmakers like George McGovern, Robert F. Kennedy, and Al Gore Sr., the book profiles lesser-known figures such as Herbert Lehman and Theodore Francis Green. Here, Brown answers a few brief questions about the book and the men spotlighted in it.

You focus Desk 88 on Democratic senators whose histories, presumably, you already knew fairly well. What’s something you learned about one or two of them that surprised you?

I worked on this book for 10 years, and during that time, I conducted about a hundred interviews, and no interview sticks in my mind more than the hour I spent on the phone with Arod Taylor, the septuagenarian son of Glen Taylor. [The elder] Taylor served a single term as senator from Idaho in the 1940s, and his story is mostly lost to history now, but as I researched him, he never stopped surprising me.

Glen Taylor was called the “singing cowboy from Kooskia” because he would regale campaign-trail audiences with songs (he must have been okay; struggling financially in between his six unsuccessful runs for public office, he once joined a western band to earn a living). When he finally arrived in the Senate, in 1945, he stood up to racist Southern senators and union-busting libertarians alike.

I can still hear Arod’s voice in my ear, telling me about his dad’s visit to Alabama in the 1948 presidential race. Daring to speak to a desegregated audience, he was arrested by the infamous police commissioner of Birmingham, Eugene “Bull” Connor. This United States senator spent the night in the same jailhouse in which, a dozen years later, Martin Luther King would write his famous letter. That was a surprise.

Were there other lawmakers who once sat at that desk whose stories you would’ve liked to include?

The one who didn’t sit at Desk 88 about whom I would have loved to write was Hubert Humphrey. When I was growing up, Humphrey was one of my heroes, and I would have loved to have included him. He was the first Democrat elected in Minnesota since the Civil War, and he did it with a populist campaign that would have resonance today, campaigning through the eyes of workers. There are lessons from Humphrey I think would apply today.

Where did you do most of the research for your book? Were there certain primary sources that ended up being treasure troves?

When I was first elected, I was immediately intrigued by the history connected to my Senate desk, because I love history, and I wanted to learn more about the institution I had joined. I think that makes you better at your job. I started buying all kinds of out-of-print books — they were all really cheap online; I guess no one else was after them — learning about these senators who had previously sat at my desk.

Some of my warmest memories of the last few years are sitting at our kitchen table in Cleveland on the weekends with my piles of old books, photocopies, and notepads — I usually write my drafts in longhand — working away on Desk 88, while across the table, my wife, Connie Schultz, worked on the manuscript of her first novel.

I learned a great deal about all of these senators. Over 10 years, I read more than 160 books about them and about the Senate. I learned much I didn’t know, even about familiar figures like McGovern and RFK. They all were pretty uneven in their public service — some really good, and sometimes not so good.

I first researched and wrote the biographies of the eight senators; it took me three or four years, and I thought I was done with the book until I showed it to Connie. Shows you how little I knew. She told me right away, “There's not enough of you in this book.” That was a revelation, and that led to the idea to include my personal stories and reflections in every chapter.

Politics feels especially draining lately. What do you read to escape?

I read lots of fiction, and I can’t wait to read the hardback of Connie’s first novel, The Daughters of Erietown, which will be published by Random House in June, since I’ve already read it three times in manuscript and galley [form].

If you could get President Trump to read just one book — not including your own — what would it be?

From one Ohioan to another: What’s the best ride at Cedar Point? (Besides the Gemini, I mean.)

Whichever ones the grandchildren choose.