An Interview with Philip Kerr

The creator of fictional gumshoe Bernie Gunther talks about his latest novel, ad agencies, and how to write a book at the office. 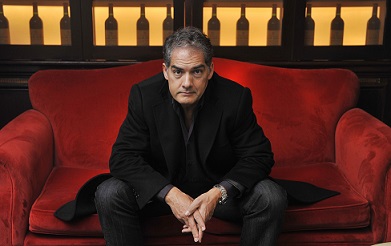 "The fact is, it's easy to recognize an evil man when you see him: he looks just like you or me,” says an increasingly world-weary Bernie Gunther, a detective struggling to define justice while living in Hitler’s Germany before, during, and after World War II. As brought to life by the remarkably versatile Philip Kerr in, most recently, The Lady from Zagreb, Bernie is our wary eyes and ears during a time and place in history when it wasn't safe to trust either sense too much.

In conversation, Kerr, whose other works include Dark Matter: The Private Life of Sir Isaac Newton and the Children of the Lamp young-adult series, is quick-witted, sardonic, and wry. (Think Hugh Grant if he grew up in Scotland.) I interviewed him at Politics and Prose in April.

When you sat down to write Bernie's first adventure, March Violets (1989), were you imagining this character would have so much stamina?

Absolutely not. I think what happens is, let me see, I was 33 when I got published, but I wanted to be a writer since I was 10. I had been writing novels since I was like 17, so my whole 20s were a kind of wasteland of, I suppose, burned careers — perfectly good careers, too. I wasted them in order to try and write novels. I've been a lawyer, I've been an advertising man, I've been a telly executive, I've been a teacher. The minute I got my first book contract, I mean, that was all I ever thought of. I hadn't even contemplated the idea of doing more than one. It was my agent who said, "You've done all this work; why don't you write a book two and three and then I'll get you a two-book contract," as they used to call it. I said, "That makes a lot of sense." Then he got me a two-book contract in the U.K., U.S., and Japan, and it suddenly seemed like, in one fell swoop, I had enough money to give up work.

Well, I'll tell you why. It's because, obviously, you have a certain facility with words, that's the simplest way of putting it. I don't know what it's like now, but in those days, it was actually a dawdle. You didn't really have to do that much work (in my own case; I suspect that's the case of others, as well). I remember talking to William Trevor about this. He'd been a copywriter, too. You could keep your novel in your top desk drawer. I used to knock out my shitty commercials on a Monday morning when everyone else would probably take a week just out of angst worrying about them. Because they never actually quite got the difference between art and artistic. So I used to knock it out really quickly on a Monday, then I'd have all week to work on my book.

And if a supervisor walked by occasionally...

They'd look around the door and they'd see you typing at the IBM Selectric that was around in those days. He'd see you hammering away. He'd assume that you were working.

There’s a lot of web stuff and fan chatter about Bernie. Do you ever look at websites like berniegunther.com?

Well, one of the raging debates they're having is whether someone new to Bernie has to read the series in published order. Does it matter?

I'd like to think they're virtually all stand-alones. If you look at the way Chandler wrote Philip Marlowe, there's no connection at all; you can read them in any kind of order. I mean, there are things that you can spot where somebody appeared in a previous book. But I always sort of try and explain things enough so that you don't actually have to have read the previous book. Equally, as you've noticed, I shift around the timeframe so there is no chronological order. I also think the readers are clever enough to sort of work that out, really, and they don't have to be led by the hand.

The two of you have grown up together. How has Bernie changed?

He's matured as a character. He's less muscular and he's a bit more thoughtful. He's less inclined to sort of hit people. Just as I am. I'm not an aggressive Scot anymore, whereas I used to be. Not according to my wife, anyway. He doesn't get the girls quite as often. Put a bit of weight on. In that respect, I think he's a more interesting character than he was in the beginning. I think the humor is still the same. My humor hasn't changed very much. I mean, it was always pretty dark.

You know what? I also think I'm a better writer than I was 20 years ago. I hope we all are. The early books are sort of raw, and some people like that. The later ones have a little bit more finesse about them.

Elsewhere, you've said you're afraid you might write one Bernie too many.

Yeah, I think I may have already done so [laughs]. Occasionally, you make a mistake and go on Amazon and read some of the reviews. Occasionally, there is a one-star review saying Bernie should get his gold watch.

Has there ever been a one-star review where you thought, "This guy or woman is pretty intelligent and they said something interesting"?

No [laughs]. You think, well, you do it then. It's like people that review books on Amazon, suggesting the thing would be better off if they'd done it anyway.

Yeah. Sitting in front of the television having a beer while they review a book.

Actually, what's good is, quite often, those are the ones that are misspelled, as well.

[Photo by Phil Wilkinson, the Scotsman.]