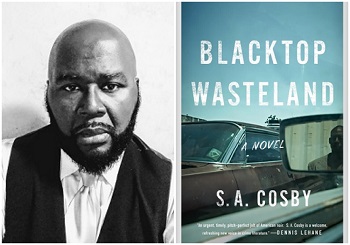 I don’t remember when I first met Shawn (S.A.) Cosby, but I absolutely remember the first time I heard him read. It’s not uncommon for wonderful writing to be diminished by a poor reading performance, but Cosby is a gifted reader and beautiful writer, and his story absolutely devastated the audience that night. A sense of excitement reverberated through the room after he’d left the stage; the enchantment of discovery, the thrill of hearing a new voice that demanded to be heard again and again.

That same sense of exhilaration is about to hit readers nationally with the release of Blacktop Wasteland, Cosby’s new novel. Multiple “Best Of” and “Must Read” lists — including the New York Times, Buzzfeed, Time Magazine, and more — are naming it among the best of 2020, and it’s destined to be nominated for awards in 2021.

The story of a man struggling to balance a life of crime with his family may not be new terrain in crime fiction, but Cosby’s haunting lyricism, evocative rural noir, and unrelenting tension set his work apart. Both the story and its author deserve a wide audience. Blacktop Wasteland isn’t simply one of the best crime fiction books of 2020. It’s one of the best books in crime fiction I’ve ever read.

(But that still doesn’t excuse his preference for DC Comics over Marvel. WHAT THE HELL, SHAWN?)

Blacktop Wasteland is such a lovely and haunting title. Can you explain what it means to you?

It’s the place where dreams go to die. The long, winding road that you think will allow you to escape but only doubles back on itself, like a snake eating its tail.

Your prose, as others have noted, is memorable. How long does it take for you to write a book?

Usually from initial concept to the completion of a first draft is nine months. I typically write a long, detailed synopsis, then use that as a guide for a final draft. Most times, I have a pretty good idea how my books will end, but no idea how I will get there. That’s the fun part.

Did this book change, in regard to concept, from start to finish?

The concept pretty much stayed the same, but some of the themes became more complex. The original idea was to write a crime story that deconstructed how much poverty influences the decisions people make in regards to getting involved in criminal activities. But it also became a cathartic release for me in respect to issues I was dealing with about tragic and toxic masculinity and the systemic racism that exist not only in the South but throughout America.

How much research did you have to do into cars?

I’ve always been a bit of a gearhead, so the research came easily to me. My uncles and cousins used to race souped-up muscle cars when I was a kid, so I went over to their houses with a six-pack and talked to them. Not only about the engineering that goes into a nitrous kit, but how it feels to be behind the wheel of a rocket with wheels.

In addition to its wonderful prose, Blacktop Wasteland is exceptionally cinematic. I know you're a big fan of other media (movies, music, terrible DC Comics rather than superior Marvel). Were there any specific influences that affected your writing?

HA! First of all, how dare you sully the name of DC Comics? But, seriously, I was really inspired by the rural B-movies of the 70s: “White Lightning,” “Gator,” “Crazy Larry and Dirty Mary,” “Rumrunners.” Films that had a specific gritty, realistic tone. Another film that inspired me was “Hell or Highwater.” There’s a speech in that film about how poverty is a disease. That speech (delivered by a criminally underrated Chris Pine) hit me like a ton of bricks. Blacktop Wasteland definitely shares a lot of DNA with those films. I think Road to Perdition (the graphic novel) was also a bit of an inspiration, as well.

Crime fiction is full of niches — cozy, hardboiled, psychological — some with a defined social cause, others less so. Where do you see this work in that world? And do you think you'll eventually step outside of that place with future books?

I hope my little niche is rural noir with a smidge of social commentary. That sounds a bit pretentious, but I truly believe crime fiction is a genre that doesn’t get enough respect for what it says about the human condition. I mean, Crime and Punishment is one of the great novels in history. The highbrow among us call it literary, but it still starts with a murder. I think I’d like to try and write something different one day. I’m a huge fan of sci-fi and horror, and I wouldn’t mind branching out into those fields. A dream of mine is to write a multi-generational epic like The Given Day or The Color Purple, but I don’t think I’m quite ready for that yet.

In addition to novels, you've earned a rep as a masterful short-story writer and reader, especially at Noir at the Bar. Are your stories written explicitly to be read out loud?

I always write my short stories as if they are going to be read aloud. To me, it gives the story a better rhythm.

What's been the best part of this process, from writing the book to finding an agent to selling it to a large publisher? What have you enjoyed the most?

Definitely writing the book. For a long time, I thought I didn’t have it in me to finish a novel. Now, I find that I prefer writing novels. I don’t think there is a better feeling for any writer than typing the words THE END on something you put your heart and soul into.

E.A. Aymar’s next novel, They’re Gone, written under his pseudonym, E.A. Barres, will be out this November. You can preorder it here.

An Interview with Seymour Hersh

The famed reporter talks bin Laden, My Lai, and how the mainstream media underestimates Trump.