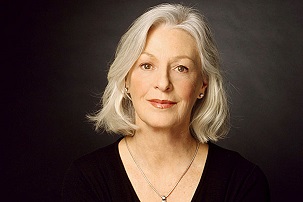 Whether it’s as an actress portraying a frightened Republican staffer in “All the President’s Men” or her real-life presidency of the National Endowment for the Arts (NEA), Jane Alexander is a person who takes her roles seriously. The two-time Oscar winner has also appeared in “The Great White Hope,” “Kramer vs. Kramer,” and “The Cider House Rules.” She fell in love with the natural environment as a child growing up in Brookline, Massachusetts. For decades, she’s been a champion of wildlife conservation and tells her moving and exciting story in a new memoir, Wild Things, Wild Places: Adventurous Tales of Wildlife and Conservation on Planet Earth.

We spoke on the phone in early October.

As you explain it, the Christian-Judeo ethic places man at the top of the pyramid of life. Perhaps it contributes to our arrogance in our treatment of other animals. That's going to be a hard thing to turn around, I would think.

Well we're certainly the apex, certainly the brightest brain, but that doesn't mean we have to have dominion over all the species and dominance, which comes from one part of the Bible. Another part of the Bible says we will lay down with the animals and we will be in the Garden of Eden together, where everybody is peaceful. Noah's Ark, and so on.

It's not that I'm trying to turn around the idea that we are a superior mammal. It's just that I'm trying to say we want to approach animals in a totally different way, with a new attitude towards them; we don't go out and just squash them. You really don't know what the elimination of one species will do to all the other species that are dependent upon it. That's one thing, the attitude.

The second one I talk about is spiritual beliefs, which is coming to an understanding that the inter-connectivity of all things is beyond our comprehension at this point in time, and the inter-connectivity is so complex that we really are doing damage when we upset one thing in the whole scheme of things. Pope John said "we must have faith that the littlest creature in the world has a place and is part of this whole scheme.”

Let’s talk about your concept of eco-martyrs. You mention a few in the book. I almost shouldn't attempt to say the name, but Seub, S-E-U-B, Naka…?

I don't even know how to say it, either. We call him "Soob," S-E-U-B, Seub Nakasakthien, in Thailand, yes. Thailand has had regulations prohibiting and protecting certain animals, and prohibiting poaching in most parts of Thailand. Meanwhile, until recently, corruption has been rampant at all levels, right up to top officials in government in Thailand, and Seub Nakasakthien really wanted to find a way to save the wild creatures, particularly at the Huai Kha Khaeng Sanctuary where my friend Alan Rabinowitz is working. He came in as the manager of that park while Alan was there.

He tried very, very hard in the year and some months that he was there to reverse the rampant poaching that was taking all but probably one tiger and a lot of other mammals, as well as reptiles, out of that park, for the medicinal trade in China, Vietnam, Indonesia, other Asian countries. Then Seub found that the very people he was reporting to very often were in on the business of poaching.

This was something that he could no longer face. It was so demoralizing and the depth of despair he went into was something he could not come out of, and he did put a bullet through his head.

You note in the book that, in some ways, it's easier for a city dweller, who's not likely to be threatened by a cougar walking down the sidewalk or something, to be an animal-rights advocate, when compared to, say, a rancher. How do you achieve that balance for both groups?

Well, a very good point. A lot of conservationists feel with more and more people moving to urban environments…by the end of the century, 80 percent of people will be living in urban environments. Conservationists in some ways applaud that, with the hope that we'll have first of all more support from the urban people, because the urban people will not face the deadly animals as often. I'm just going to talk about deadly or nuisance animals, because that's usually what the ranchers — or whomever, I'm not going to blame the ranchers, because they often are very cooperative — whoever wants to eliminate the animals out in the wilderness. That's one reason.

Of course, if you're up against an animal taking your domestic animal, and it's a chronic state of being — for example, tigers or lions coming in, taking cattle repeatedly, or even people, they become toddler killers, man-killers, whatever. It's very hard to make them change. Usually they have to be relocated, or they have to be killed. That happens all around the world.

I am on the side of certain people who have to confront this every week or month or whatever. One of the ways that you help these people is by giving them recompense for a lost animal.

Some celebrities adopt a cause, they go on a media-saturated junket to Africa or South America or somewhere. They take a quick, touristy kind of look, pose for pictures, and end up drifting away from that cause. That's clearly not the case with you. Why do you have such a strong, lifelong commitment to this?

Ever since I was very little, I just loved birds, bees, anything, every manner of thing that could be found in my suburban life in Brookline, Massachusetts. I did have a father who loved to take us on trips, short walks — they weren't even hikes, because he couldn't move that much. My mother, who was a Nova Scotia girl, a girl who summered in Nova Scotia — she was born in Boston, but she moved down from Nova Scotia where I live now as well. She was very comfortable around the natural world and wild things.

What I love most about my mom is that I had such an awful phobia, abject terror, of spiders when I was very young. When I was around 7 or 8, she just took this spider from under the eaves on the back porch. She just let it crawl all over her arm and up over her head and down her back. That image is absolutely indelible in my mind. I thought she was the bravest person in the world, and I also lost my fear of spiders.

Now I have to go Hollywood just a little bit. We're in Washington, DC, and you've had many, many roles, but I think some people in DC might know you best from your performance in “All the President's Men.” Do you have a favorite role?

Oh, my. My favorite role might have been playing Eleanor Roosevelt. I felt so lucky to be immersed in the life of that woman for two years. It was the miniseries back in the '70s and it was in two parts, three hours and four hours. Edward Herrmann had played FDR, and we immersed ourselves in the lives of the Roosevelts, right up here in Hyde Park which was not far from either of our homes at the time. We had a good year to do that before ABC gave the green light for the series. Eleanor has got to rank right up there because I found her just a fascinating woman to explore the life of. That was probably my most remarkable role.

In Washington, DC, we premiered “The Great White Hope” at Arena Stage, which went on to Broadway for several years. James Earl Jones. We both got Academy nominations, so that meant a great deal to me.

But my all-time favorite was probably “Calamity Jane” because I loved being outside. At the time, they used to let you ride. I got to hold a Colt revolver, all that kind of stuff. My own grandfather had been Buffalo Bill's doctor. Calamity Jane was very caught up like a groupie, adoring Bill Hickok and Bill Cody at the time. Anyway, those are my three top in film. In theater, I would probably have to say “The Great White Hope.”

Certainly James Earl would rank right up there, and Robert Redford would rank right up there. I'd done a couple of films with Bob, “All the President's Men” and then “Brubaker.” Bob is very big in conservation, the voice of Natural Resource Defense Council, which litigates a lot of the environmental problems that we have. I think Bob and James Earl are two of my favorites.

You also talk in the book about getting an idea for a screenplay and that that helped, in some ways, to spark at least some of the adventures in this book. What's the status of the screenplay? I know in Hollywood things can drag along forever.

While I was down there, we were together and we really hit off. On the last day, he gave me his journals to read. These were not just ordinary data, writing down data like I suspect most scientists do and we do as well. It was story of a rite of passage as a young man, moving from a scientist researching a species to protecting a species.

When I read his journal, I said, "Oh, my God, Alan, you have a book here." And I helped him get an agent in New York, and he wrote Jaguar, and it's a classic example of nature writing and rite of passage. I was jettisoning my screenplay and I wanted to produce Alan's screenplay, but it was a time when Hollywood was not making any money from films that were about the environment. They didn't make enough money from them, so they weren't terribly interested.

Last question: Do you have another foray into the wild planned?

I'm on an extensive book tour right now, so I will be on the road for about 10 weeks, until the middle of December. That's going to occupy me through the fall. I have a trip to Colombia in January, because the peace accord referendum was not fully defined. However, there's not going to be more war there, so the trails and the birding are just opening up right now. It's very exciting because there are 10,000 species of birds in the world, and Colombia has about 2,000. It's so remarkable. Ecuador also, and Peru and Brazil.

An Interview with Geraldine Brooks

The much-lauded writer discusses history, humankind’s failures, and the enduring allure of kings.