An Interview with Ronald Goldfarb

The attorney/author discusses Snowden, RFK, and his brand-new novel. 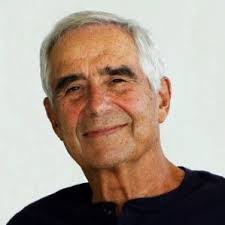 A lot of would-be novelists have a work-in-progress languishing in a desk drawer. It took about a decade, but attorney Ronald Goldfarb was recently able to free his from confinement and publish, under a pseudonym, Courtship: A Novel of Law, Love and Life as the first book from a new imprint of the American Bar Association.

Goldfarb’s no stranger to the literary world, of course. In addition to penning CapitaLetters for the Independent, he’s a respected agent and author in his own right. He’s also got a new nonfiction title out, After Snowden: National Security, Public Information, and the Snowden Aftermath, featuring analysis of the infamous whistleblower’s impact.

Over the phone and in some follow-up emails, we talked about his illustrious past working with luminaries such as Robert F. Kennedy, and what’s on his plate today.

Talk about working with Bobby Kennedy.

That, of course, was the highlight. I didn't know it at the time. When you're doing things, you never realize how special they are until they go away and don't get repeated.

I was just out of the Air Force JAG. I had finished law school. I had gotten a master's and doctorate at the Yale Law School thinking that I was going to be a law professor. In a serendipitous way, while I was in Washington, DC, I had just sold my doctoral thesis to the Columbia University Press.

One of my heroes at the time, and somebody who wrote decisions in many of the key cases that I wrote about, was Hugo Black. I asked him if he would consider writing a foreword to the book. He very kindly invited me to lunch at the Supreme Court. Being a young lawyer just starting out, that was very exciting.

He decided that he couldn't do the foreword because cases were still coming before the court on these subjects, but it was a very nice experience. I had come with my roommate from law school, who was looking for a job in the Kennedy administration. I was not. We were to meet at the Justice Department and return to New York City together.

At that time, I viewed Robert Kennedy as most people did, as over his head as attorney general. He was just a rich kid, and I had no desire to work for him.

But waiting for my friend, I met a Justice Department lawyer who took me to the office of Ed Silbering, whom RFK brought from New York to run the Organized Crime and Racketeering Section. We chatted, hit it off, and, to my surprise, he offered me a job, promising I'd try major cases. Stunned, I said I'd think it over, perhaps do it for a year. A formal offer followed in the mail, and my life made a major turn.

I had a growing admiration for Bobby Kennedy as I worked for him, saw him in a new light. I felt that he was a work in progress; I became personally engaged in the high spirit of new frontier days.

Everybody in the world knows where they were when JFK was killed. I was in Bobby Kennedy's office proposing a major prosecution at that very moment. None of us knew it until shortly after the meeting ended.

When he left Justice months later, everything changed.

After the assassination, Kennedy was attorney general in name only for about six months. Then he was urged by his friends to run for the senate. In fact, in my dealings with him, I was one of many of his aides who said he should do it. When he decided to run, he called me one night out of the blue and said, “Come be my speechwriter, or one of my speechwriters.” I did. I went to New York the next morning and resigned over the telephone. Never looked back. It was a great four years, and we won!

After many years as an agent and nonfiction writer, you’ve just come out with a novel. What’s the story behind it?

Under my hat as agent, I had sold a number of books to the ABA and had dealings with its editor, a young, very bright fellow named John Malysiak. I liked him a lot. He called one day, saying, “Ron, we're starting a new imprint. We're looking for just the right book to start it off. We're going to do fiction for the first time. It should have some content about the law, but it's not solely for lawyers; it's not a book about securities law, or bankruptcy law, or books they have done in the past. If one comes along that strikes you, we're looking for the right book to launch it.”

It happened that, years before, I had on an impulse sat down and intensely written a book in about a month. I don't know how it happened. I just suddenly had an idea. I ran to my writing pad. I don't know if you've had this experience, it hasn't happened to me before, and I just had this notion and I ran after it. It wasn't plotted out or anything. But I loved the process. When it was done, I put it away. I didn't write it with the idea of selling it.

But you didn’t forget about it.

No, I would pick the manuscript up from time to time, and I loved it. I kept rereading it and fiddling with it. I didn't show it to my wife, I didn't show it to anybody. [Eventually] I gave it to two novelist clients, just to get some feedback, and they had measured, kind things to say, which persuaded me they were being nice and professional, but that I should just leave it alone, and I did.

On an impulse, when Malysiak said that to me, I said, "You know, John, I have a novel. I kind of like it. [This author has] also written a number of nonfiction books. He’s written a book under a pseudonym because he wants to distinguish his fiction from his nonfiction. Why don't you take a look at it and tell me what you think?” He said sure.

You reviewed Glenn Greenwald’s No Place to Hide for the Independent. What sparked After Snowden?

I read the Greenwald book and the book by Tim Harkins from the Guardian. It was such a dramatic story. Both of those books stop when he left Honolulu, goes to Hong Kong, and meets up with Laura Poitras and the two authors — the adventure of running away and turning over the documents. It stopped there.

As I read those books and became more intrigued by the story, it became clear Snowden wasn’t a Julian Assange, Bradley Manning character who took public records and dumped them out to the public to read. Most people think that happened. People must realize Snowden did not make anything public. Select journalists looked over his files and then reported on selections.

I was surprised by the strong and hostile reaction of people I knew whom I view as more or less liberal progressive. I thought it would be interesting to do a book about the aftermath.

[Snowden's] a hero in places like Germany. I've heard he'd been nominated for a Nobel Prize. He's already won a human rights prize in Sweden. There are many countries that respect what he's done.

Jeni Oppenheimer interviews the author of This Cake Is For The Party.