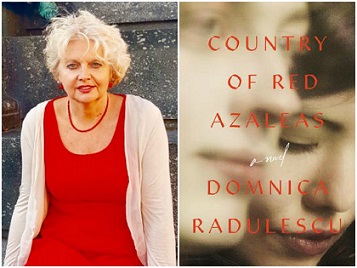 In her bright pink jacket, with matching beret and boots, Domnica Radulescu looks like a fashion model or a movie star. At Washington and Lee University, where she is the Edwin A. Morris Professor of Comparative Literature, she brings her creativity and verve into the classroom and also organizes symposia featuring an array of international authors and artists.

But above all, Radulescu is a hard-hitting novelist and playwright whose works depict the horrors and consequences of war: violent death, rape, exile, and displacement.

Radulescu is the author of three critically acclaimed novels — Country of Red Azaleas, Black Sea Twilight, and Train to Trieste — and several plays. Train to Trieste has been published in 13 languages and was the winner of the 2009 Library of Virginia Fiction Award. Country of Red Azaleas was inspired by events of the Bosnian war of the 1990s. She has recently completed a memoir, Dream in a Suitcase.

The dictatorship of Nicolae Ceaușescu was arguably one of the worst in the so-called “Eastern Bloc.” My writing, like that of many artists living under oppressive regimes, featured the use of highly metaphoric or codified language to express my own particular worldview, a sense of melancholy, and an embedded yearning for freedom. Writing under communism ignited my imagination and motivated me to create a style and an aesthetic that would escape censorship, while enabling me to tell my story and express my feelings and thoughts. I escaped to Italy in 1983, and even more than growing up under a dictatorship, being uprooted and immigrating have influenced my work. The themes of torn selves that straddle cultures and languages, and of in-between, hyphenated identities, permeate my work, leading me to produce non-linear narratives with disjointed relationships between time and space.

Do you see writing as an act of protest? Are your books political statements?

All artistic activity that emerges from the impulse to create a unique world and comment on the human condition constitutes a political statement. Any form of artistic expression that arises from the artist’s individual imagination and experience is a form of defiance or resistance to the prescribed state ideology or aesthetic. Still, I do not write to make a political statement, but rather, out of an existential need to create new worlds and tell meaningful stories. For me, writing is a survival strategy, a way of conversing with the world, history, humanity, the universe, myself.

In Country of Red Azaleas, you focus on the Bosnian War. Did you have personal involvement in that war? Why did you change focus?

Why shouldn’t a creative artist change focus and write outside the realms of her own ethnic, cultural, and personal background? Romanians admired the former Yugoslavia, which, under the previous President Tito, we saw as one of the more liberal communist countries. The violence and genocidal wars that erupted after the fall of communism therefore came as a huge shock. Many Romanians used to escape to Yugoslavia in order to get to Italy during Ceaușescu’s dictatorship, just as the heroine of my novel Train to Trieste does. It was unthinkable to me that such a country would be the site of a vicious bloodbath caused by ethnic hatred. Furthermore, the news of the mass rapes of Bosnian women by Serbian soldiers touched me to the core.

What was it like to write about such hair-raising events?

I performed a lot research on the Bosnian war, the siege of Sarajevo, the genocide in Srebrenica, and the extensive program of mass rapes of Muslim Bosnian women. I not only read articles and news reports, but also conducted extensive interviews with Bosnian journalists, artists, human rights activists, and survivors of the war, in the U.S. and in Serbia and Bosnia, between 2009 and 2011. In 2011, I personally visited Belgrade, Sarajevo, the Muslim cemeteries of war victims in Bosnia, the sinister spaces that had been used as concentration camps, and Srebrenica itself. These journeys changed me for life. I went through a very dark period following this research, but paradoxically, it was writing the novel that, while bringing me to a very dark place, also brought me into the light.

In spite of the truly gruesome situations you describe, there are elements of hope in your novels. Romance flourishes despite the horror. Female friends help each other survive. What are you trying to convey with these elements?

Finding beauty, love, and compassion in the midst of horror, violence, and loss has been for me a way of life, a constant strategy for survival, as well as an artistic credo. The ways in which people in extreme circumstances manage to survive with dignity and to create, love, and even laugh is my lifelong obsession and influences all my creative work. And, yes, sisterhood and solidarity among women in conditions of patriarchal oppression and violence is a theme that informs all my creative work.

Do you consider yourself a feminist writer?

Definitely. I believe in fighting for gender equity and in denouncing all forms of violence against women. I create works with empowered female protagonists who craft their own destinies, tell their own stories, and are complex and multilayered human beings. I explore the many forms of friendship and love between women, as well as specifically female experiences such as motherhood. However, my works are not feminist manifestos, and I do not subscribe solely to any one single feminist philosophy. Rather, I make my own feminism, like a quilt, from the great diversity of feminist ideas, which I integrate with my own thoughts, imagination, and multicultural experiences.

You recently returned to Romania. What were your impressions?

I returned to Romania for the first time in 1999, and have been returning with some regularity ever since. Two Fulbright teacher-scholar fellowships have allowed me to live in Romania for extended periods, to understand its new realities, and to experience its newly acquired freedom, particularly in the artistic and cultural realms. It is in many ways a very different country than the one I left 37 years ago. Since its entry into the European Union in 2008, it has thrived and acquired many of the characteristics of developed Western countries, in particular in the large urban areas. In some rural areas, agriculture is still performed with horse-drawn carts, and people live the same way they did a hundred years ago. Yet Bucharest and other large cities have a thriving and dynamic cultural and artistic life.

You have organized many cultural events at the university. Is cultural outreach part of your mission?

It absolutely is. As artists, we have a responsibility to engage actively with our world, teach by example, support one another, and draw from one another’s wisdom, creativity, and experiences. We must build communities of thought and artistic endeavor. Otherwise, we are only self-centered inhabitants of crumbling and irrelevant ivory towers.

How would you describe your work in the theater? The play I saw was highly experimental.

Indeed, my dramatic works are quite different in style and mood from my fiction. In theater, I allow myself all the freedom and wildness that I channel and control in my novels. I often compare writing a novel to building a house, while writing a play is like playing with blocks. I situate myself in the traditions of absurdist and surrealist aesthetics of my compatriots Tristan Tzara, Eugene Ionesco, and Matei Visniec.

I am completing an historical thriller with elements of magical realism entitled My Father’s Orchards. inspired in part by my father’s story during World War II, and Romania’s dual history of Nazi- and Stalinist-type dictatorships. The gruesome deportations and extermination of entire Jewish populations during World War II in Romania is still hardly known. I am also working on a series of stories, short plays, and essays inspired by the present global pandemic. My plans for the future are to keep writing and loving till I die.

Bárbara Mujica, a professor emerita at Georgetown University, is a novelist, short-story writer, and essayist. Her latest novel, I Am Venus, explores the identity of the model for Velázquez’s Rokeby Venus. Her previous fiction includes the international bestseller Frida, based on the relationship between Frida Kahlo and Diego Rivera, and Sister Teresa, based on the life of Teresa of Ávila. Her collection of stories, Far from My Mother’s Home (Spanish edition: Lejos de la casa de mi madre) focuses on the immigrant experience. Mujica has won several prizes for her short fiction, including the E.L. Doctorow International Fiction Competition, the Pangolin Prize, and the Theodore Christian Hoepfner Award for short fiction. Three of her stories and two of her novels have been winners in the Maryland Writers’ Association national competition. I Am Venus was a quarter-finalist in the 2020 ScreenCraft Cinematic Novel Competition. Her latest book is Religious Women and Epistolary Culture in the Carmelite Reform: The Disciples of Teresa de Ávila, scheduled for publication this fall by Amsterdam University Press.

An Interview with Arnold Lehman