“No Place to Hide”

“We stand at a historic crossroads. Will the digital age usher in the individual liberation and political freedoms that the Internet is uniquely capable of unleashing? Or will it bring about a system of omnipresent monitoring and control, beyond the dreams of even the greatest tyrants of the past?”

Probably both. But it is the essential question raised in the aftermath of Edward Snowden’s notorious exposure of our government’s policies of surveillance in its response to the awful terrorist acts of 9/11, according to freelance journalist and lawyer-author Glenn Greenwald, author of the just-released No Place to Hide: Edward Snowden, the NSA, and the U.S. Surveillance State. While the world debates whether Snowden is a villain or a martyr, Greenwald asks readers to consider this important assessment of current policies.

Profound questions will be debated long and passionately as a result of Snowden’s disclosures. Greenwald raises them in No Place to Hide. But the unique part of this book is the riveting, behind-the-scenes story of Greenwald, and his story-breaking partner, TV documentarian Laura Poitras’ recruitment, and work with Snowden in breaking the story worldwide. It is a thriller surpassing the most successful TV action dramas or bestseller spy books. It is real, as well as consequential, and Greenwald describes in exciting detail what happened. 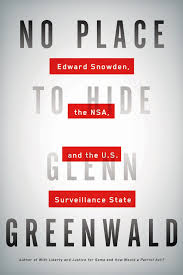 Greenwald
was approached over the internet by a mysterious “Cincinnatus,” and slowly
drawn into the inner workings of complicated communications technology — thumb
drives, passphrases, encryption, roving bugs and listening devices, malware.
Snowden had chosen Greenwald and Poitras as trusted vehicles for him “to tell
the world about the massive spying apparatus the U.S. government was secretly
building.” In Snowden’s words, “I want to spark a worldwide debate about
privacy, internet freedom, and the dangers of the surveillance state…I’m not
afraid of what will happen to me…I know it’s the right thing to do.”


Greenwald and Poitras, known and respected as independent journalist crusaders, agreed that they’d soon need the association of a press institution. Though they were critical of even the best of them, they needed the resources and support only a major newspaper could muster. Snowden, Greenwald, and Poitras would face the awesome power of the government, which would not be pleased with what they were planning to do. So they teamed up with the Guardian. (Read more about this in CapitaLetters’ review of The Snowden Files: The Inside Story of the World’s Most Wanted Man.)

The most exciting chapter of Greenwald’s book is “Ten Days in Hong Kong,” where he describes the exhausting, intense, secret meetings with Snowden, and their clandestine around-the-clock efforts to break the international story in a “hyper-cautious, cloak and dagger” effort where days and nights blended into one extraordinarily thrilling escapade.

Snowden had worked for the CIA and NSA and, at the time, for a private contractor as a high-level cyber operative. He became wrought by the government’s lack of accountability and oversight in its secret work surveilling Americans and other countries, “building a system whose goal was the elimination of all privacy, globally,” he told Greenwald.

Snowden didn’t want to destroy the system, but to allow the public to decide whether its questionable practices should go on. Neither Congress nor the essentially “rubber stamp” FISA (Foreign Intelligence Surveillance) court was providing oversight. Since 1978, FISA has rejected only eleven government applications — none before 2002. They concluded: “The process is more of an empty pantomime than a successful and meaningful check on NSA.”

To make matters worse, the Obama administration’s record amounted to “an unprecedented war on whistle-blowers.” Snowden felt he had to do something, and as Greenwald got to know Snowden, he says he “felt a duty to report the story in the spirit that had animated Snowden’s original act.”

An interesting feature of Greenwald’s book is his cynical and distrustful view of the establishment media — timid, risk-averse, obedient to the government, and, he concluded, guilty of a corrupting dynamic unworthy of the constitutional protection it enjoys. If the press allows the government to control or “neuter” its adversarial relationship, Greenwald posits, it sacrifices its essential raison d’etre. However, the Guardian — and later other major newspapers (the Washington Post and the New York Times) — became the necessary right partners, and when the story broke, worldwide media coverage followed.

Greenwald’s chapter on his own treatment by mainstream media will trouble admirers of a freewheeling, independent fourth estate. As serious press insiders reported during the earlier Valerie Plame episode, the establishment press lives on anonymous leaks. And the government participates regularly in the process. But when the words “national security” are invoked, Greenwald painfully learned, leakers and, recently, journalists are treated as pariahs if not criminals.

Greenwald’s treatment by the same press that ran after his story should embarrass First Amendment devotees. In his book, Greenwald names names and documents his claim that many top-flight media stars abdicated their roles and were subservient to the government, applying a double standard to outsiders. They have become “integrated into the nation’s dominant political power.”

Snowden’s archive of documents was “stunning in size and scope,” and its accumulation and applications had virtually no accountability, no transparency, and no limits. It was “a complex web of surveillance” that tapped into compliant domestic and foreign telephone systems, and personal computers. Billions of emails and phone calls are gathered daily in a breathtaking amassing of meta-data, most of which seemed unconnected to the terrorism and national security justification offered for the program.

All this is carried out by a vast and growing bureaucracy. NSA employs about 30,000 people to operate this system, and contracts with 60,000 private employees — Snowden was one — to conduct this operation in an acronymic collection of programs: STORMBREW, PRISM, BLARNY, and others.

Whatever else anyone thinks about Edward Snowden, and Glenn Greenwald, as well, they have forced the public to ask itself what kind of world it wants to live in, how important privacy is, what kind of First and Fourth amendments they wish to endorse and enforce, and the level of surveillance they would countenance (without reasonable checks and balances) to monitor it.

Greenwald argues that question should be decided by the public, not by elites acting unchecked. His book is a persuasive brief for that position.

The Right to Write