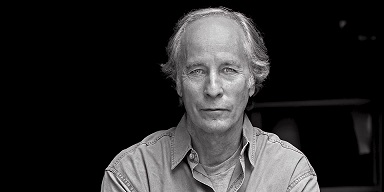 Frank Bascombe, the regular-guy hero of The Sportswriter (1986), Pulitzer Prize-winning Independence Day (1995), and The Lay of the Land (2006), is back in Let Me Be Frank With You, a collection of four interconnected novellas that take him, and us, closer to the end of a life both memorable and mundane.

While Bascombe is the loudest voice in his literary universe (so far), Richard Ford is also an award-winning short-story writer, editor, and author of other well-received novels, including 2012's Canada.

We swapped emails earlier this month.

"I often recollect such matters more positively than was true." That's Frank questioning a long-ago memory of a real-estate transaction in Let Me Be Frank With You. How "trustworthy" is he as a narrator? Is this a way for him to make reflecting on his past easier?

I don't know about such matters as "trustworthiness," relative to narrators of novels. I mean, how trustworthy is anybody — your husband, my wife? We look at the evidence, we decide. With narrators of novels, another element, however, comes into play — narrators of novels aren't people; it matters less if we deem them trustworthy. It matters most if we read what they say, understand that we're being acted on by a book, that all of the things the book purports are provisional and made up of artifice, and then try to make use of what we conclude and understand.

Why does the Frank Bascombe character keep pestering you to let him continue his story? What about him do you find so compelling?

Frank is what I would call a moderate Democrat. What would he have made of these midterm elections, where Republicans grabbed a lot more power?

Well, I really can't think of Frank as a "moderate Democrat," only as a fictional character; therefore, he'd have made of this untimely electoral disaster what I'd make him make. And I'm still experiencing it. Current events require time — in my brain — to render themselves available for fictive uses.

The first three novels in the Bascombe series center around a specific time of year or holiday (Good Friday/The Sportswriter; July 4th/Independence Day; Thanksgiving/The Lay of the Land). The first novella in Let Me Be Frank With You opens just before Christmas. Can you talk about your decision to do that and what each of those landmarks means in your narrative?

All these novellas — not just the first — occur before Christmas 2012. I wanted to make the temporal setting “visualizable” by my readers — who're in the first instance American, and nominally share a mid-December history. If you can make the time setting of a book palpable, then you're well started in making the rest of the story palpable.

Apart from that, I wanted to attach these events to the Christmas season — a season of considerable spiritual and historical moment — and see what I could make myself say. When you can affiliate what you're writing with some strong current of spirituality — e.g., Easter, Independence Day — then you tap into forces greater than just your own divinings. In this case, I think — when I got to the end of the last story — I succeeded, at least in these regards.

The novellas are interconnected, but also remind readers of things from novella to novella (Frank's first wife being in assisted-living, for example) in a way a traditional novel might not. Were these written to be read as a whole, or did you intend them as standalone pieces? It's an unusual approach — almost coda-like.

I didn't think of these novellas as a coda; I don't know if this is the last I'll write about Frank Bascombe. I'm 70. It might be. I did want the stories both to stand alone and to conjoin in making a whole. I don't know if I succeeded, though I also don't know what's "unusual" and what's not.

After the success of the Frank Bascombe novels, have you felt pressure either on yourself or from critics when your writing takes you elsewhere, such as in Canada?

I don't feel any pressure from critics at all, about anything. I long ago stopped reading book critics who write about my books. The pressure I feel is to write — as best I can — a better book than the last. I think there are, in my past, things that I've done well and, for that reason, could return to with renewed enthusiasm. Canada was such a novel. It has a lineage in previous books I've written. I'm a “comer-backer” as a writer; I return to things with new vigor, to things I haven't exhausted, and want to push on further. It's the way I get the best out of myself and also attempt to serve the reader's interests better.

Frank is pretty down on memoirs. ("Most memoirists don't have much to say, though they work hard to turn that fact into a vocation.") What's your own take on this growing publishing phenomenon?

I can't generalize about memoirs the way Frank does. I have an idea of what a memoir is; it's a later rendering of something out of memory, something important enough to be told. I don't know the rules. I guess I think that a memoir shouldn't contain made-up events; that its reliability depends on the events told having actually happened. But then the elaboration upon those events, the ways the memoirist makes the remembered events mean something — that's obviously going to be imagined.

My chief complaint pertains to the fact that some memoirs aren't very interesting, that their claim to our attention relies on the memoirist’s self-regard, not to the use we make of what he or she has to tell. I know when I read a supposed memoir and the dialogue is rendered apparently verbatim, I have suspicions that this isn't possible, and thus the entire narration is something other than factual. The next question is…do I care? And the answer to that can vary with the writerly skill of the teller. I'm a hungry reader. Tell me something interesting I can use.

In his sequel to Catch-22, Joseph Heller said Yossarian would obviously die someday, but not by his hand. Do you feel that way about Frank Bascombe? Is Let Me Be Frank With You the last we'll hear from him?

I don't know. I said The Lay of the Land was the last of Frank. That didn't turn out to be true. You can't make that promise but once and be credible. I hope if I write another book — no matter who narrates it — that it's interesting and useful to a reader.

[Editor’s note: Richard Ford will be reading at Politics and Prose in Washington, DC, on Nov. 19th at 7 p.m.]