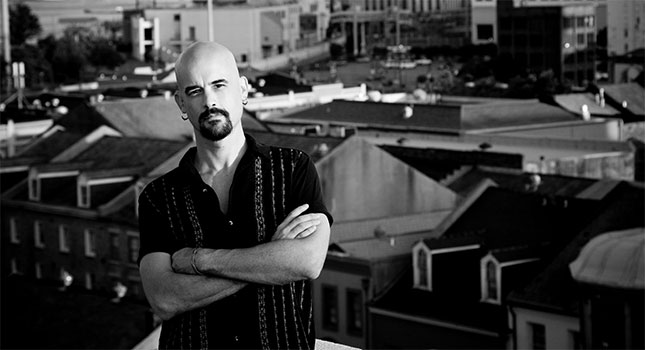 The Q&A with Bill Loehfelm

In the last days of her training to become a full-fledged member of the New Orleans Police Department, Officer Maureen Coughlin, responding to a routine domestic violence call, stumbles into a situation she hadn’t anticipated and doesn’t entirely understand. When the officers discover a stash of marijuana in the apartment, the department is eager to write the incident off as an unexpected victory. But Maureen witnesses a strange interaction between several young boys lingering near the apartment and senses that there’s more to the encounter than meets the eye. In the following days, as Maureen nears the end of her training, guided by veteran officer Preacher, the mystery thickens, and she is drawn deeper and deeper into the enigmatic underworld of a city still irreparably scarred by disaster.

This is the second book about Maureen Coughlin. Did you always plan to write a series of books about this character, or did something in particular draw you back to her?

Maureen has been around for a long time. She first appeared as a nameless waitress in a flash fiction piece I wrote over 15 years ago. She just kept coming up in my stories, sometimes with a different name in a different role, but the same basic person. She was part of a set of characters I’d had for a while. When I finally decided to see if there was a book in her, I found out there was more than one — more than two or three it seems. It’s funny, though. I never thought much about a series, and when I did, she wasn’t the character I envisioned leading it. But she is the right one, no doubt. Readers have always responded to her. There’s an energy to her, a drive to her that fascinates me. She’s so driven, but she doesn’t really know what by or where to. She’s just started asking those questions. Trying to figure out those two things is really her life story.

Maureen is a character with a deeply troubled past, drawn through a kind of strange sympathy to a New Orleans still reeling from the blows of Katrina. Why do you think people are drawn to places where disaster has occurred? Is it simple fascination or something more?

Life becomes very elemental in the immediate aftermath. You have to go back to basics and rebuild. We had no mail, no trash pick-up, no 911 service, no stoplights. Most of the city had no power, water, phones or people. Life becomes about finding the open grocery store. This went on for months. If the ease of modern life fills you with ennui, life in the disaster zone is a good cure. The infrastructure that surrounds us is more fragile than we like to think about. I know in the months and years after the storm, a lot of people came to be part of something larger, to invest themselves in a special place. Voids create opportunities. Some people came to profiteer. We’ve had an influx of people lately, the past two or three years, looking to wrap themselves in the “disaster glory.” I guess it gets them some street cred back home. And we’ve had a lot of people come who were unhappy where they were and came looking for a chance to start over and who saw that opportunity here — which is cool because that’s really always been the case with New Orleans. The city is full of people like Maureen.

The theme of police intuition runs throughout the novel: from the get-go, Maureen senses that the boys hanging out by the Garvey Apartments aren’t just friends who happened to be in the wrong place at the wrong time, and her intuition proves to be correct. But at other moments in the story, Maureen’s intuition fails her, and she leaps to the wrong conclusion. How reliable do you think human intuition really is?

Part of Maureen’s story is her learning to trust herself, her feelings, and her judgment. I think human intuition is very reliable, but I think we’re taught not to trust it. I think we often get in our own way and talk ourselves out of what we know is right, or into what we know is wrong — which is a particular problem for Maureen. We’re taught to treat knowing and feeling as separate things. I don’t think that’s always the case. And I believe it’s a very real thing in police work. I know cops who can watch a hundred people walk by and can tell you which two were up to no good.

Very often, the “system” of police bureaucracy, procedures, and code of hierarchy and respect is treated by the public as self-serving at best and morally wrong at worst. You go to some pains in the novel, however, to point out the necessity of such a system in slowly pushing forward the wheels of justice. How do you view this system: good, bad or somewhere in between?

Somewhere in between. Always. Every system is built on high ideals and then becomes a battleground between our better and baser natures, just like we are. We make an effort to strike a balance. That’s why we have bureaucracy. For checks and balances on impulses and power. One thing I wanted to look at in the book is how people who would never, ever use the word “nigger” or “fag” use the word “cop” in the same manner as those pejoratives are used, and never think twice about it. It’s a stunning hypocrisy to me. I wanted to show cops are people working within a system that has a great influence over what they can and can’t do, and that adds unique freedoms and burdens to their jobs that we rarely consider. And that affords us benefits and protections we take for granted. Every system can be better, but all are plagued by the fact that they’re full of people.

Is New Orleans still different than every other place in America, with the Napoleonic Codes, etc.? Does it make a difference in the way the story unfolds?

New Orleans is still absolutely its own place. Sometimes I think we should need a passport to come and go. It’s more a difference in attitude than the formal laws. There are definitely things down here that a cop wouldn’t look at twice that might in another city get you in real trouble.

The Devil in Her Way is a provocative title that could be interpreted in a number of ways. Who did you intend the devil to be — Maureen herself?

I wanted to leave it open to interpretation. Maureen certainly has a bit of the devil in the way she does things, and as a result, often gets in her own way — so there’s two meanings right there.

The local phrase “Believe” is ubiquitous throughout The Devil in Her Way. Where did you first hear this phrase, and do you think it reflects some particular facet of New Orleans and its people?

My earliest association with the word is actually from growing up in New York as a Mets fan. I had a pin from their ’73 pennant run that said “You Gotta Believe.” But that word, and the word “faith” became big ideas around here after the storm, especially in relation to the Saints. It’s impossible to overstate what the post-storm revitalization and success of the Saints has meant to New Orleans. They’ve been such a perfect expression of our experience in a way few teams represent their cities. We forget sometimes how precarious things were in the first year after Katrina, whether the city would come back, whether enough people would come home, whether we’d survive another hurricane season. It was such an act of faith for so many of us, believing that we could be a city again. There was very little evidence of it in the early days. It’s like with intuition, sometimes you have to believe first, and wait for the validation to come later.

In some ways, The Devil in Her Way isn’t just a thriller; it’s also a coming-of-age story about Maureen herself. It’s refreshing to see a woman at the center of such a story. What led you to choose a female heroine and build such a narrative around her?

I have to say, I didn’t choose a female heroine. I chose the best character I had on hand. She’s the right character to take my writing where I want it to go so she got the job. She’s really the result of a long process. I never sat down and made a conscious decision to write a certain kind of book with a certain kind of character.

You’re a resident of New Orleans. Do you think our literature of the past eight years has adequately delved into the trauma of Katrina as compared to, say, how our literature has responded to the September 11 events? What would you like to see more authors writing about in relation to New Orleans today?

Honestly, I have read very little Katrina literature. I’m not in a position to judge. And I am completely unable to be objective about it. It’s too personal. I’m very judgmental about where the author is from and did they live here and how long and what are their motives. There has been an effort to do it justice, I’ve seen that much. And I try to avoid disaster comparison between 9/11 and Katrina. They were such different experiences. As far as authors writing about New Orleans today, I’d like to see less cliché and more effort to get it right — which is an age-old complaint. And I wouldn’t mind not seeing “post-Katrina” on everything. The storm is a permanent part of the city, but someday we’re going to have to be just New Orleans again. I’d like to see more writing about the day-to-day, about the neighborhoods and their people and problems.

New Orleans is such an amazing place with such a unique history. Do you think its history colors the literature of Louisiana in a special way?

Absolutely. Because there is such a mix here, of histories, of ethnicities, of traditions, of even languages, Louisiana can be difficult to interpret for other people. It’s kind of its own context. You can get sidetracked trying to explain everything. On the other hand, so much of what plays out in the rest of American history, struggles of race and class and economics, has played out here, too. So you have this odd combo of this really unique place and a place that’s really representative of the rest of America. Contradictions always produce interesting results.

Sarah Vogelsong is a freelance writer and editor from Richmond, Va. Her work has also appeared in The Neworld Review and Pleasant Living Magazine.